Ideas & Inspiration► How To Explore Scotland By Train
Contents Menu

How To Explore Scotland By Train

Tips and insights for how to travel by train in beautiful Scotland which will tell you all you need to know.

There really is only one way to explore beautiful Scotland and that's by train. Whether you are day tripping or visiting for longer, train travel offers you reliability and flexibility at affordable prices.

The trains which some travel along some of the world’s most beautiful railway lines are mostly brand new or have been recently modernised; so now is a great time to be making the most of this renaissance of the Scottish rail network. 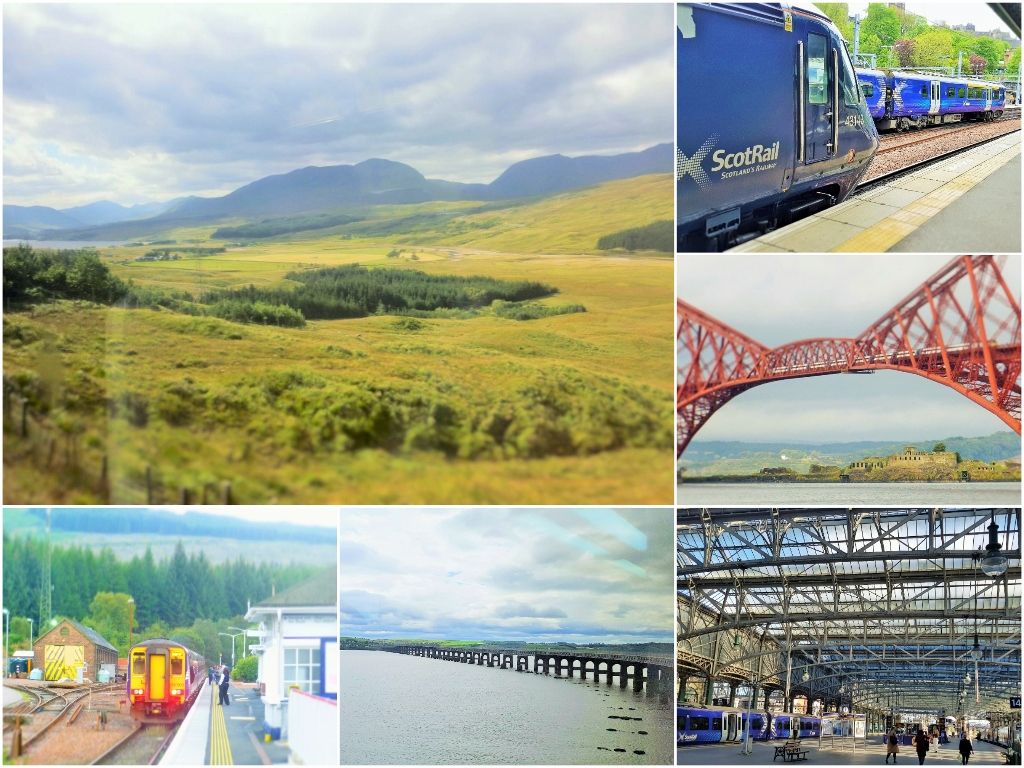 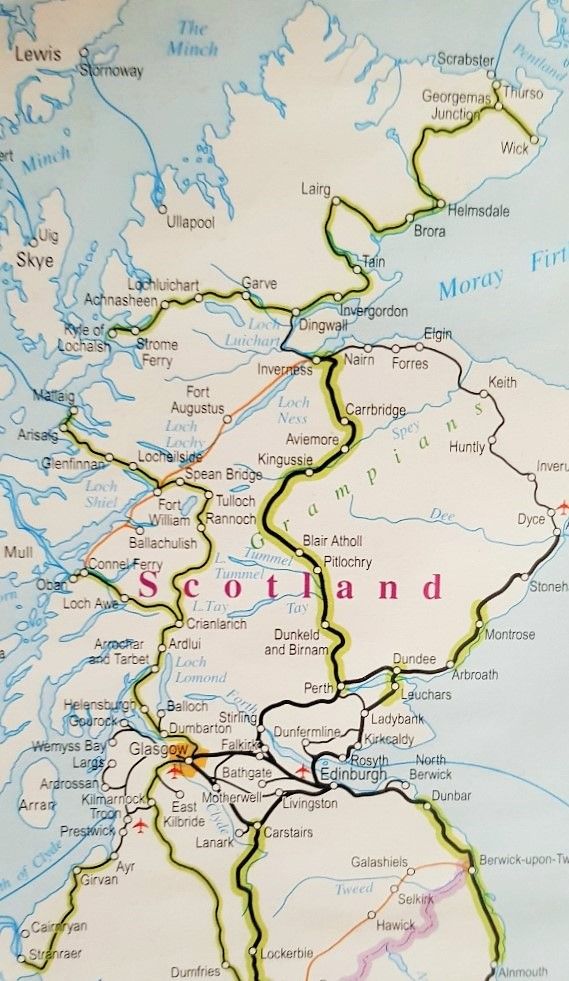 On the rail map of Europe the exceptionally scenic routes have green borders, and Scotland is second only to Switzerland as the area of Europe with the highest percentage of these green lines.
And most of the other Scottish rail routes which haven't been highlighted on that map, such as the route between Aberdeen and Inverness, are also delightful.

It's fair to say there are a limited number of routes on the Scottish railway map, but many of those that remain are remarkable survivors.
To avoid the political implications of most the stunning Scottish Highlands being deprived of trains on the mass route closure plans of the 1960s, the likes of Fort William, Kyle of Lochalsh and Thurso still have stations; the fact that travelling to them is a magical experience just happens to be a happy accident!

Head north or south from Edinburgh or from Glasgow, and in less than half an hour you’ll find yourself surrounded by Scotland’s natural beauty.
Plus in addition to the lochs, rivers and mountains, you’ll experience some of the best coastal views available from European trains. 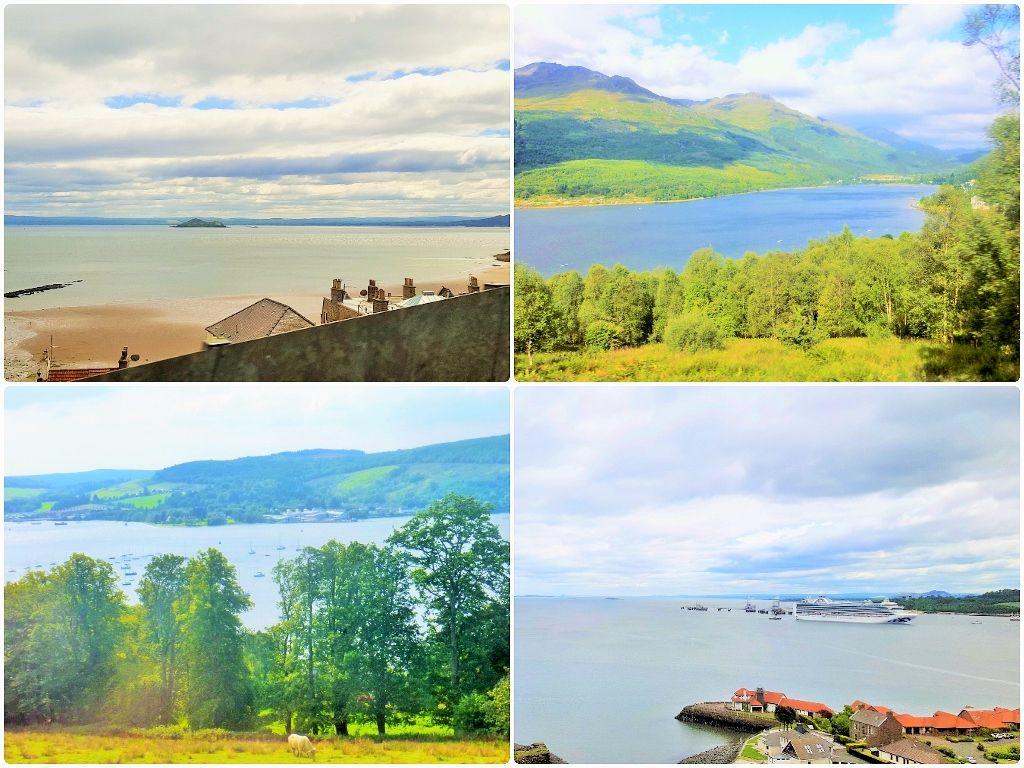 How to see Scotland by train:

There are three primary options for seeing the best of Scotland by train:

(1) Take a round trip around Scotland by train including short bus journeys and/or ferry crossings in north-west Scotland, to bridge the gaps between the railway lines.

(2) Choose a fabulous location, such as Glasgow or Stirling with easy access to a main station, as a base from which to take multiple day trips by train; check out the guides you'll find below.

The three key advantages of exploring Scotland by train over a series of day trips are:

The Scottish weather is unpredictable, as I discovered some years when a series of wet days accompanied a round Scotland circular itinerary.
However, if you use one location as a base for your exploring, you can then target the finer days for making the particularly scenic journeys.

(3) Or you could combine these touring and day trip ideas.
For example, you could head off from Glasgow to explore the north of Scotland; perhaps by taking advantage of a Grand Tour Ticket, but then ALSO take some day trips from the city.

Scotland is comparatively small, so the longest train journey takes around five hours, but on most routes you'll be spending less than three hours on a train.
And those wonderful train journeys often begin and end at fabulous railway stations! 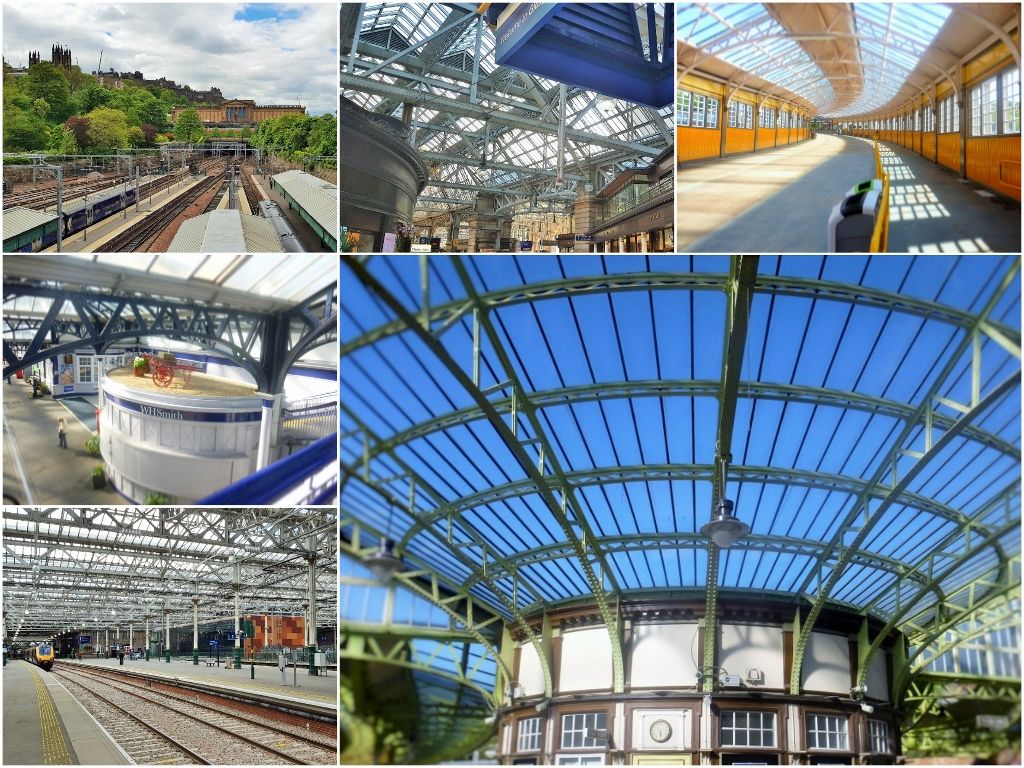 The exploration of Scotland by train is made easier thanks to ScotRail offering a range of Rover tickets and passes which can be used to hop on and off trains for a set period of time.
They can potentially save money even when making a series of day trips, so you don't need to be touring around all of Scotland by train to make good use of them.

You can head all over the country with a Spirit Of Scotland Pass, or use the Highland Rover or Central Scotland Rover to travel in a specific area.
Another ideas is to use a combination of tickets and passes, so that, for example, you can book tickets to travel by train to and from the area in northern Scotland in which the Highland Rover can be used.

The two key advantages of using the passes are:
(1) the potential to save money
(2) the freedom to be spontaneous – particularly if you use the passes to head off on day trips.

Making the Most of a Central Scotland Rover from Edinburgh

The Central Scotland Rover is best put to good use by making a series of day trips from Edinburgh to the likes of:

(1) Glasgow - what’s particularly handy is that you can use the pass to travel on the Glasgow Subway to multiple attractions outside the city centre, such as the Kelvingrove gallery and museum, the Rennie Mackintosh Museum, the Tall Ships Museum or the Riverside Museum of Transport.

(2) Stirling Castle by frequent trains and The Falkirk Wheel - take bus route/line 6 from Falkirk Grahamston station, both locations can be easily combined on one day trip.

(3) Taking the beautiful Tweedbank Railway to Galashiels and/or making the trip to North Berwick to explore its beautiful beaches; again both locations can easily be combined on one day of exploration.

The Spirit of Scotland rail passes

Spirit of Scotland passes live up to their name by allowing for travel across the country, as well as journeys over the border to Berwick-upon-Tweed and Carlisle in England.
They can also be used for free travel on the ferry services between the mainland and the islands off of the west coast of Scotland, including Arran, Bute, Mull and Skye.

Furthermore, these tickets can be used on selected longer distance bus routes operated by Scottish City Link, Stagecoach and West Coast Motors, particularly the routes that plug gaps in the Scottish railway network.

Will using the passes save money?

The first step to working out whether any of Scotrail’s rover tickets and passes will potentially save you money is to look at these maps.

The Spirit Of Scotland map

It’s worth taking the time out to do this, because the pass and rover tickets are more likely to save you money if you want to travel to locations that are the greatest distant apart.

For example, the Highland Rover is designed to save you money if you want to include Glasgow and the Isle Of Skye AND the far north of Scotland, on your adventures.
So if one of these locations isn’t on the must see list, then the Highland Rover will be less likely to be a money saver.
Though the virtues of the Highland Rover pass are detailed by the writer of this fabulous article.

Spirit Of Scotland Passes vs Tickets:

If you’re considering exploring most of Scotland mainly by train on the 8-day pass, using the Spirit Of Scotland pass will almost certainly be a money saver, even when compared with the cost of booking discounted Advance tickets.
Because the additional cost of an 8 day pass compared to a 4 day pass in effect buys you four days of unlimited travel for only £40.

For a 4-day pass, the value for money equation can be tighter, so ShowMeTheJourney carried out a price comparison, for both an itinerary based around day trips AND a round-Scotland itinerary.

(1) Making day trips from Stirling to:

(2) On an around Scotland sample itinerary including these four journeys: 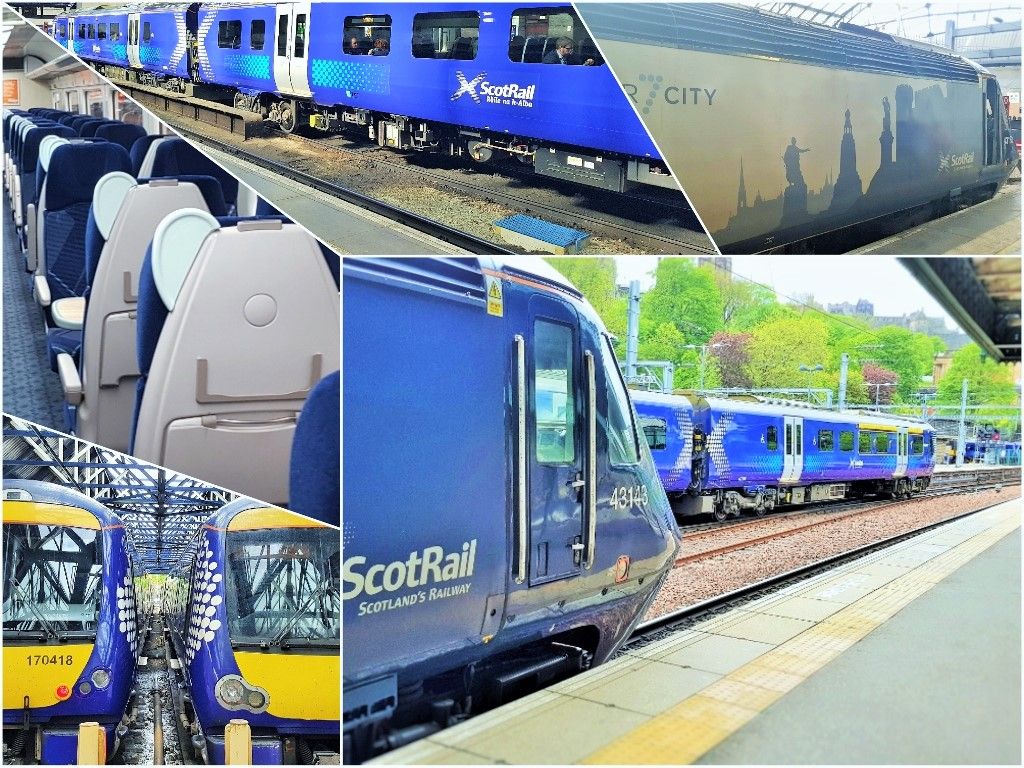 What also impacts on whether using the rovers or Spirit Of Scotland pass will be a money saver, are the types of tickets available on the routes you will be taking.
In Scotland the Advance type of tickets which are discounted, if you book ahead of the travel date, are only available on these longer routes.

To save money by using these tickets you have to commit to taking a specific train on your travel day, so if the weather happens to be poor at the time you will making your trip, you won’t then be able to choose a different train or destination.
Which is why in a location with weather as volatile as Scotland’s, the spontaneity that the passes and rovers give you, can be a big plus.

Saving With Off Peak Tickets

When travelling around Scotland by train for fun, if you will be travelling on the many more numerous routes on which the Advance tickets aren’t available, the Off-Peak tickets are comparatively cheap.
Particularly when using Off-Peak Day Return tickets to make day trips – as they can be under £2 more expensive than booking single tickets.

Off-Peak Day Return tickets can be used to travel by train from Edinburgh OR from Glasgow to multiple fairly distant destinations including the island of Arran; Bute; Balloch for Loch Lomond; Dundee, Perth and Stirling Castle.
Those tickets won't be any more expensive if you buy them at the station right before your journey.

ScotRail also offers deals for when adults travel with children – which can impact on whether using the Spirit of Scotland Pass as a family will be a money saver.

Advance tickets, which are available on these routes, will have assigned seats, but if you will be using a rail pass, you can drop in at a ticket office and arrange seat reservations, at no extra charge; although it's advisable to do so the day before your travel

To Scotland by train:

It has never been easier to travel to Scotland by train because a record-breaking number of trains now cross the Anglo-Scottish border.
In the past two years new additions to the train timetables have:

And brand new trains are now operating on all of those routes, plus on the established service between Manchester and Glasgow. 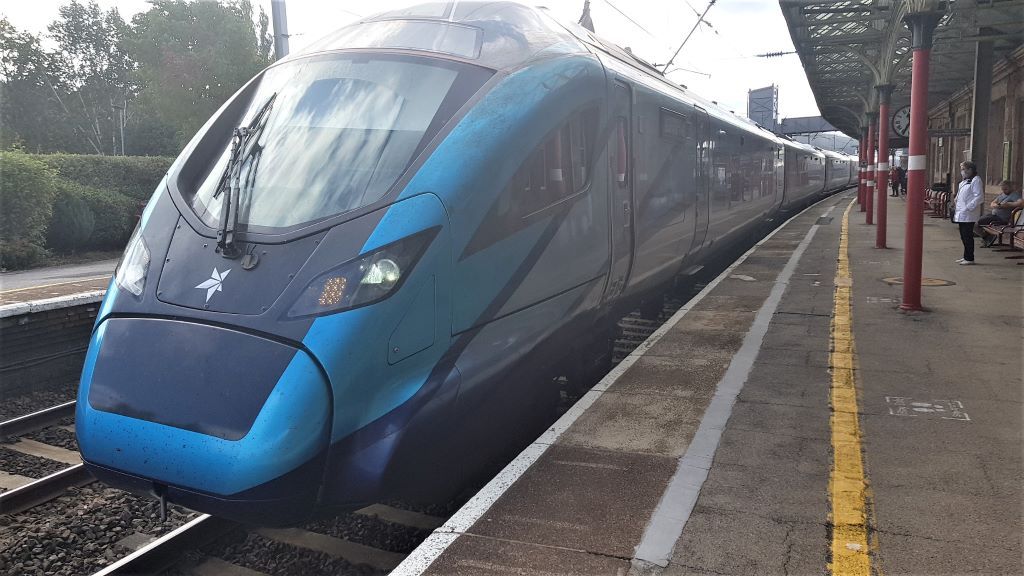 The Pendolino trains which provide the hourly train service from London Euston to Glasgow and the hourly services from Birmingham to either Edinburgh or Glasgow are also being refurbished.