Seeing Scotland By Train: On day trips from Stirling

Discover why the charming city of Stirling is a great base for exploring beautiful Scotland by train, with these day trip ideas that can simplify a railway based holiday

By Simon Harper
| about 1 year ago
UKInspireJourneysHoliday Ideas

Multiple factors came into play when choosing the charming city of Stirling as a location from which to explore Scotland by train.
Top of the list was somewhere that offered easy journeys to multiple other fabulous destinations, from a simple to access station.

Stirling ticked that box as three of Scotland’s main rail routes travel through the city:
(1) Glasgow to Aberdeen via Perth and Dundee;
(2) Glasgow to Inverness via Perth and Aviemore;
(3) Edinburgh to Dunblane.

So with days out to Bute, the Strathspey Steam Railway, lovely St Andrews, the West Highland Line and The Forth Bridge on the wish list, Stirling’s location towards the centre of the Scottish rail map, was ideal. 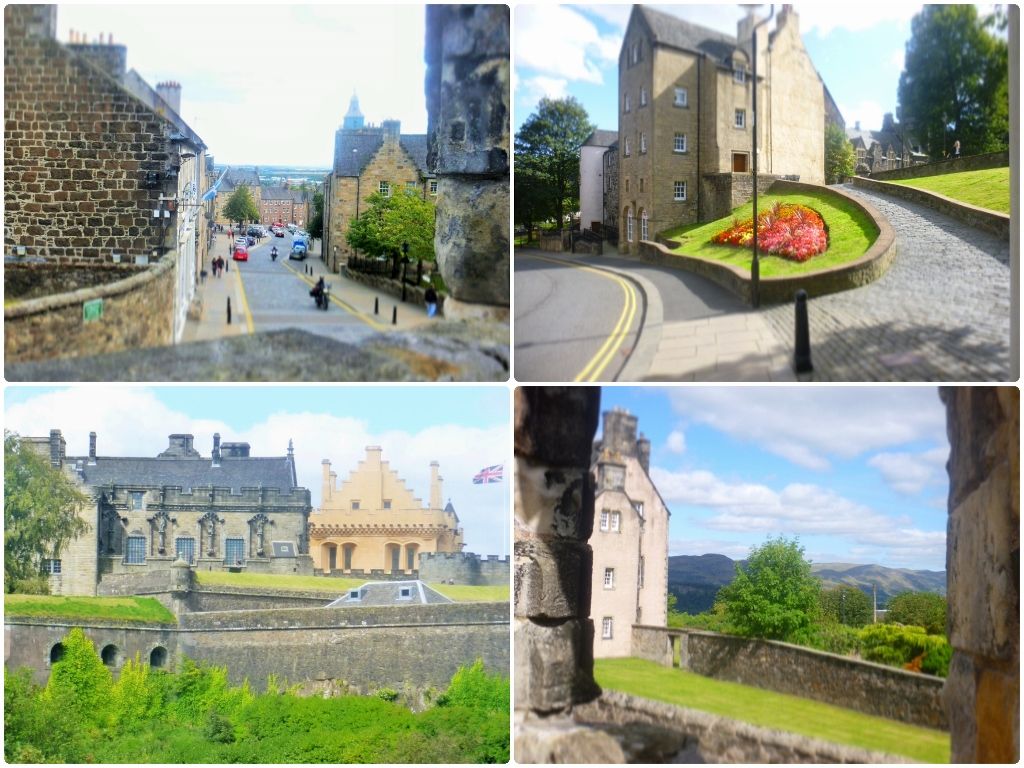 Stirling is a mere 40 minutes from Edinburgh by train, so exploring the capital is also an easy day trip.

Glasgow can be reached in just 30 minutes from Stirling, with a simple connection available at Queen Street station into the Glasgow Subway for easy access to multiple attractions across the city.
Kelvinhall is the closest station to the Kelvingrove gallery and museum, while Hillhead is the nearest station to the Rennie Mackintosh Museum.
Govan station is a five-minute walk from the Tall Ships Museum – and from there a free ferry will shuttle you across the River Clyde to the splendid Riverside Museum of Transport.

Stirling also has direct trains from London, which also call in York and Newcastle.

Scotland by train with a four legged friend 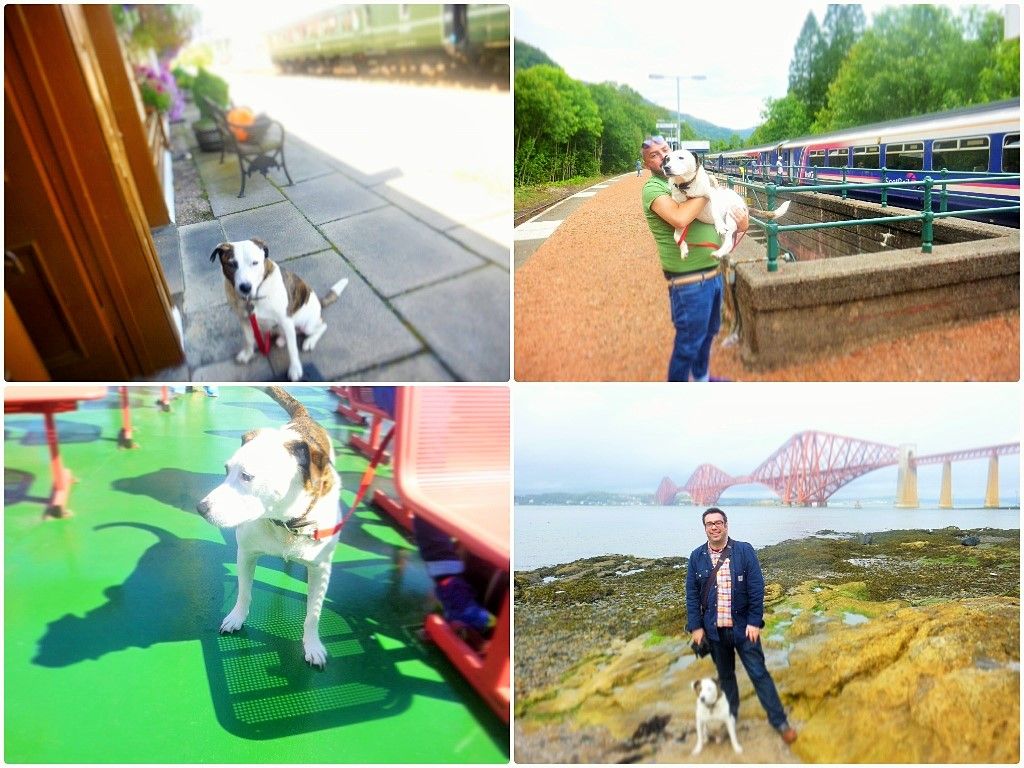 Another factor in Stirling’s selection is that that we wanted a dog-friendly holiday, to take advantage of our four-legged friend being able to accompany us on the train travel adventures.
So Stirling also ticked the dog-friendly location box and being a smaller, quieter city, it offered somewhere to relax on the days between journeys – plus there’s its castle to explore.
Being based in one location for the week also saved the bother of sourcing multiple dog-friendly places in which to spend the nights.

Though the main reason for not taking up a touring around Scotland option, was the opportunity to be spontaneous and take trips when both good weather and energy levels were in happy harmony.

If ShowMeTheJourney had been holidaying in Stirling more than 55 years ago, we could have taken direct a train across the Highlands to Oban, but the fact that we now needed to make a connection, was no barrier to appreciating one of the world’s greatest train journeys.

Trains from Stirling arrive at Queen Street station in Glasgow where simple as can be connections are available into the trains which travel along the stunning West Highland Line to Fort William, Mallaig and Oban.

It probably won’t shock you to discover that ShowMeTheJourney takes a view that spending pretty much all-day travelling on a beautiful train journey is time well spent.
Hence we exploited a sunny day to make a day trip from Stirling to Fort William.

Not wanting to rise before dawn, meant that we’d only have time to have a bag of chips on arrival, but this was a day when the journey mattered more than the destination – and heading to Fort William meant we’d experience the most dramatic section of the West Highland line to the north of Tyndrum. 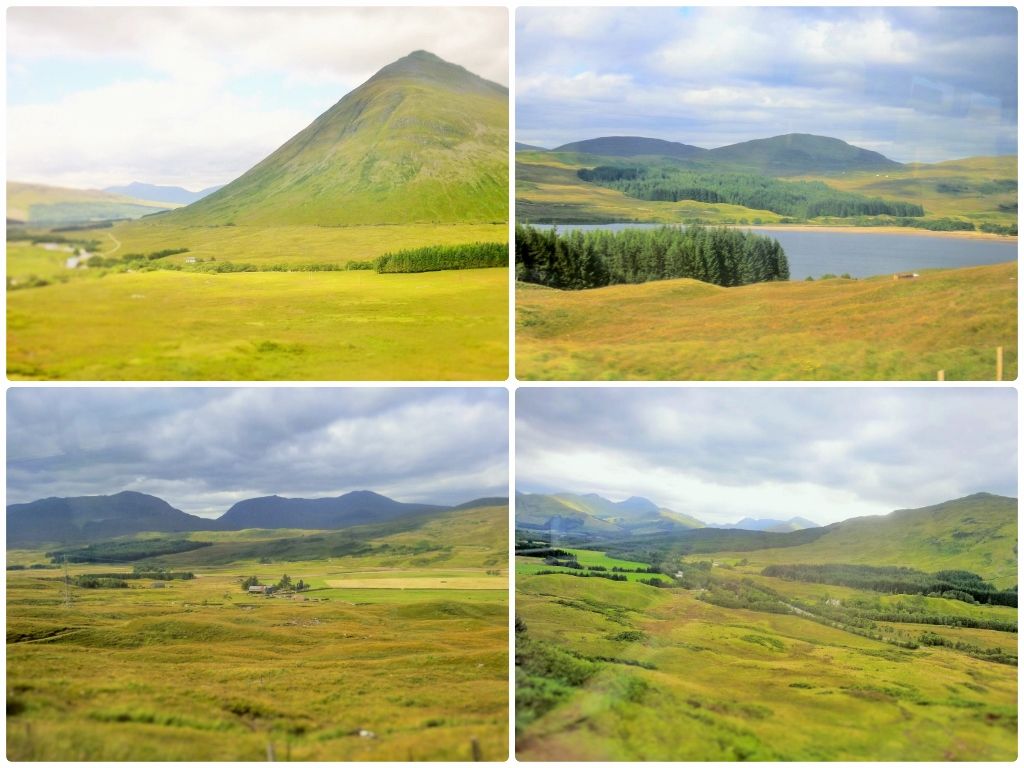 If we had been willing to set off from Stirling before 07:30 we could have extended the day’s adventure by travelling all the way to the end of the line at Mallaig.
And then rather thrillingly the first part of the journey back to Glasgow would have been a ride on The Jacobite steam train .

We could have gone to Oban

Another option which nearly won the day was to head to Oban as it combines both a charming destination and a dramatic journey.

Between Monday and Saturday, it’s usually possible to depart from Stirling after a leisurely breakfast at 09:43 and then make a simple connection at Glasgow Queen Street into the 10:33 train

Oban is pretty much the perfect location for a late lunch, and on Mondays to Saturdays the train from Glasgow will arrive there at 13:43, while the trains back to Glasgow should be departing at 16:11 and 18:11.
Even if you take that later train, you’ll have returned to Stirling before 22:10.

Making the most of the beautiful journey

No matter the destination, it’s best to take a seat on the left-hand side when boarding the train in Glasgow, particularly if the weather is fine.
From that side of the train there are lovely views over The River Clyde, Loch Gare and Loch Long. 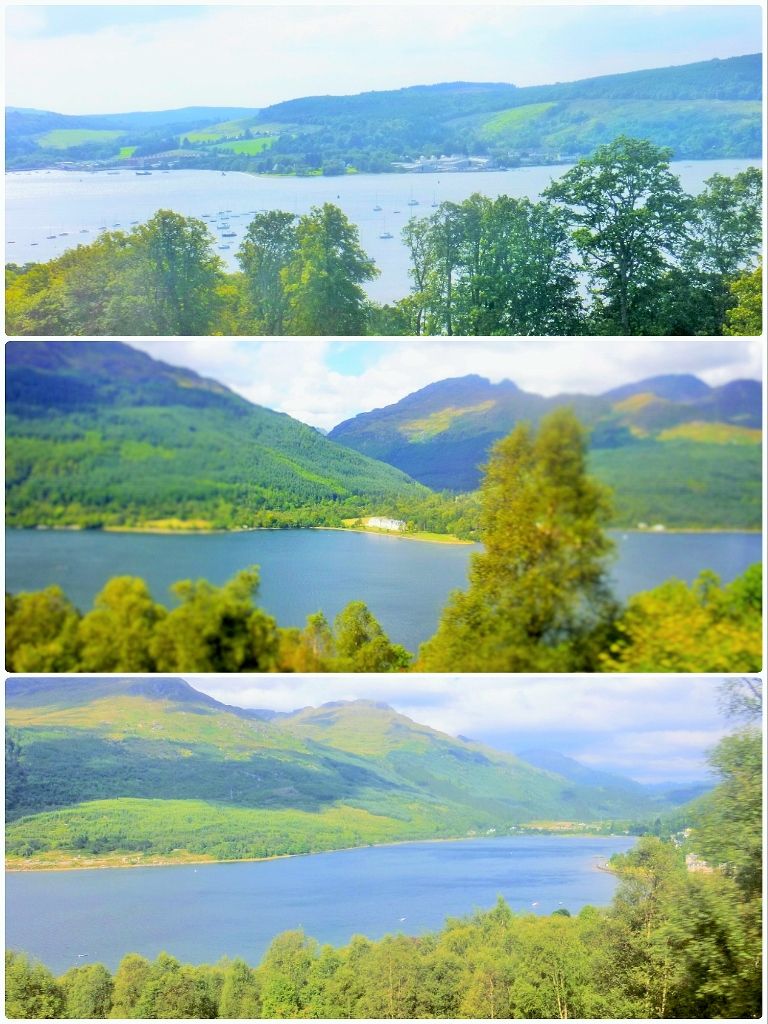 On the journey to Fort William once the train has crossed Rannoch Moor and called at Corrour station, other highlights to be seen on the left are the views of Loch Treig, the River Spean and Ben Nevis.

Or if you head for Oban, after departure from Tyndrum there are views on the left over Lochan na Bi and Loch Awe.
Though for the final 15 mins there are some spectacular sea views to be soaked up from the right hand side of the train.

At face value a day trip to the lovely island of Bute from Stirling may seem a tad ambitious, as the journey involves transferring between stations in Glasgow and a connection into a ferry.

However, in actuality it’s rather straightforward and for public transport fans, making the connections actually enhances the journey experience!

The first phase of the trip is as simple as can be, as at least two trains per hour link Stirling to Glasgow Queen Street station.
The train on to Wemyss Bay, for the ferry connection, will depart from Central Station, but it only takes 12 – 20 minutes to walk between the stations and a shuttle bus is also available.

Though even a brief trip on the Glasgow Subway is always a journey to remember, hence ShowMeTheJourney made the superfluous decision to make the one station hop to St Enoch - and then made the short walk to Central from there.

The transfer between the train and ferry to Rothesay on Bute at Wemyss Bay station is as simple as can be, with the bonus of the opportunity to experience one of Britain’s most beautiful railway stations. 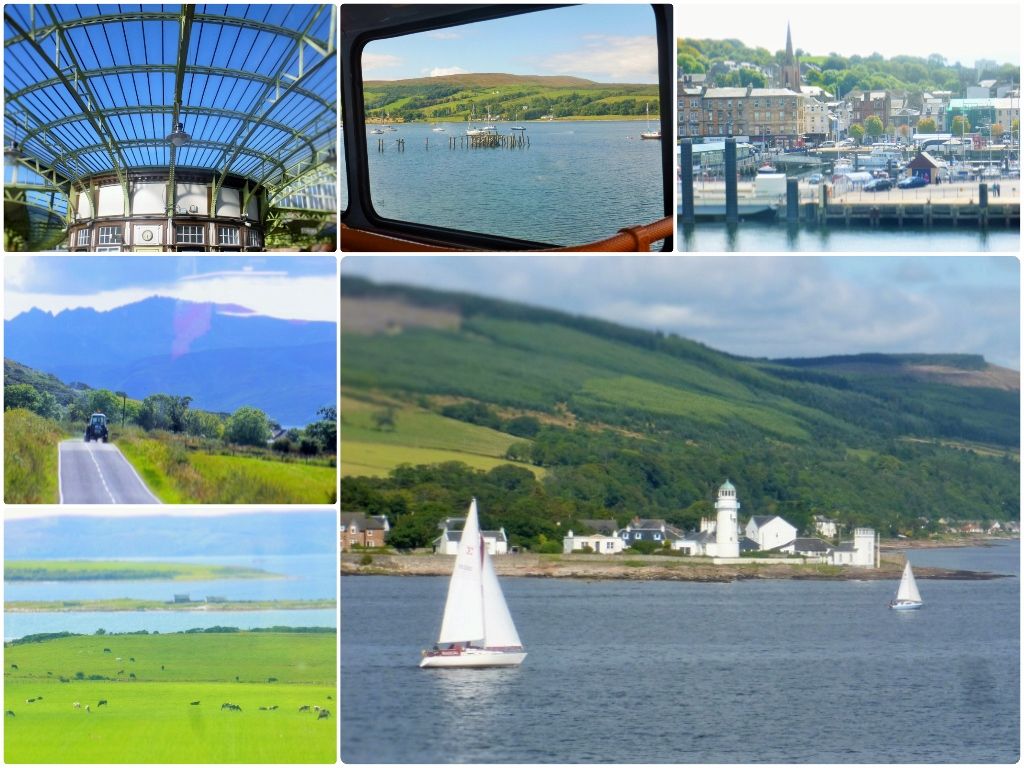 The end-to-end journey from Stirling to Rothesay on Bute takes just over three hours, so there’ll be time available on arrival to tour the island on an open-top bus.
Hence it’s very much best to only travel to Bute when the weather is behaving itself.

3. Having tea on a steam train:

The beautiful Strathspey Railway is one of Britain’s most delightfully preserved steam railways, and it has easy access from Stirling as it shares the station in Aviemore with the mainline trains (although optimum connections aren’t available on Sundays).

It’s possible to leave Stirling at 09:15 and make the most of a full day exploring the Strathspey Railway (connecting at Perth for the stunning journey along the Highland Main Line on to Aviemore).
On arrival, you’ll then have the opportunity to make two return trips up and down the line, having the optional afternoon tea on your second journey of the day, with time to explore charming Boat Of Garten station between trains! 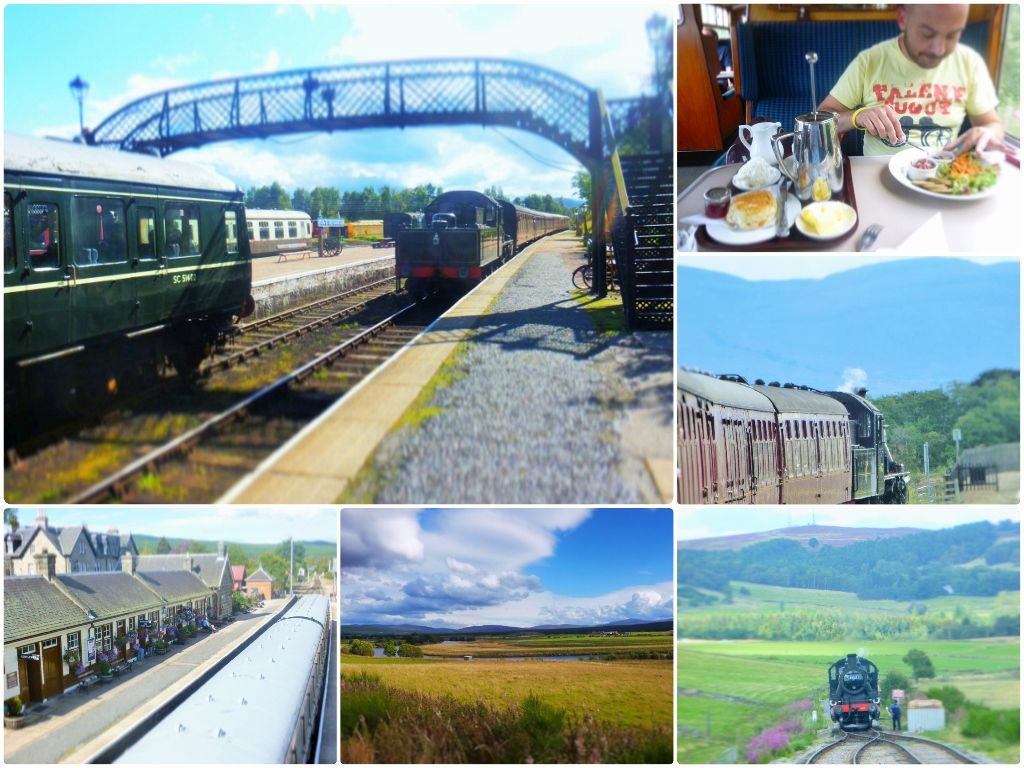 Or if you just want to have afternoon tea whilst making the one return journey on the line, you won’t have to set off from Stirling until after 11:00.

4: Along the East Coast

Two trains per hour link Stirling to Dundee and the charming journey between these two cities takes only an hour.
The wonderful V & A Museum, which celebrates the best of Scottish design, is just across the street from the station, but not being a dog-friendly location, we skipped it on this particular day.
Though if you will be sans pooch, you’ll have time to see its collections on this day of travels.

A one station hop on from Dundee, including the incredible journey over the Tay Bridge, conveyed us to Leuchars, where simple as can be connections are available into buses for the short ride on to St Andrews.
Patch was frolicking on the beach less than two hours after we had departed Stirling. 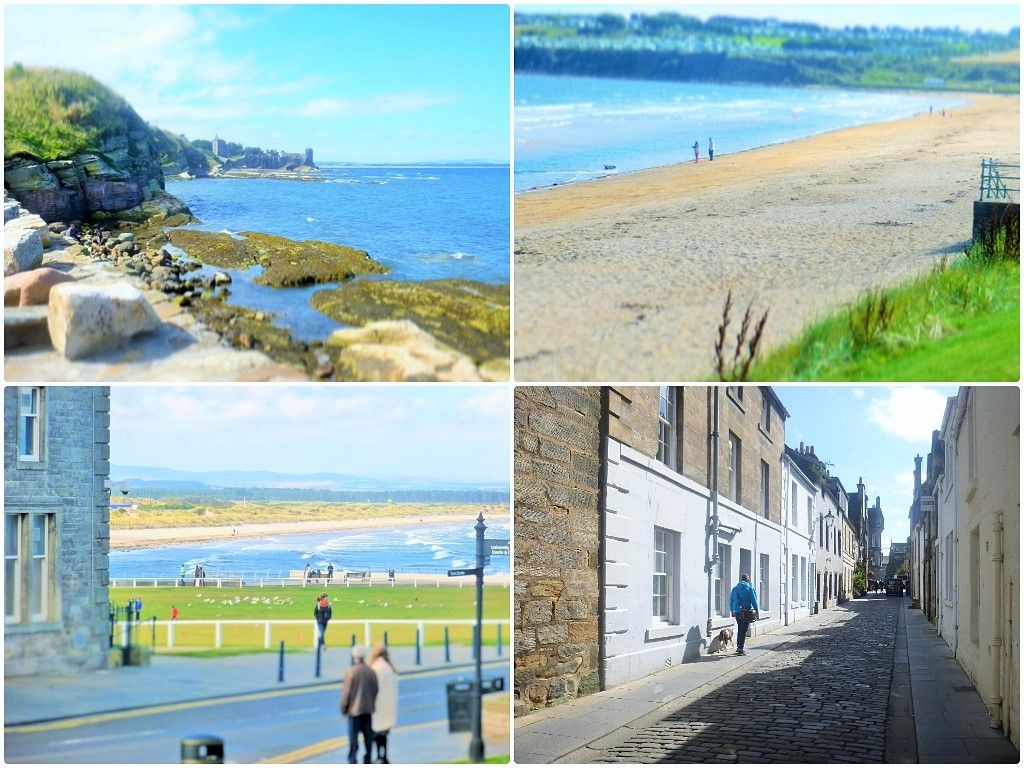 After lunch in delightful St Andrews and making our way back to Leuchars station we then hopped on a train for the spectacular coastal journey to Edinburgh; less than an hour away by train.
Then having spent the late afternoon and evening in the city we took one of the trains which depart twice per hour back to Stirling.

Seeing the Forth Bridge:

On that East Coast adventure the train to Edinburgh had taken us over the majestic Forth Bridge, but ShowMeTheJourney wasn't going to miss the opportunity to get closer to this iconic piece of railway engineering.

On another day by leaving a train from Stirling at Haymarket station, a simple connection was required for a two station hop to Dalmeny.
After exiting that station, we headed down the road towards South Queensferry village, but spotted a path on the right which led down through a wooded glade to the south bank of the Firth of Forth.
From there the majestic sight of The Forth Bridge was soaring above us. 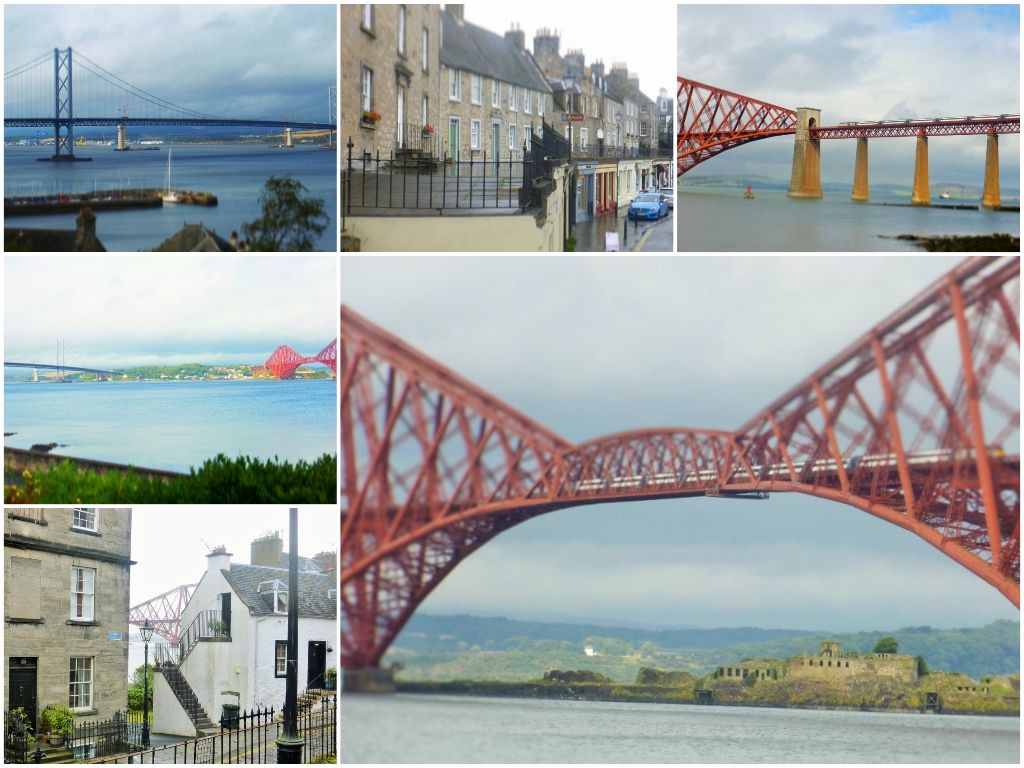 A five minute walk along the shore leads took us to the centre of charming South Queensferry, which is home to several pubs with views across the water, so you can watch the trains go by while enjoying a Scottish tipple or two.
It’s a steep walk from South Queensferry back up to Dalmeny station, but there are frequent local buses available.

With our four days of travel to Fort William, Bute, Aviemore and the East Coast, ShowMeTheJourney had assumed that a Spirit of Scotland pass would be a significant money saver.
But it's possible to travel fairly long distances in Scotland with Off Peak Day Return tickets, which don't cost much more than one-way tickets.
These were and are still available for the journeys between Stirling and both Rothesay on Bute and Dalmeny - and they could also be used for journeys from Stirling to Dundee, St Andrews and Edinburgh.

What tipped the cost balance, by only around £5, in favour of the Spirit Of Scotland pass was, that we made the long journey to Fort William AND hopped around the East Coast on four trains in one-day.
So before committing to a pass for 4 days of travel, it's worth taking the time to look up the journeys you will be taking from Stirling on the Scotrail website.