Discover how to explore stunning Cornwall by train; including trips to the beautiful towns of Falmouth, Looe, Padstow and St Ives

By Simon Harper
| about 1 year ago
UKInspireJourneysHoliday Ideas

Exploring England’s most south-western county, Cornwall, without a car, but with a dog, ultimately proved to be a wonderful holiday, despite being an idea which came close to being dismissed at the early planning stage.

Because in common with most of Britain’s extremities farthest from London, Cornwall suffered particularly harsh cuts when the UK railway network was pruned in the 1960s.

Meaning that only four branch lines to the Cornish coast remain in service today, but with a plan to take a five night break in lovely Penzance, there would be time enough to tick them off; and we wouldn't need to choose where to go, because the railway map had decided that for us.

So you can now use this guide to follow in ShowMeTheJourney's footsteps and explore this Outstanding Area Of Natural Beauty by train.

The decision making was also influenced by friends who regularly drive to Cornwall, who all individually said, “oh, you’ve got to have a car”, with a common justification being that roads provide the only access to virtually all of the charming Cornish coves and fishing villages that are magnets for visitors.

The friends then went on to say variations along a theme of, “you can spend an hour or more looking for a parking space and then settle on having to walk miles, plus it’s easy to get stuck in traffic and we always drive down to Cornwall overnight, because trying to get there during the day is a nightmare”.

Which didn’t exactly conjure up visions of a stress-free means of spending much needed relaxing time away, so it was going to be Cornwall by train, or not at all.

A fabulous journey there by train

What tipped the balance was the desire to take the train to Cornwall, because the journey there in itself was going to be so wonderful, that it didn’t matter that we wouldn’t see every corner of the county on arrival.

This knowledge that the journey would be fantastic didn’t arise from the current promotional efforts of GWR, the current operator of the trains from London to Cornwall.
Its TV and radio campaigns have been curiously non-specific regarding the destinations it can transport you to and how it will take you there.
Instead this desire to take the train to Cornwall arose from the enticements provided by the original Great Western Railway to its prospective travellers more than 80 years ago.

Spend as much time as ShowMeTheJourney does escaping modern life, by visiting Britain’s preserved steam railways and the GWR posters produced in the 1930s, selling the notion that going to Cornwall by train will send one into raptures, are impossible to avoid and equally as impossible to resist!
The railway line operated by the Great Western since 1859, the route of the legendary Cornish Riviera Express, still exists, and yes this mythical Riviera was dreamed up by the railway company, but it's still a fantastically romantic idea!

And the trains which head direct to Cornwall from Birmingham, Bristol, Leeds and from as far north as Scotland, also have to travel along the same beautiful railway once they have passed Taunton. 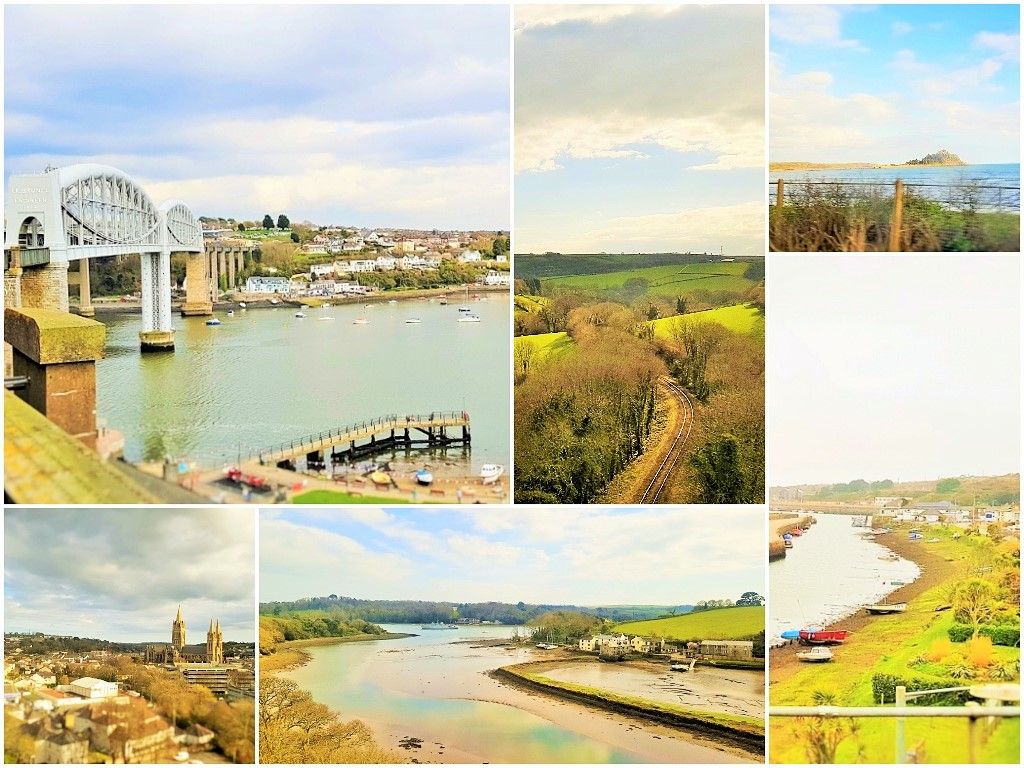 Though many of the most spectacular moments of the train journey to England’s south-western tip occur as the train passes through Devon.
The expectation is that that the glorious passage of the railway line right by the Devonian shore between Exeter and Newton Abbot will be a prelude of sea views to come.
However, once the train has reached Cornwall, the Cornish Main Line manages to avoid going anywhere near the coast for most of its length.

Though despite offering only occasional glimpses of the sea, this can't help being a journey which showcases the county's beauty.

The ​​​​​​highlights shown in the image above are - from top left:

Penzance was selected as the holiday location partially because of its fulfilment of a romantic notion that it would be nice to travel to the end of the line.
There are also direct trains to Penzance operated by CrossCountry which live up to their name by taking a route from Edinburgh, which calls at other cities including Newcastle, York, Leeds, Sheffield and Birmingham.

Though a big tick in the box was that the charming Hotel Penzance offered dog-friendly accommodation within a 10 min walk of a station.
Particularly as tracking down the combination of both good for the dog and ideal for us, plus an easy distance to the station, can be an epic task.
Though a word of warning for those with compromised mobility, is that the road up to the hotel, is short, but exceptionally steep.

As for where to go from Penzance, the railway map decided this for us, there would be day trips to Falmouth, Looe and St. Ives, three of the four towns accessed by the branch lines off of the mainline.
A plan which paid dividends as the journeys along the branch lines proved to be as delightful as the destinations.

Another reason for choosing Penzance as the base location for the exploration of Cornwall was its proximity to St Ives.
As it's only a 35 minute journey from Penzance to St Ives with a simple as be connection at St Erth station, we booked tickets at the station just before boarding.

Visiting this seaside gem was at the top of the must-do list and it didn’t disappoint, but what proved to be a wonderful surprise was the journey along the St Ives Bay Line.
In ShowMeTheJourney’s humble opinion a coastal train ride is made more memorable if the railway is located back from the shore, so that more than the sea can be seen from the train window.

By this criteria the views of the bays, beaches and headlands on the short, but very sweet journey from St Erth, make this ride my top of the charts pick for a British coastal train journey; a glorious 10 minutes that by itself pretty much justifies the efforts in reaching Cornwall.
Though the beautiful day showcased the vistas at their best, take a seat on the right-hand side when boarding in St Erth, a one station hop from Penzance.

Taking advantage of the weather, a spontaneous and rather smart decision was taken to make the most of the sea views, by walking the footpath by the railway, back to Carbis Bay station.

We then boarded the train there back to Penzance with the connection at St Erth.

Looe is some distance from Penzance, but depart by the 10:50 train after a leisurely breakfast and you’ll be arriving at this seaside town's utterly delightful station just after 13:00.

And because of the length of this journey a Cornwall Ranger ticket, which can be purchased just before boarding at the Penzance station ticket office, was a money saver

There will be a simple connection between trains to negotiate at Liskeard, with some contingency time available should the train from Penzance be delayed.

The lovely Looe Valley Line from the junction is operated as a community partnership railway, where local volunteers support the running of the trains.

Evidently a sensible decision has been taken to give the stations at each end of the line a nostalgic aura, they resemble those found on heritage railway, but despite a grey day, the entire experience worked its magic.

To be honest Falmouth was added to the itinerary because it has retained its station and as it can be reached by train in under 90 minutes by train from Penzance, we thought ‘why not?’
And Off Peak return tickets weren't any more expensive when purchased last minute at the station.

ShowMeTheJourney has never seen the branch line to Falmouth from Truro, now known as the Maritime Line, on a list of scenic railway journeys, but the sweeping views down to the coast are rather fabulous.

And Falmouth proved to be utterly beguiling on a sunny day, its charming main shopping street and lovely beach ticked the boxes.
And for those travelling without a pooch, the town is also something of a magnet for art lovers with its charming gallery.

A planned day trip that didn’t happen because the weather intervened, hence the lack of images, was a trip to Padstow.

The ambitious, but feasible plan, was to travel there by initially taking the train from Penzance to Bodmin Parkway station, in order to connect for a journey by steam train on the Bodmin and Wenford Railway.
Bus route/line 11A links provides the final stage of the journey as it links central Bodmin to Padstow.
This bus line also calls at Bodmin Parkway station, so when heading to Padstow you could skip the journey on the steam train - and on the return trip you can take the bus direct to Bodmin Parkway from Padstow.

But now this adventure can be saved for the inevitable return to Cornwall by train.
Particularly as a Ride Cornwall ticket includes all the journeys on this day trip, except for the steam train.

And buses still go to places never served by trains

Despite not having a car, we also didn’t miss out on visiting some charming fishing villages, as both Mousehole and Porthleven are within a 45 min ride from Penzance on buses which depart at least hourly.