Includes insights to buying tickets and how to use the departure information to find your train.

By Simon Harper
| 8 months ago
HelpFranceStations

Our guide to taking a train from major French train stations aims to remove much of the confusion you may experience when making your way to your train, or buying tickets at the station.
The stations used by express trains in France are often beautifully preserved examples of 19th century and early 20th century architecture, but some of them have yet to be fully modernised to meet the needs of 21st century travellers. 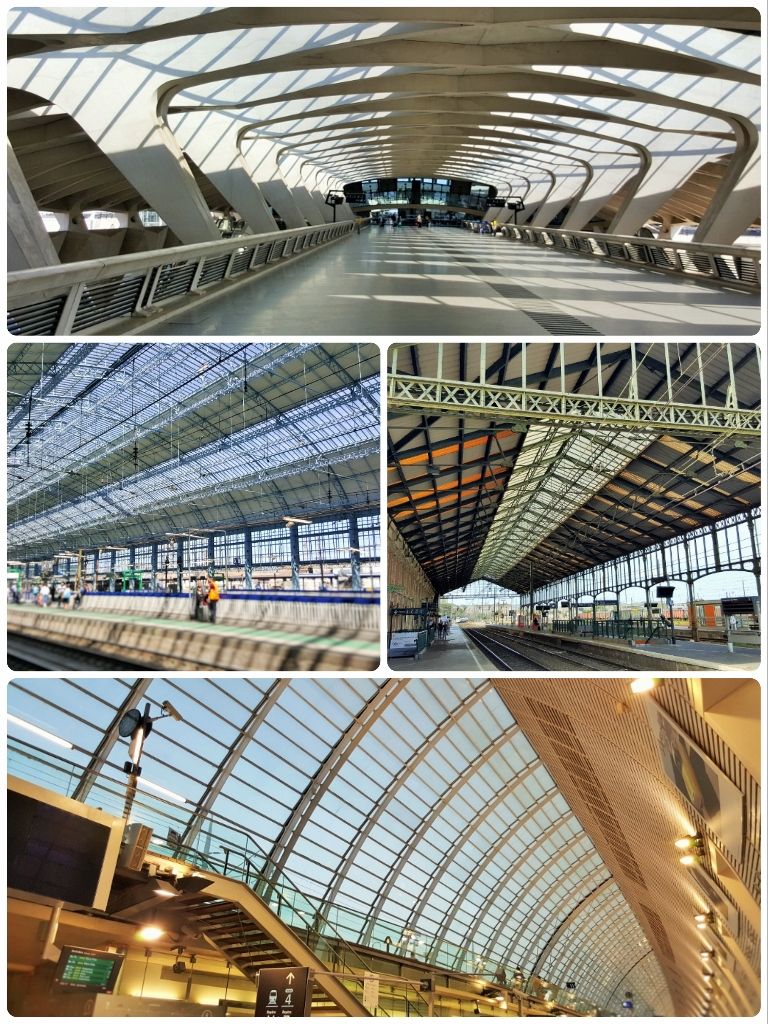 7 Things Worth Knowing about major stations in France:

(1) The number or letter of the specific voie (platform/track) that a train will be departing from, many confirmed until 20 minutes before the departure time; it may only be confirmed only 5 minutes in advance.
But due to the crowding that this caused, French national rail operator SNCF, has reacted to the pandemic by taking steps to change this, the new aim is for departure details to be confirmed 30 mins before a train will be due to leave.

(2) The terms and conditions of French train tickets stipulate that you must be on the platform at least 2mins before the departure of your train.

(3) ALL tickets issued by the ticket machines or at ticket counters must be stamped in the yellow boxes prior to boarding a train.
There is no need to stamp any other type of ticket. 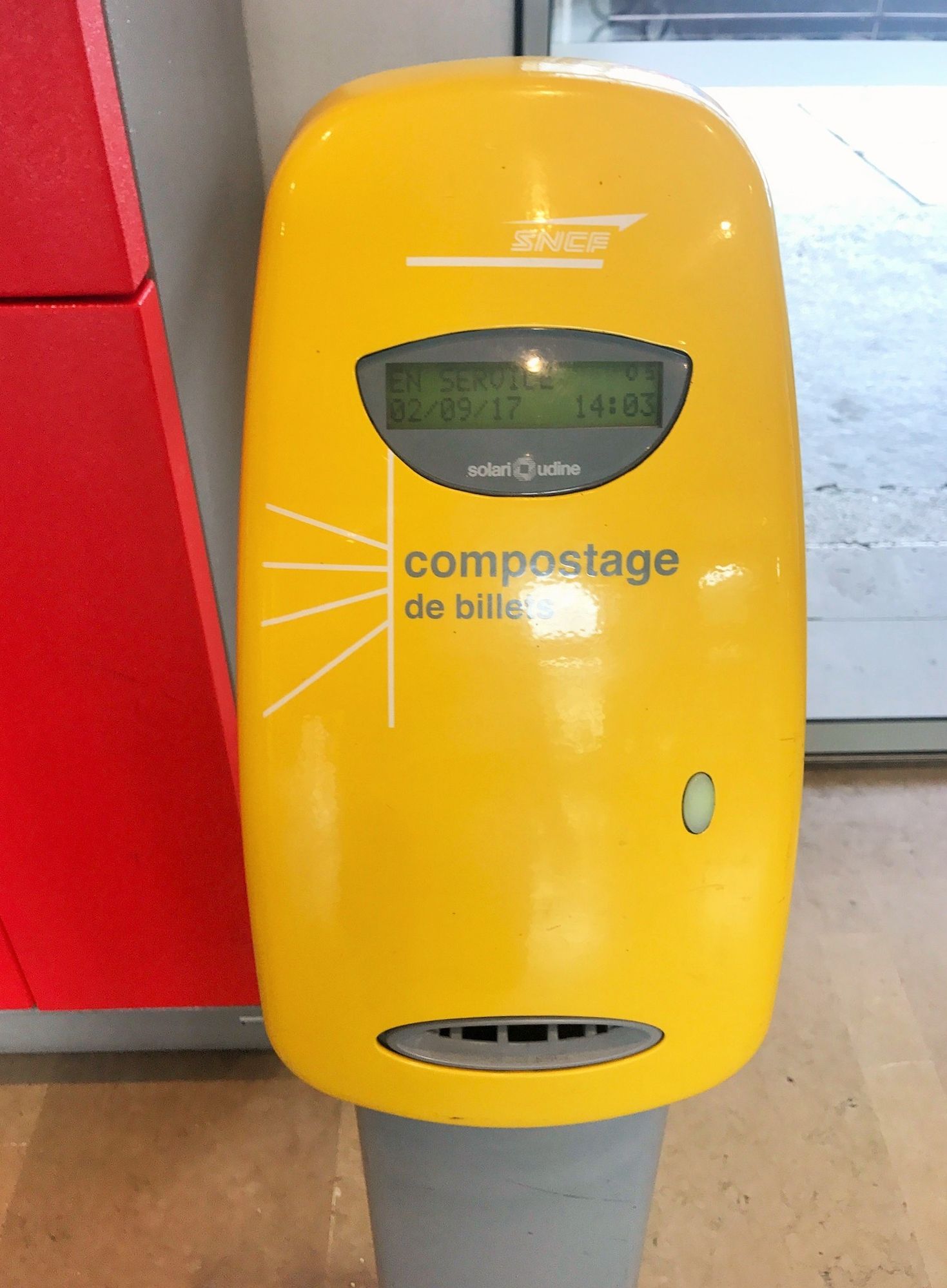 Normally these ticket stamping machines can be found at the entrance to a voie/track/platform.

(4) The voies (platforms/tracks) will be divided into repéres (zones) indicated by letters.

(5) At some stations, letters and not numbers are used to indicate the specific voie (platform/track); and when that is the case the repéres (zones) letters are larger, and generally more prominent, than the voie letter. 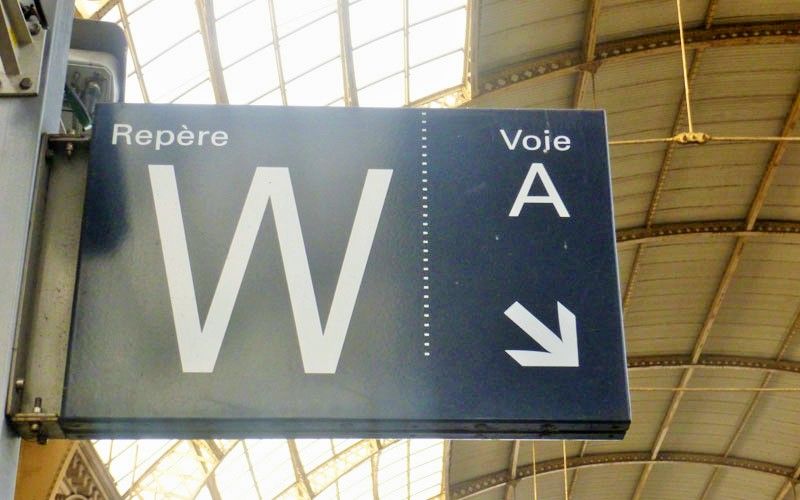 At some very busy stations including Bordeaux-St Jean, Dijon-Ville and Toulouse-Matabiau, only some of voies (platforms/tracks) have lift access; and when they do the lift usage is understandably restricted to travellers with limited mobility.
So when arriving and departing by trains you may no choice but to heave luggage etc up or down flights of stairs, because escalator access to the voies (platforms/tracks) tends the exception rather than the norm.

(7) French stations rarely have cash machines/dispensers, so the best option is to try and find a bank near the station. Don't plan on being able to obtain cash on arrival at a station.

SNCF is rolling out new ticket machines across French stations, they’re worth trying before joining the queue at ticket/billetterie desks.
The two types of ticket machine are:
(1) these yellow machines 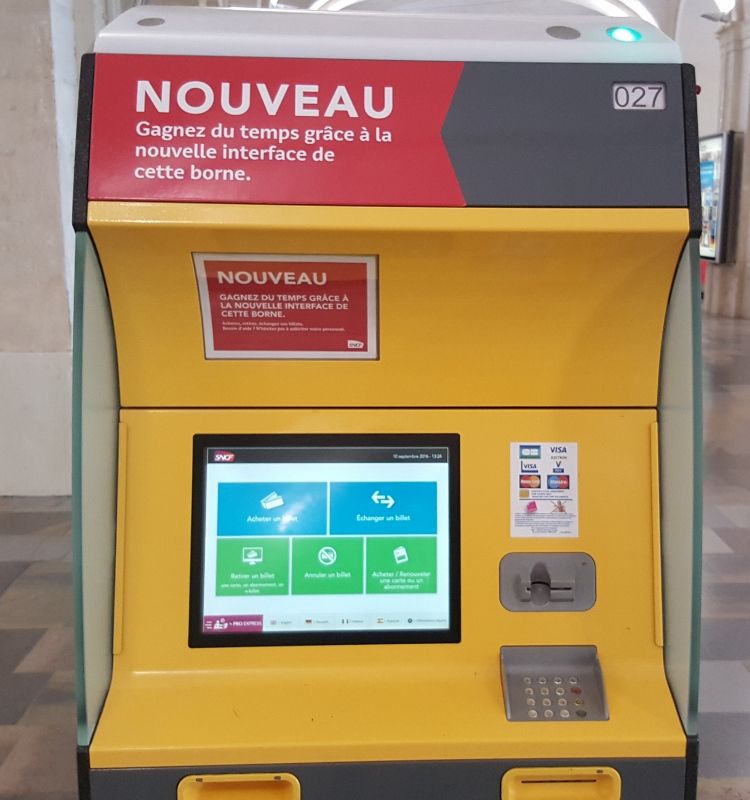 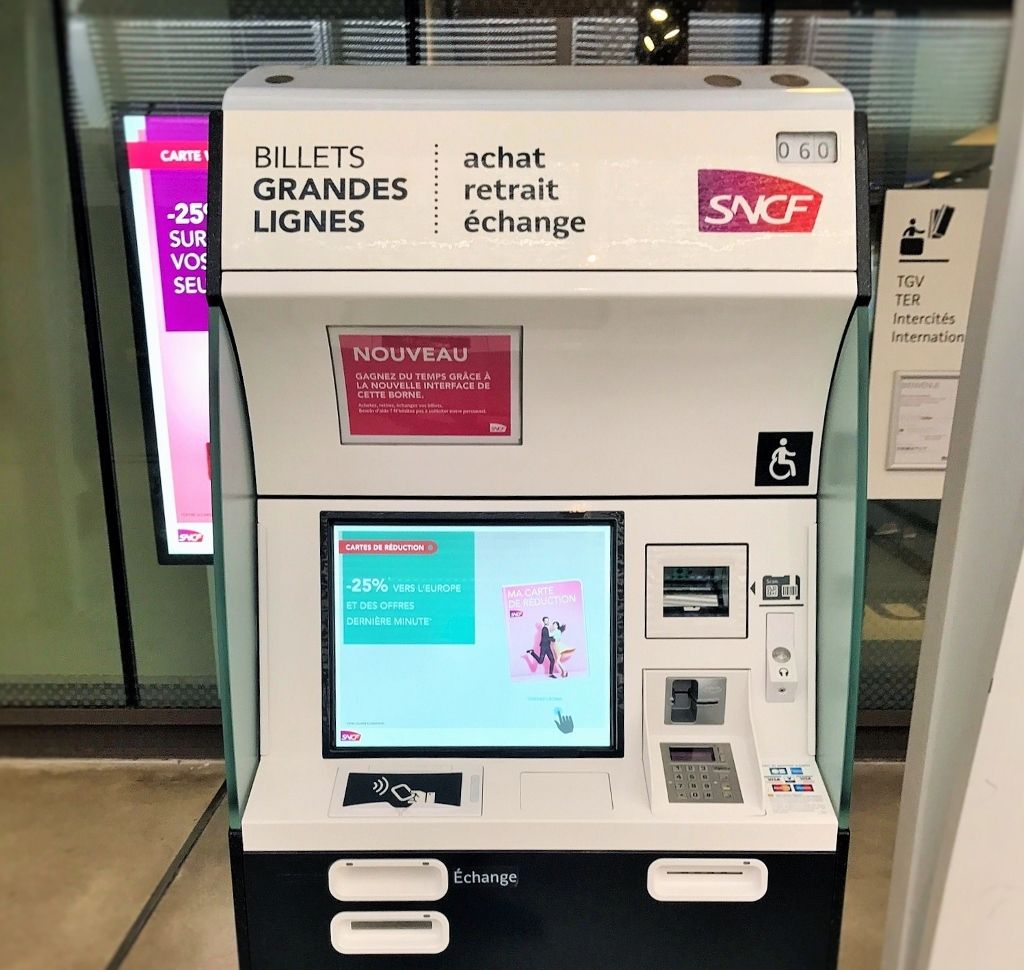 If when booking you opted to collect tickets at the station and will be picking up the tickets on your travel date, they can be collected from these machines as well as out the ticket counter; if you want to pick them up in advance of your travel date, you will need to go to ticket counter, using an Advance travel desk at stations which have them
You will need to enter the PNR number, you will have received and NOT the reference number. 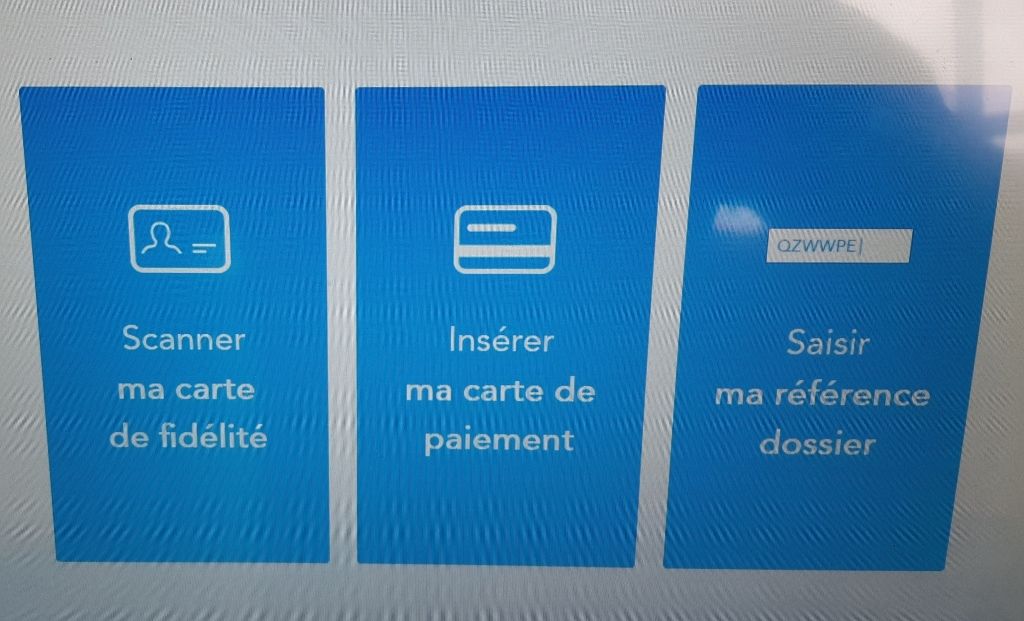 In our experience, inserting the card you used when making a booking doesn't seem to work if you booked outside France or not with OUI SNCF / SNCF Connect, so enter the PNR NUMBER you have received into the box above 'Saisir ma référence dossier'.

If you have any problems go to the staffed ticket counter

Three other things also worth knowing about booking tickets at a station:

(1) If Oui.SNCF hasn't included a PNR code(s) on its confirmation email, you won't be able to use a machine for ticket collection.
(2) At a few large stations the ticket office (Billetterie) will be separated into two offices, one for tickets for that day’s travel and one for advance tickets/reservations.
(3) The Accueil (information) desks don’t sell tickets, but the staff can point you in the right direction, the staff will likely speak English at the larger stations and in the main tourist areas

At major stations in France there are UP to FIVE types of departure information screens: 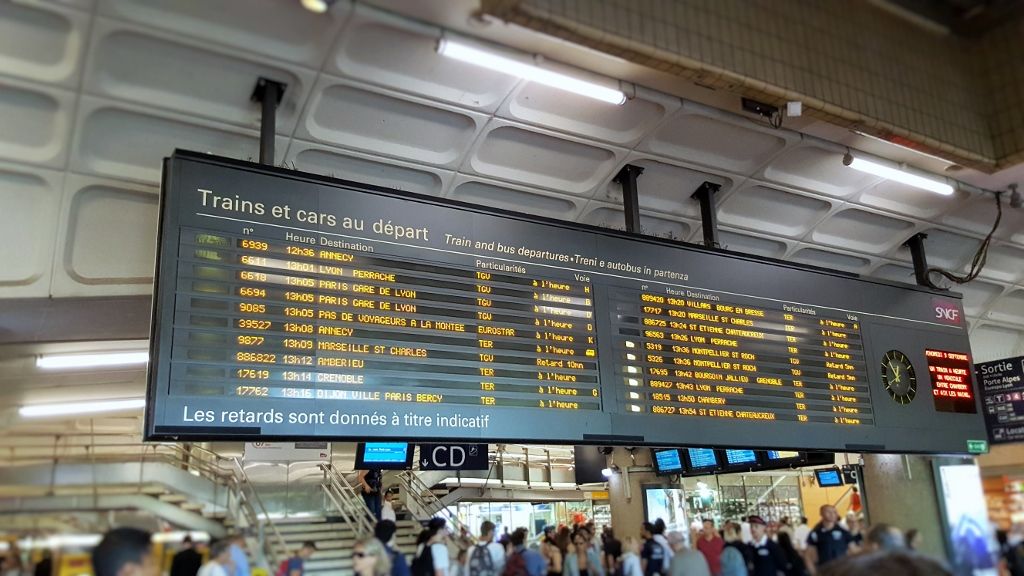 (2) TV style screens that are scattered around the station. 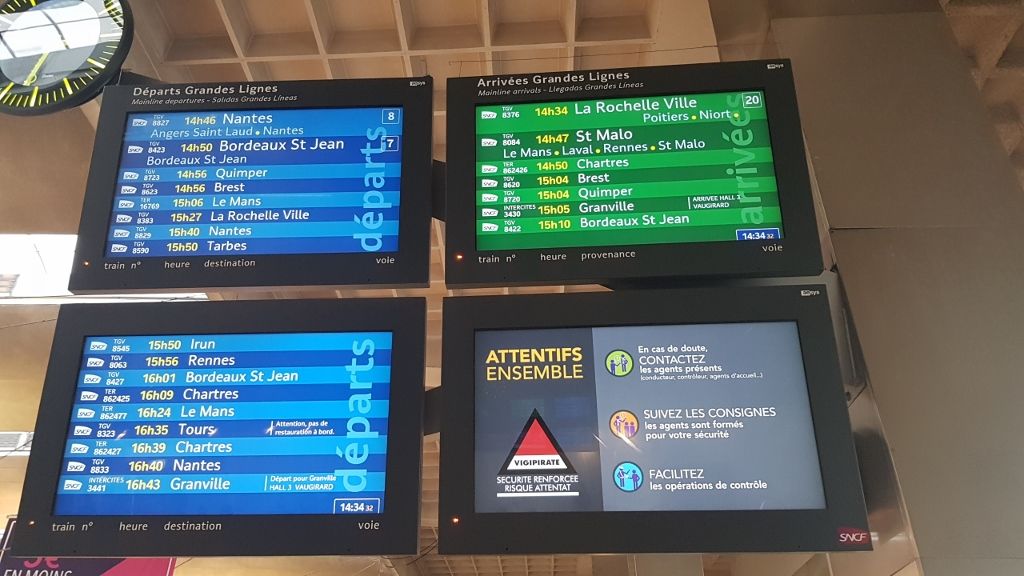 At the main Paris stations, the long distance (TGV and IC) trains are shown on a separate screen (s) marked ‘Grande Lignes’.
So if you’re not looking at a ‘Grande Lignes’ screen, you won’t see your train listed if you are taking an IC or TGV train.
At some stations, these TV screens indicate in which departure hall at a station you should wait in, prior to the confirmation of the specific voie (platform/track) that your train will be departing from.
These TV style screens will also show all of the calling points for the next two departures, but only the departure time, train number and final destination is shown for all subsequent departures.

(3) The specific TV screens on each voie (platform/track) which give details of the next departure from that particular voie, including all the stations that a train will be calling at. 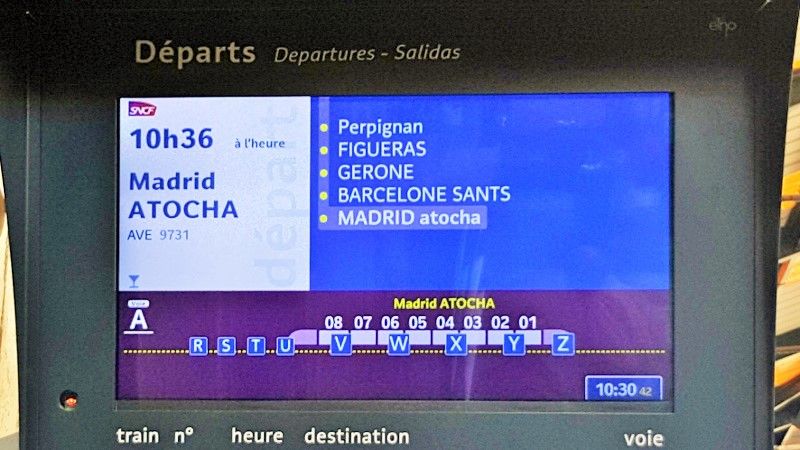 If you will be taking a TGV train, or an IC train, which has compulsory reservation, this screen will also show you in which zone/repére each coach of a train will be located.
On the image above the train will be occupying zones/répéres V to Y, coach numbers 1 and 2 will be located in zone/répére Y etc.

(4) You may also see rectangular black ‘composition de train’ indicators, that also show in which zone/repére each coach will be located. 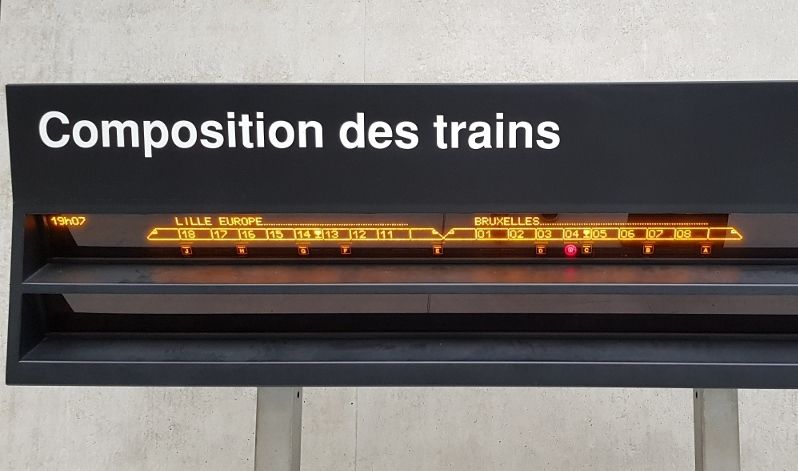 The red light beneath the train indicates the location of the specific indicator you're looking at - in other words, your location on the voie (platform/track).

French stations generally don’t tend to have paper departure sheets, you have to rely on the electronic departure information screens.
If you want to check the details of a later departure, then small paper timetable booklets are USUALLY available for each train route and these can be found in ticket offices.
Or make enquiries at the information (Accueil) desks.

Making your way to the train:

If you will be travelling by TGV, or an Intercités train with compulsory reservations, the usual FOUR steps to take are:

(2) At major stations, the main (black) electronic information displays on station concourses and in departure halls, will generally only indicate the terminus station and this train number; and not the other stations that the train will be calling at.
If you can’t see the station you're heading to on these screens, match the train number and departure time on your ticket(s) to the corresponding information on the departure screens.

(3) When the number OR letter of the specific voie (platform/track) that your train will be departing from is displayed make your way to it; keep an eye on the screens, usually the departures details aren't announced - and if they are, it will be only be made in French.
If you collected your ticket from a machine or booking office, don’t forget to stamp your ticket in one of the yellow validation machines.

If you will be boarding a TGV at a terminal station, be aware that some TGV departures can be up to 20 coaches long, so allow time to walk along the voie (platform/track) to find the coach/voiture, in which your reserved seat is located.
Two TGV trains will often be joined together, so if you don’t have time to locate your specific coach/voiture, you at least need to be sure that you will be boarding the correct part of the train.

(4) If you will NOT be boarding a train at a terminus station and have a seat specific ticket/reservation, check the ‘voiture’ (coach) number on your ticket and use the zone information on the voie (platform/track).
Information on the voie (platform/track), which your train will be departing from, will show you where to wait for easy access to the coach ‘voiture’ in which your seat is located.

This zone/repére information is only available on the voie/platform, you can't access this information in a departure hall or on a station concourse.

Buying and using French rail tickets Travelling on French trains Taking trains to and from Paris Using rail passes in France
The general guide to French rail travel Discover what's good to know about riding the trains, using the major stations, booking tickets and travelling with Eurail and InterRail passes

The other rail station guides: