The most fantastic European stations in which to begin or conclude a magical journey by train!

ShowMeTheJourney believes that railway stations can enhance the pleasures of train travel, when the trains and the views from them are uninteresting, a station can be the most special aspect of taking a journey.

I'm not an architectural expert, but that isn’t the point of this list.
These are the stations where I suggest pausing to take in your surroundings and not only of the station itself, but also what lies outside their walls.
As will be seen it’s the location that gives some of these stations their wow factor.

So to the list – which is presented in alphabetical order because everyone will have a different favourite. 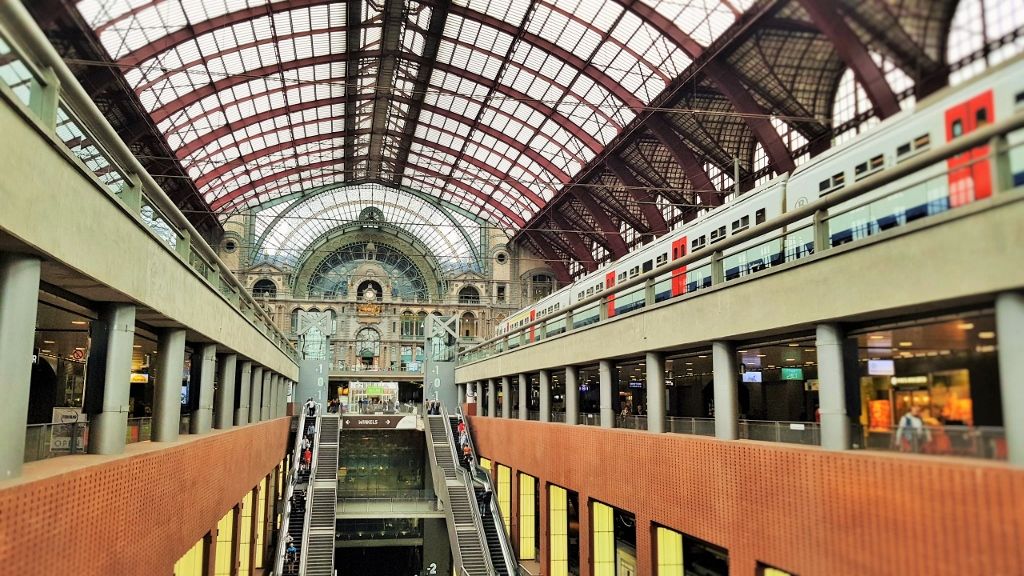 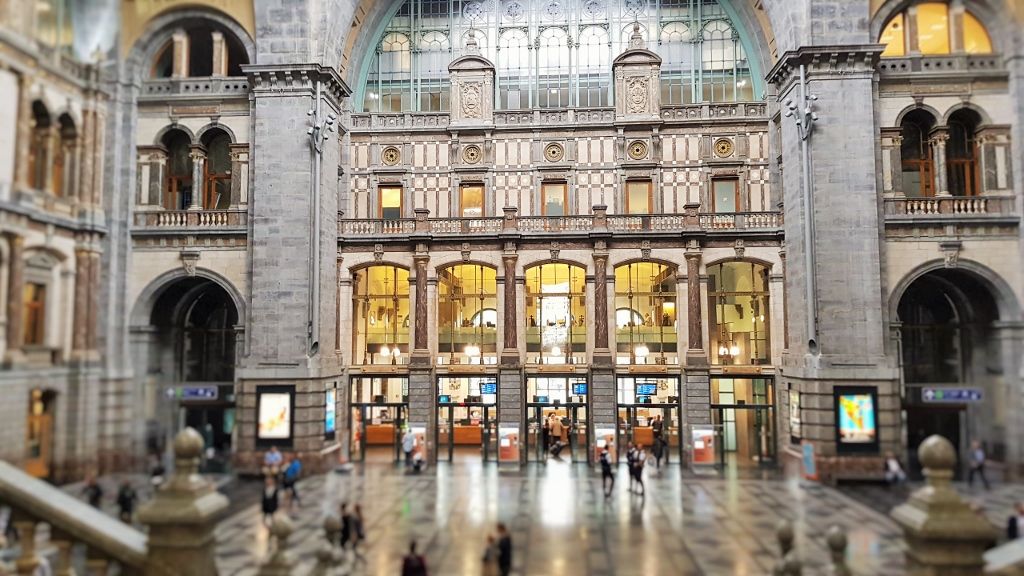 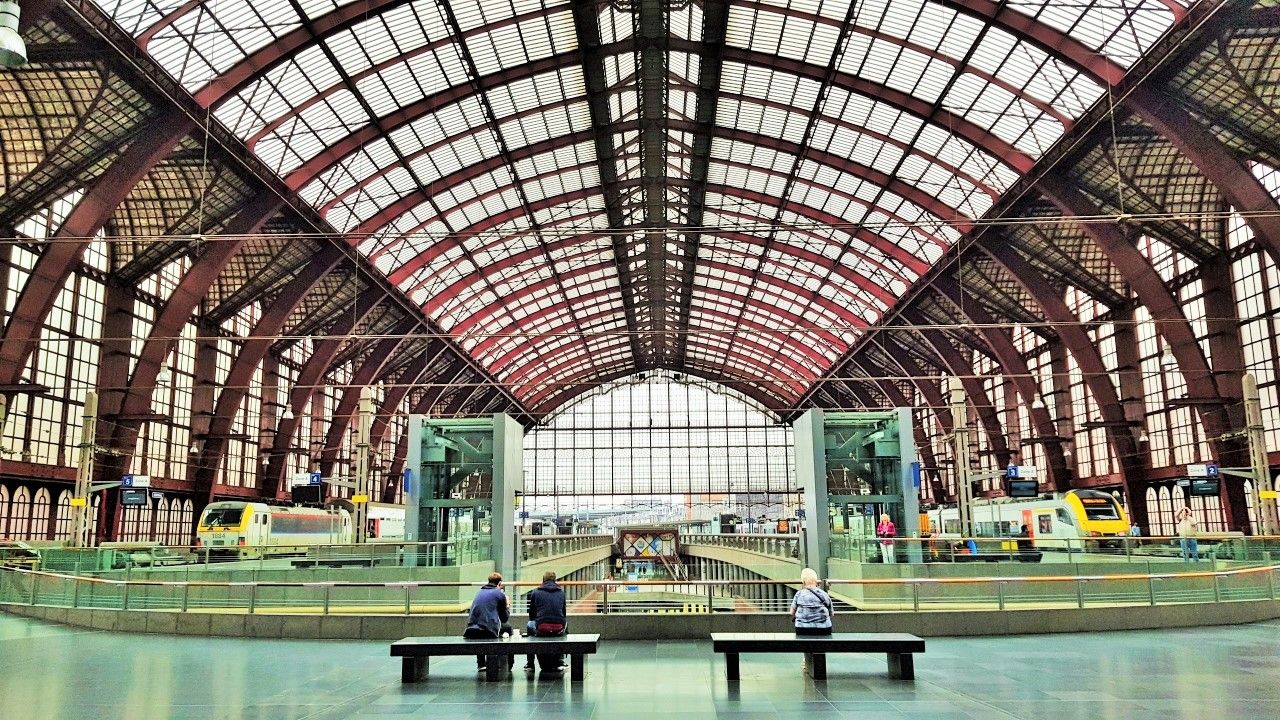 Spend more than two minutes on ShowMeTheJourney and you’ll soon realise that I’ve taken a lot of pictures of stations – the point being that the more fabulous a station is, the more likely it is that people will be inspired to take a train.

Normally I'm the the only person engaging in this activity, but Antwerpen-Centraal was an exception to this rule.
Probably due to it being the most wonderful building in Antwerpen/Antwerp, heck it’s a contender for the most fantastic building in Belgium.

When the high speed line used by the Thalys trains between Paris and Amsterdam was constructed through Antwerpen, its engineers faced a dilemma, demolishing the main station building designed by Lois Delacenserie was not an option, it is widely acknowledged as a masterpiece of early 20th century station architecture.
Retaining the layout of the original station, which was a terminus, wasn't an option either.
The additional time required for the Thalys trains to then reverse direction at Antwerpen-Centraal, would have negated much of the benefits of providing a high speed service.

Hence the solution was to place the high speed line underground, but then to also completely re-configure the platforms/tracks in the station, so that the space above the new part of the station could be opened up, with light flooding down from the elegant glass roof - which was to be retained in all its glory.

As a result one of the most impressive sight lines in any station are now the views up from the Thalys platforms/tracks, to Lois Delacenserie's buildings three levels above.

Once you have made the ascent and step into the main hall, the sight which greets you is breath-taking, a fantastic introduction to a beautiful city that can be easily explored from Antwerpen-Centraal. 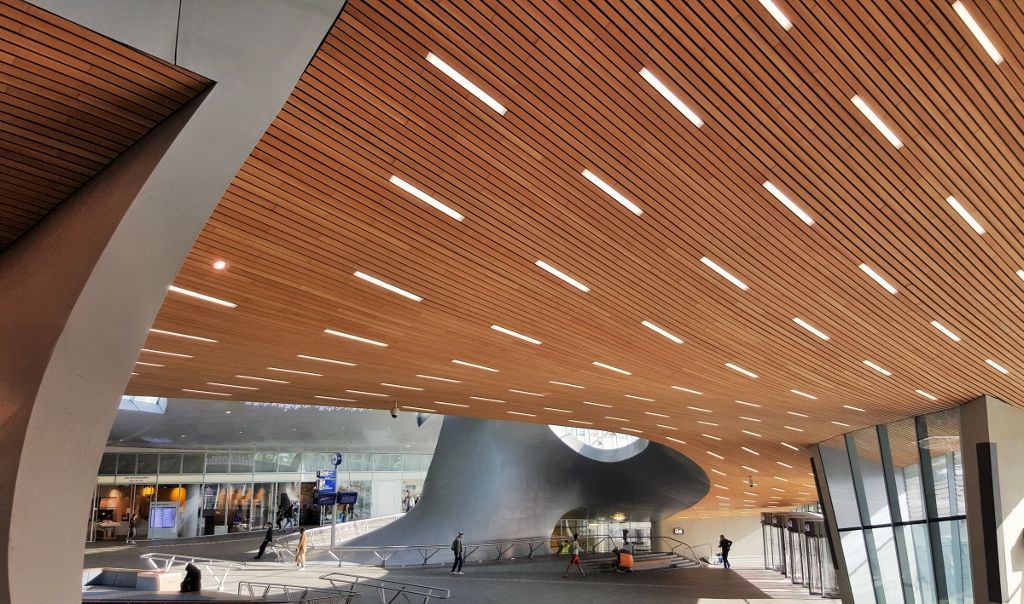 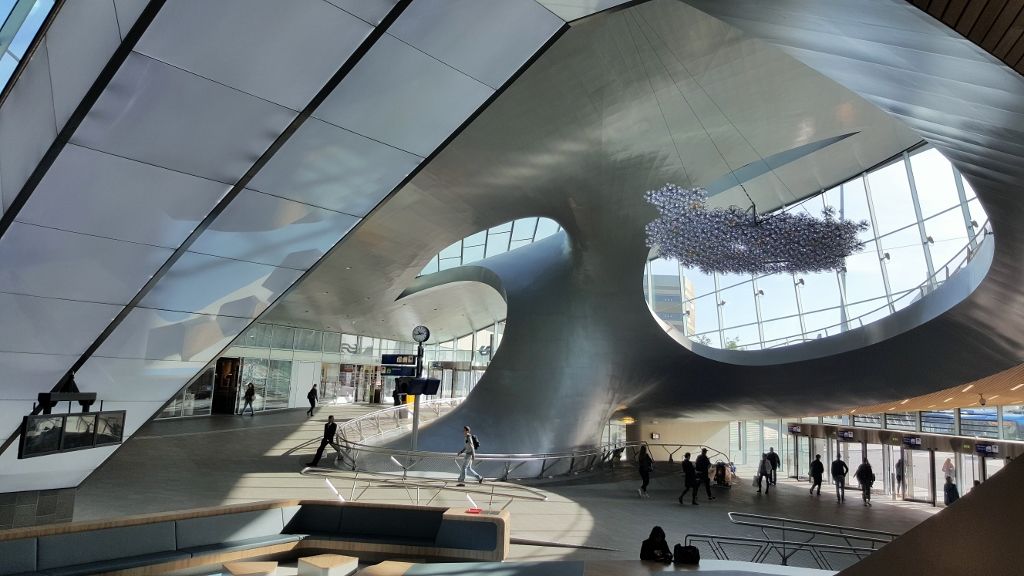 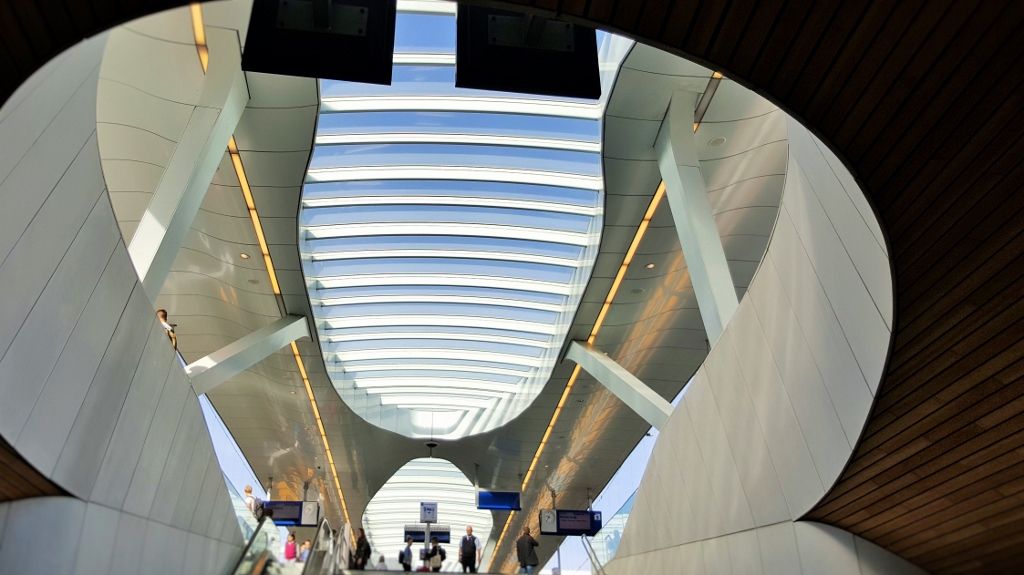 Adding an information page for Armhem-Centraal station is still on the to-do list, but it had to be included on this article.
Despite its many charms Arnhem was perhaps being overlooked on Where To Go in The Netherlands lists, but I suspect it's new station may have changed that, as it's one of the most Instagramable buildings I have ever had the pleasure of entering.

A 10 year re-construction project was crowned with the award of one of The Netherlands' most prestigious architectural honours - the National Staalprijs.

If you will be using a rail pass to travel on the ICE trains between Amsterdam and Germany and have the remotest interest in the best in modern design, then I urge you to break your journey at Arnhem Centraal. 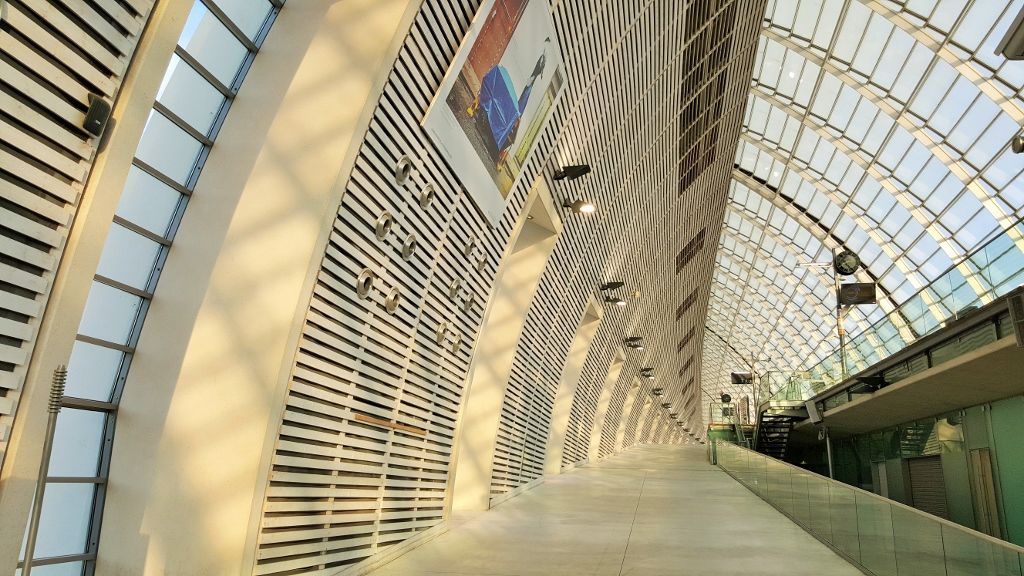 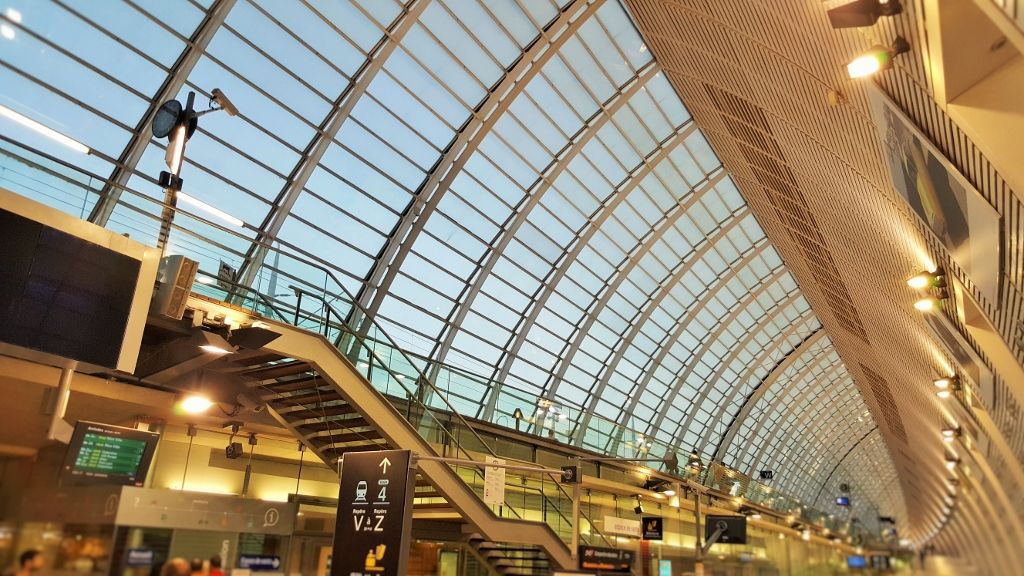 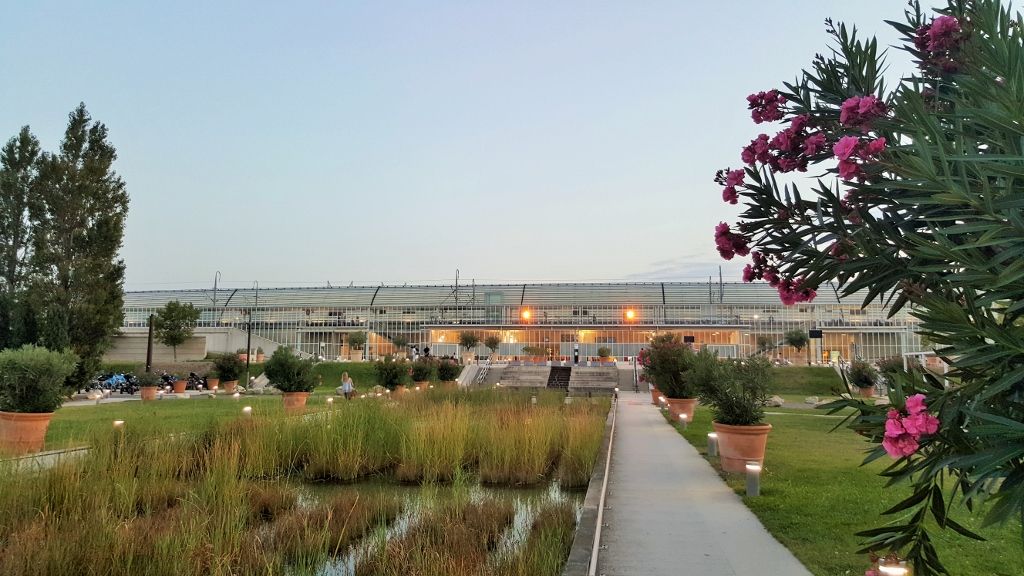 When the high speed lines (the LGVs) in France were planned and constructed they often had to by-pass towns, so that they could be as straight as possible.
So TGVs trains also have to divert off of the high speed lines to serve the bigger cities such as Lyon and Marseille, but this couldn't be justified in Avignon - though the older station on the edge of its U.N.E.S.C.O. recognised city centre, does have some direct TGVs from Paris.

Those smaller towns and cities have had to compromise with a solution that having a high speed station on the very edge of town, or off in the distance, is better than having no TGV station at all.
Most of these new stations for the TGV trains are very unremarkable, but SNCF obviously thought somewhere as fabulous as Avignon deserved something better, hence it was provided with arguably the best purpose built high speed train station in Europe.
Designed by SNCF's in-house architects Avignon TGV entices travellers with a promise that their efforts to reach the station will be amply rewarded.
It's also a text book example of how to make a station easy to use. 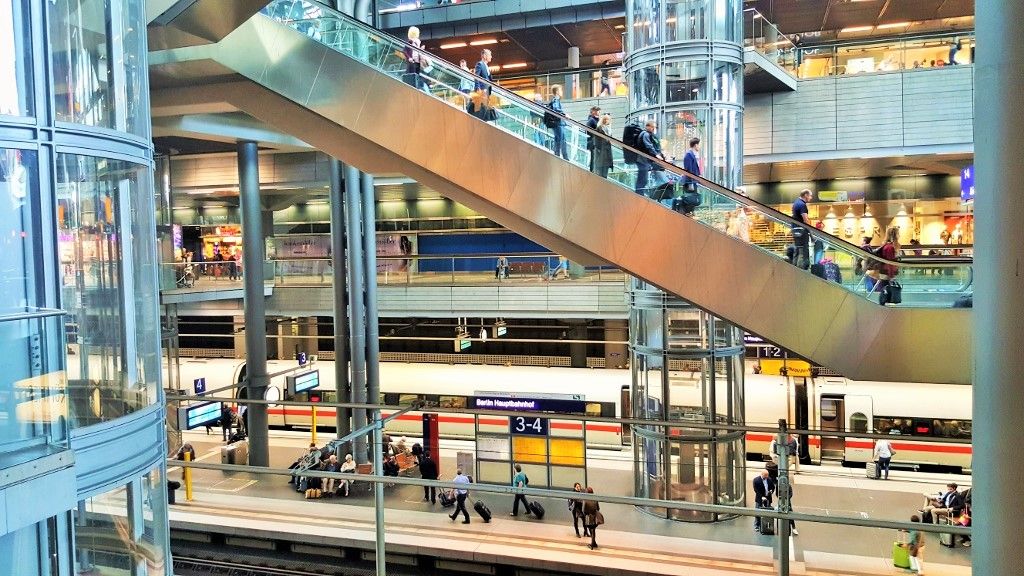 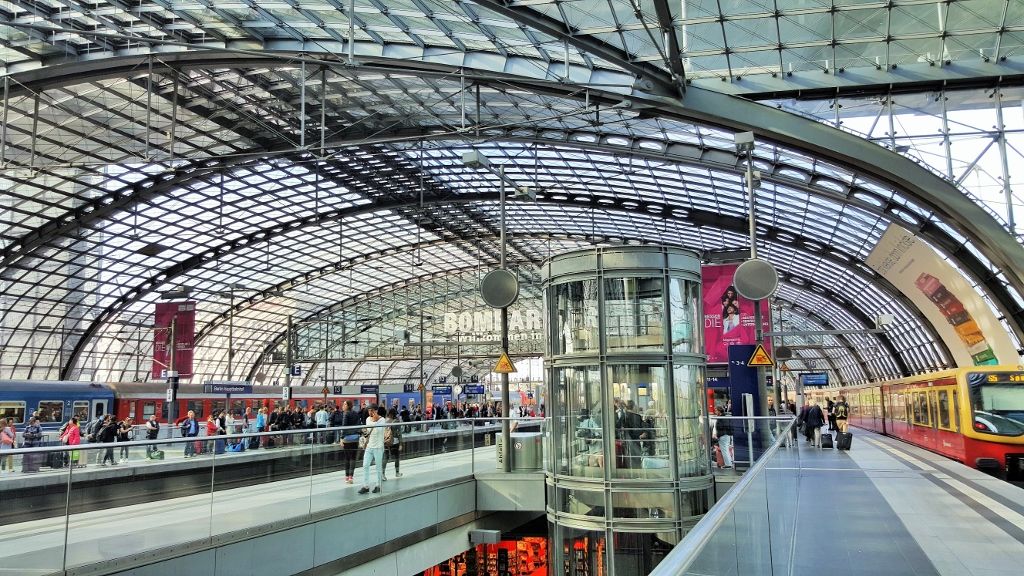 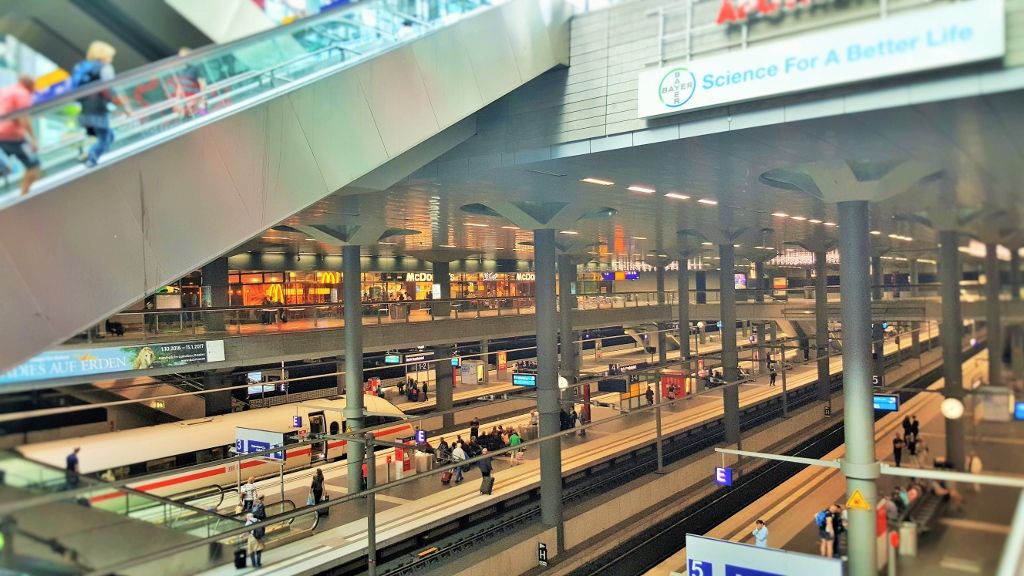 Post-reunification the German capital was in need of an architectural icon to symbolize east meeting west, but many trains also travel between north and south through the city.
Hence the solution of providing a cross-shaped station at Berlin Hbf - with east/west trains above ground and the north/south trains below.

But those below ground platforms couldn’t be dark and gloomy, so the solution was to dig an enormous hole in the ground and to flood it with light, in a construction project which lasted for 11 years!

Berlin Hbf is best appreciated when arriving by train at its lower level platforms, the sense of scale is awe-inspiring, but the station's ingenious design makes the ascent to street level and the platforms above, a relatively straight-forward process.
We also admire the manner in which at Berlin Hbf the trains take centre stage and aren't hidden from view, which is particularly worthwhile when they are as beautifully designed as the ICE trains.
Discover why the train is definitely the best means of arriving in and departing from Berlin 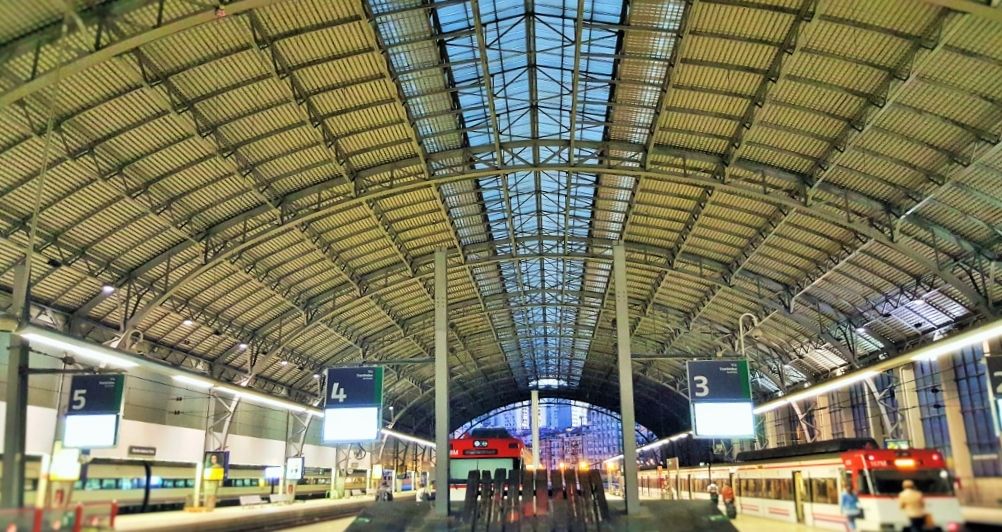 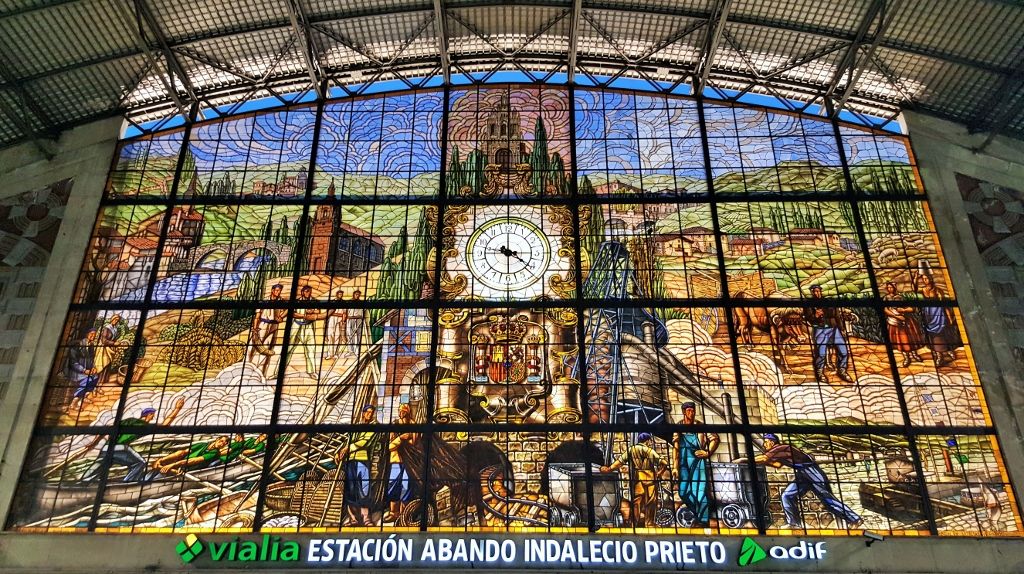 Being tired and emotional may have affected my judgement, as the sight which greeted me on arrival in Bilbao came at the climax of 15 hours of train travel that day; Barcelona → Valencia → Madrid → Bilbao.
Bilbao-Abando is an average sized 19th century railway terminus with small-scale grandeur, but it has an atypical feature, which earns it a place on the list.
Namely the stunning wall of stained glass, which divides the concourse from its main hall.

Though it was the surprise of its discovery when I arrived there, which helped give the station its sense of wonder, which I've now just ruined, so apologies for that. 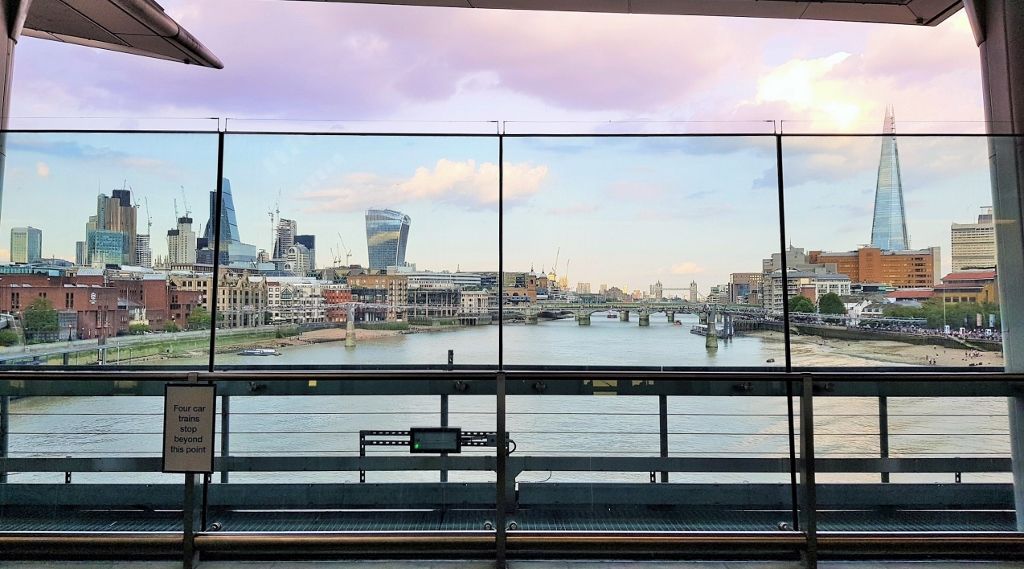 So I have cheated slightly and included what is mainly a commuter station , but to be honest I'm particularly pleased with the above photo, which also gives weight to the notion of a location justifying inclusion on an awe-inspiring station list.

And if I'd just arrived in London by plane at Luton or Gatwick Airport or by Eurostar at St Pancras and then wisely decided to make my way to the very centre of London by Thameslink train the vista above would be a splendid introduction to the city.

For Blackfriars station has been reconstructed, so that it spans the River Thames and it is this that gives the station its wow factor.
Some of the best river views in London can now be seen from its platforms, as can be seen when looking east, the vista encompasses St Pauls, Tate Modern, The Shard, Tower Bridge and the distant buildings of Canary Wharf.

And if you use the entrance on the north bank, don’t miss the wall of tiles at the station, which date back to when it was first constructed.
They showcase the near and (very) far romantic destinations across Europe, which users of the station were once connected to - and still are, if you take a train from here to the Eurostar terminal at St Pancras International. 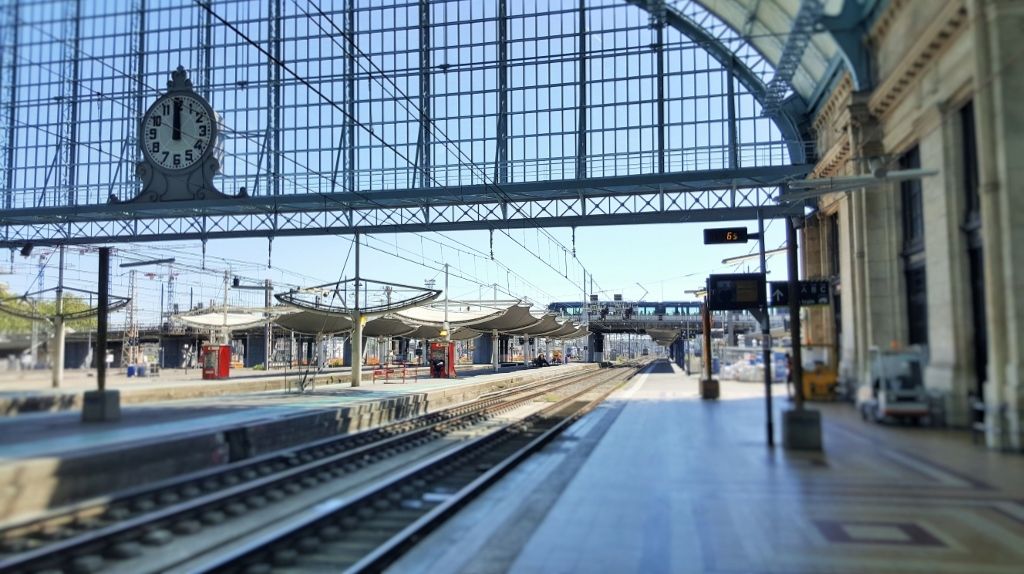 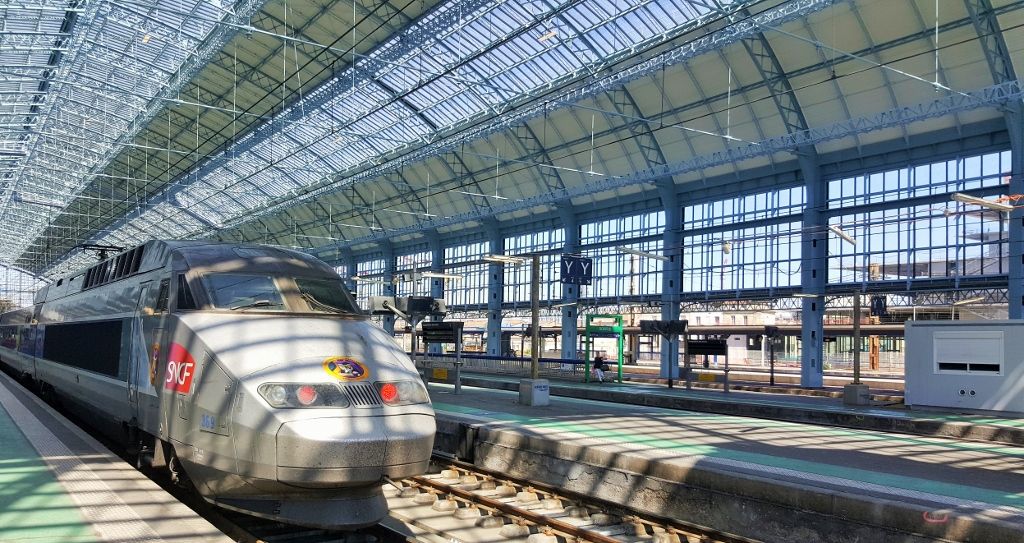 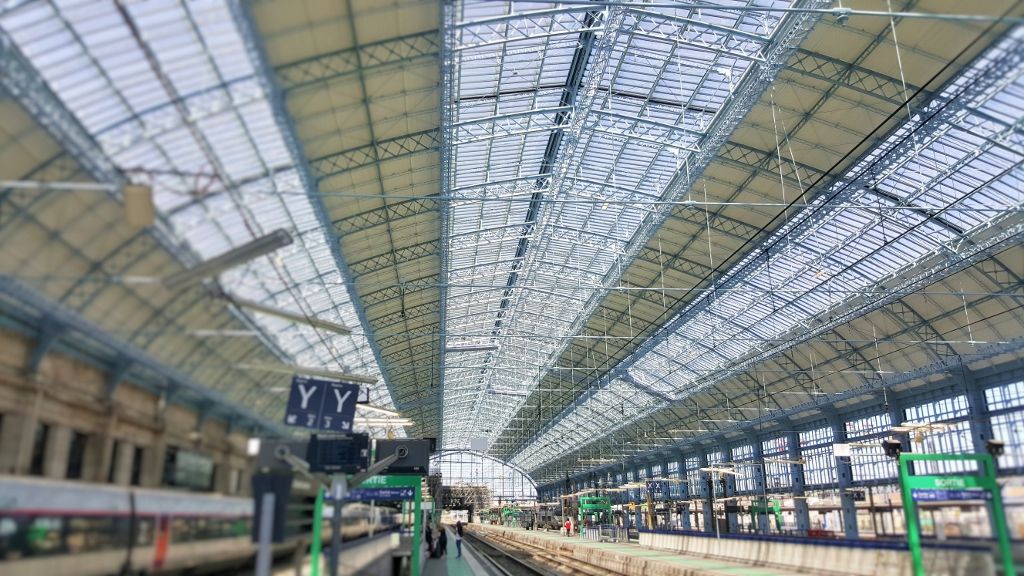 Those 19th century glass roofs, which transform stations into cathedral-like buildings dedicated to travel, give dozens of stations across Europe a sense of wonder.
The longest, and arguably most spectacular examples of one of these, can be seen in all its glory at Bordeaux St-Jean.

Designed by the legendary Gustave Eiffel, it now sparkles like new, thanks to the station restoration timed to coincide with the opening of the extended high speed line between Paris and Bordeaux.

So a beautiful beginning or conclusion to a train journey, but unfortunately the station now occupies a larger area than Eiffel's roof and some of the platforms/tracks/voie that lie outside it aren't particularly user-friendly.
If you will be taking a train to or from Bordeaux-Saint Jean our guide to the station is particularly useful. 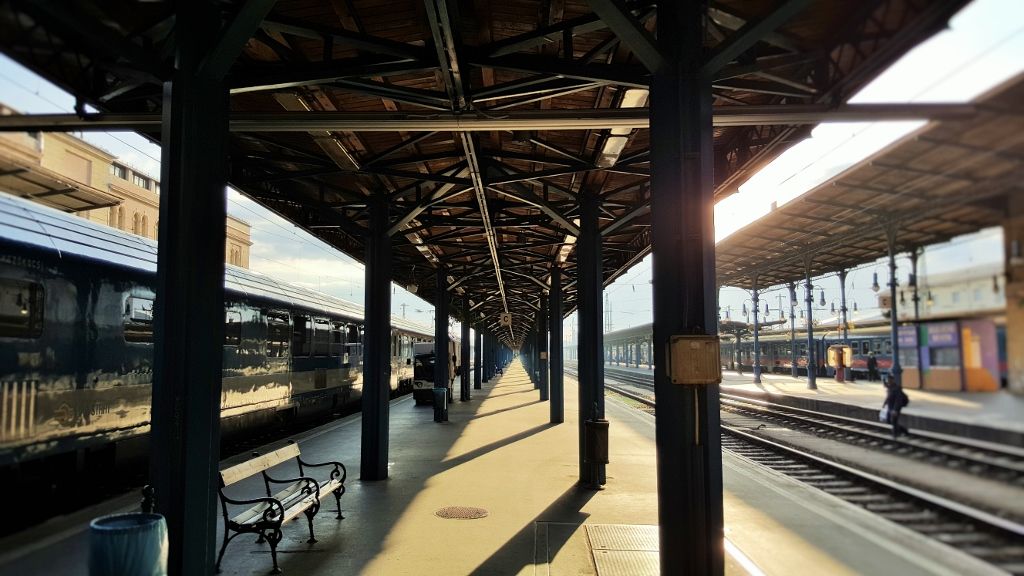 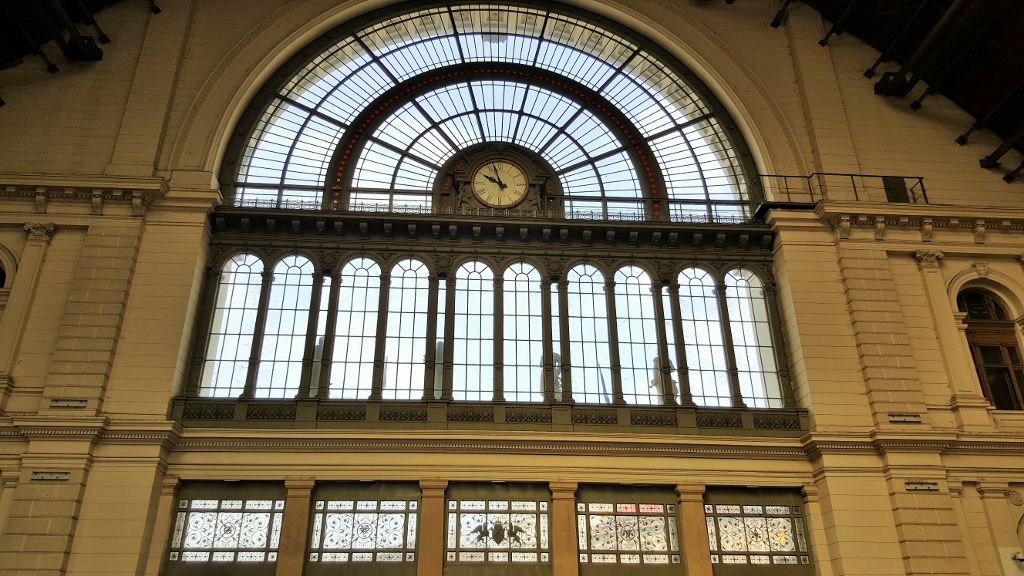 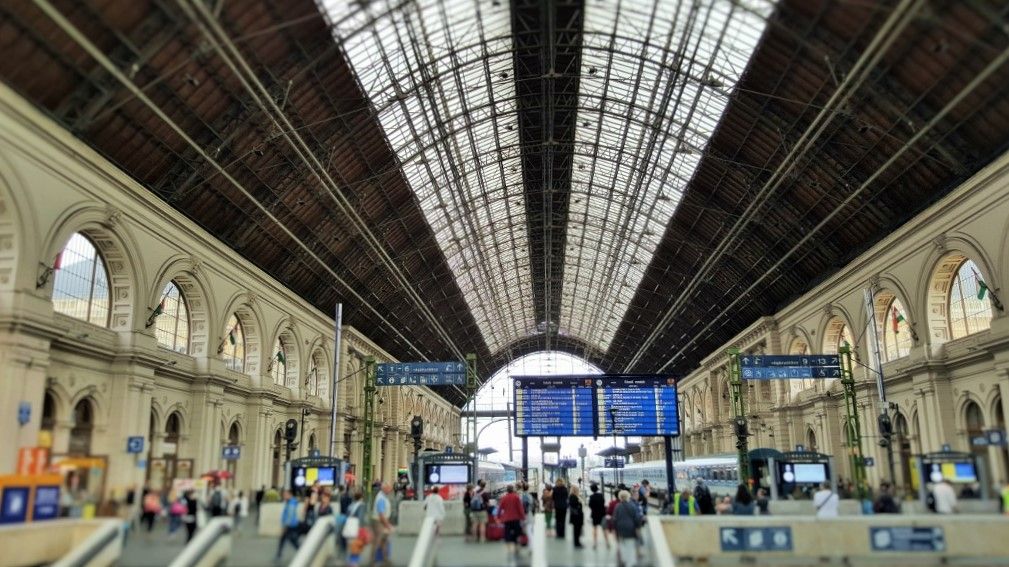 Budapest-Keleti has recently lost its status as the primary international rail hub in the Hungarian capital, now that the daytime trains to and from Germany, Poland, Slovakia and the Czech Republic have been switched to Nyugati station.
Any timetable changes won't diminish its status as Hungary's most beautiful large railway station and Budapest Keleti combines a rare feat of having an exterior as stunning as its interior.
Comparatively unaltered since its opening 1884 it resembles a living museum to the romantic age of train travel - though if you will be travelling with heavy luggage, it's not particularly user-friendly.