Episode 10: the best of Germany by train

A day trip which included Germany's most thrilling rail journey and its most romantic!

By Simon Harper
| about 2 months ago
GermanyInspire

A key criteria in planning my itineraries is to minimize the number of different locations in which to spend the night.
Not having to deal with my luggage while on a journey gives me much more freedom to explore every corner of a station, to check out all of its facilities and access points; and to seek out perspectives from which to capture images that hopefully inspire others to experience these stations for themselves.
You almost certainly won’t be on a similar quest to see as many stations and travel on as many trains per day as possible, but I still advocate that using a rail pass to take adventurous day trips can be a great means of enhancing any rail travel itinerary.

The reason being is that biggest negative of exploring Europe with a rail pass is that managing large items of luggage on trains and at stations can often more awkward than it should be in 21st century Europe.
Large items of items of luggage simply won’t fit into the overhead spaces on many recently introduced trains and even when luggage spaces are provided, you usually have to accept that you won’t be able to see your luggage from your seat.

More escalators are being made available at major stations, but the primary function of the lifts which are provided, is understandably to provide those who require mobility assistance, access to the trains, so at some major stations, these lifts are solely available to these travellers.
And when lifts are available to travellers with luggage, they tend to be somewhat hidden or otherwise awkwardly located.
Which is a rather long-winded means of saying that planning an itinerary, so that you keep the days on which you have to travel with all of your luggage to a minimum can be a very good idea indeed; though this isn’t something which needs to be front of mind, if you will be travelling on as few trains as possible.

So at last I come to the point, which was that I was heading off my second day trip from Koln sans luggage, on a mission to dedicate this particular Monday, to experiencing the best of what the German rail network has to offer; how very thrilling!

The first item on the check list was journey on Germany’s fastest route, the high speed line between Siegburg-Bonn station and the station at Frankfurt Airport.
Without meaning to cause offence, a train journey between Siegburg/Bonn and Frankfurt Flughafen doesn’t at face value, seem like it should be a highlight of seeing Germany by train, but trust me, it is very extraordinary indeed.

There’s probably a complicated mathematical equation which explains why high-speed travel often doesn’t feel particularly fast, but when looking sideways across a landscape, without any landmarks to give a sense of time and distance, the fact that you’ll be moving at more than 90 km/h faster than on a conventional express train can be tricky to ascertain.
However, this route isn’t like that, in fact it’s the closest European train travel comes to an adrenalin-fuelled rollercoaster ride!

By the time this line between Siegburg-Bonn and FrankfurtFlughagen came to be constructed more than a dozen high–speed railways across Europe had already opened, so the engineers could take a reasonable guess at the outer limits of the possibilities of high-speed infrastructure .
The route traverses the Taunus Mountains, but a decision was evidently taken to the limit the amount of tunnels required to a minimum.
Instead wherever possible the trains would travel up and over the hills, but the existing ICE trains weren’t capable of making these ascents, hence the introduction of the ICE3 trains.
As these trains rush up and down the slopes at more than 220 km/h the G-force is tangible, so if you want to experience the wow-factor of travelling on a European train, this is the route to take. 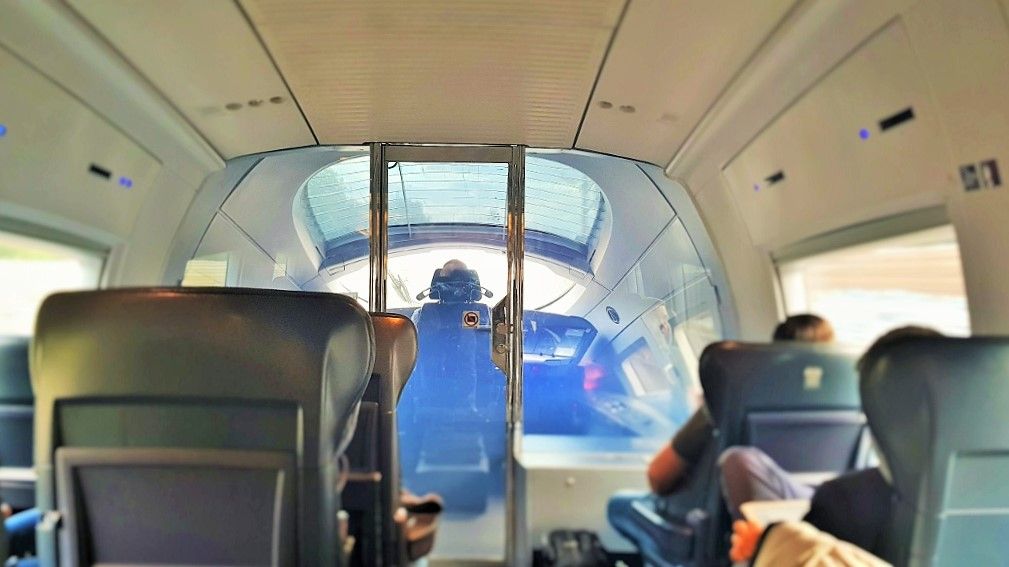 It’s also a route which justifies those slightly bizarre lounge seats on ICE 3 trains which are located behind the driver, as from here the rises and falls along the route can be best appreciated.
As I was going to be repeating the journey the next day, for once I just sat back and enjoyed the moment, while noting the best locations to film the journey on the next day’s travels.

I left the train at Frankfurt Fughfhafen Fernbahnhof, the station especially constructed so that high speed ICE trains could serve the airport in Germany which has the most international flights. 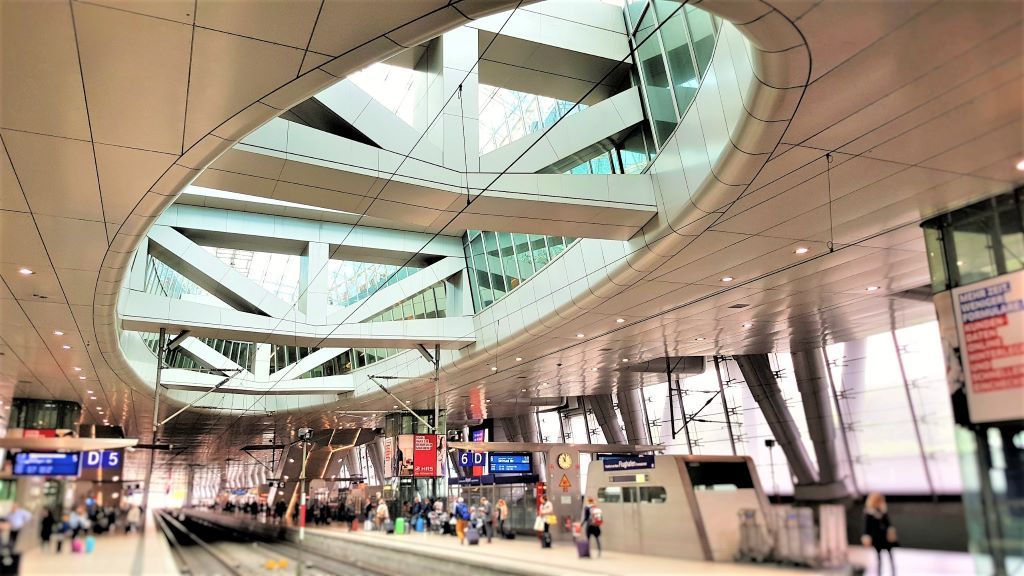 Building a high speed rail station at an airport is apparently a ludicrous notion to Britain’s decision makers, as a station at Heathrow Airport would have placed a huge tick in the ‘Is there any point in building HS2’ box.

Apparently the notion that rather making a connection into another jet fuel guzzling aircraft, when traveling from the far off lands to the likes of Manchester, Newcastle, Glasgow and Edinburgh, thousands of people would actually prefer a high speed train to a city centre location, was missed.
Despite Frankfurt’s airport station now being a primary hub of the entire German high-speed rail network, with regular trains to every other major city in the country.
Many of thousands of people who board trains in Frankfurt Airport every day could have flown on to Berlin, Hamburg or Munich etc, but they don’t.

Through the Rhine Gorge

That high-speed line isn’t the only incredible journey which can be taken when travelling by train between Frankfurt and Koln/Cologne.
What justified the high speed line’s construction is that express trains have to travel comparatively slowly on the original route because of all the curves that have to be negotiated.
The reason for those curves is that the railway had to be constructed on the banks of the River Rhine as it carves a passage through the wonderfully beautiful Rhine Gorge. 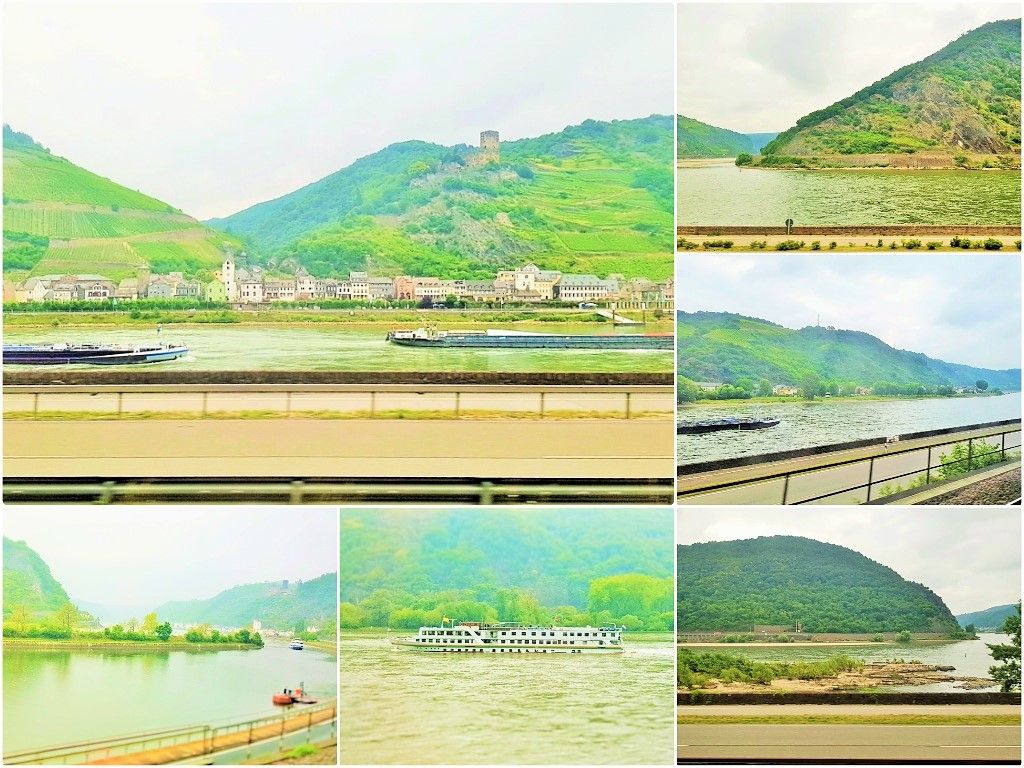 As a result the railway journey between Bingen and Bonn is exceptionally wonderful, but you don’t have to take my word for it.
The European Rail Timetable houses a page which lists what its compilers consider to be the 177 most beautiful rail journeys which can be taken in 26 countries, but the 20 journeys which are the most fantastic of all, are awarded a star.
Only four of those starred routes are taken by express trains and that route through the Rhine Gorge is one of them.

So after heading on from the airport to Frankfurt (Main) hbf, to be awestruck by Germany’s paradise for rail fans, I was now heading off north on my third train of the day through the fantasy land of hill top castles and majestic river views, on route to Koblenz.

I rarely dare to disagree with the compilers of the European Rail Timetable, without their diligence I wouldn’t be writing this now and I very much doubt that any journey planning app will ever inspire as many journeys as they have.

However, when I got to Koblenz having travelled through the Rhine Gorge on a train from Frankfurt, I then took the route to Trier, as it’s also cited as one of the 22 most scenic railway lines in Germany, but without a star.
However, in my most humble opinion, the best of the views from the trains on this line by the River Moselle, are even more wonderful than those that can be enjoyed while traveling through the Rhine Gorge. 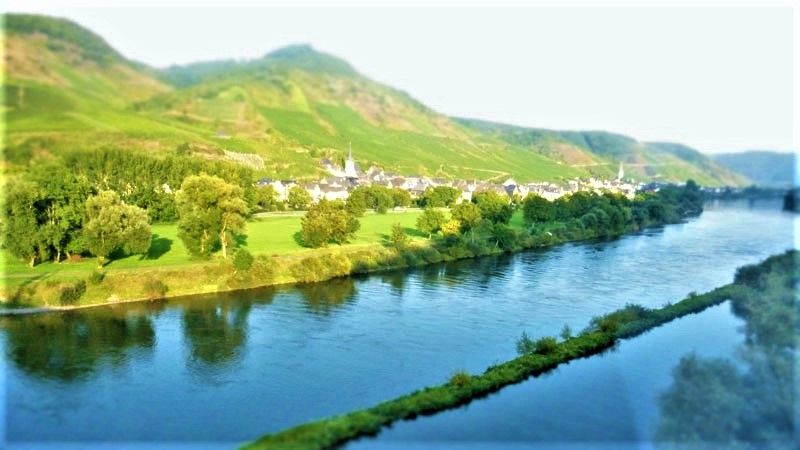 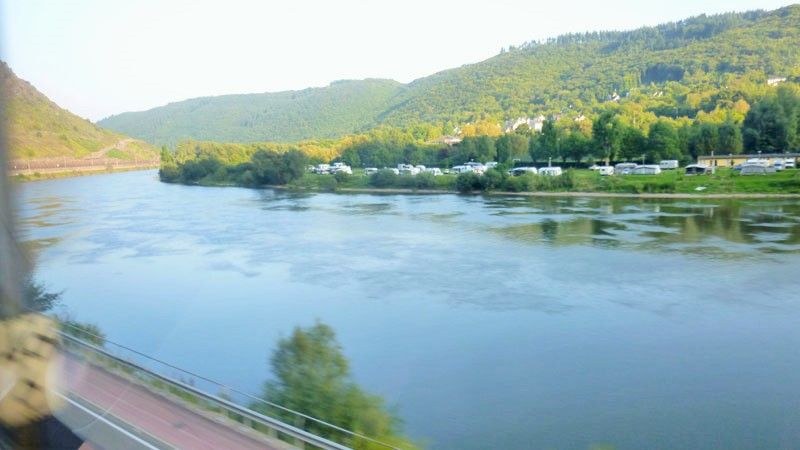 When travelling through an epic landscape, looking down tends to be more spectacular than looking up, and what makes much of the 45-60 minutes of the journey between Koblenz and to the south of Bullay so special is that the railway is located higher up on the sides of the valley.
So you can look down on those taking a ride on the river boat cruises, particularly if you sit in the upper deck on the train.

Trust me the on this one, the images I managed to capture don’t do it justice, the curves on the upper deck windows make things trick on a sunny late afternoon.

Despite the views being available when travelling along the west bank of the river, take a seat on the left when boarding in Koblenz, as the train will initially head north before looping around to head south.