How to travel on the RhB (Rhätische Bahn/ Rhaetian Railway)

How to travel on the Rhaetian Railway network including details of the routes, trains, scenic highlights, connections, ticketing and rail pass usage.

The Rhätische Bahn/ Rhaetian Railway isn’t one line from one place to another, it’s a network of routes in south east Switzerland.

And both of these lines have merited inclusion on the list of the 15 Most Beautiful Swiss Train Rides - the Chur <> St Moritz route at No.4 and St Moritz <> Tirano is at the top spot! 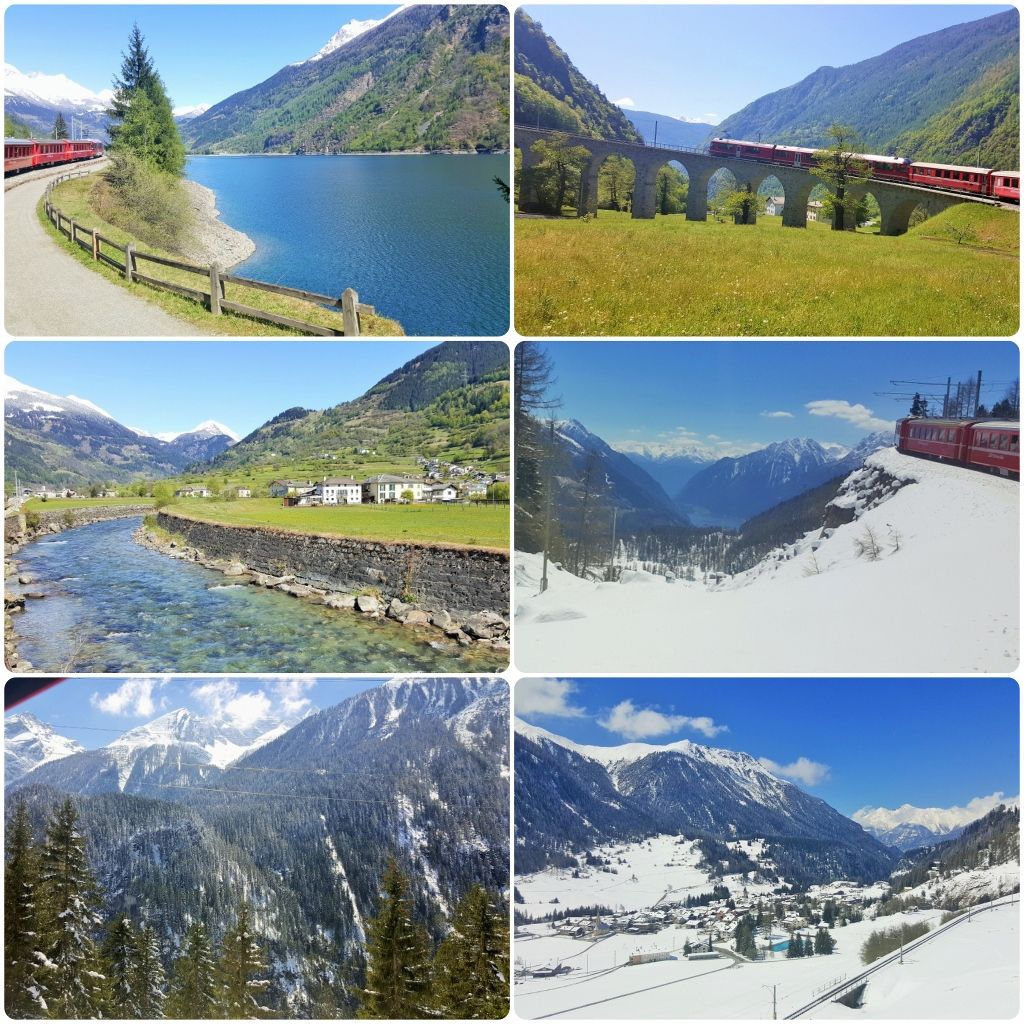 The Bernina Route is also featured on Wanderlust's list of Five Fabulous Offbeat Rail Adventures AND on Far And Wide's list of the Most Remarkable Train Journeys in Europe.

The Bernina Express (see below) is the only DIRECT train service that travels on the both The Albula and The Bernina routes and connects Chur with Tirano.
Though if you're willing to make two straightforward connections, you don't have to take the Bernina Express in order to make the incredible journey between Chur and Tirano, the most spectacular route taken by RhB's trains.

The regular trains that travel on The Albula and Bernina Routes also have on board maps and commentary that point out the multiple scenic highlights.

Usually the connections between RhB trains involve only waiting a few minutes between trains and the timings are very reliable.
Popular journeys by REGULAR trains, that require connections are:

RhB operates multiple types of regular trains, the more modern of which have larger windows, but on the older trains the windows can be opened - which can help with taking photographs.
On some departures both older and newer trains are joined together.
Catering is not available on board the regular RhB trains.

A tick in the box for travelling 1st class on the regular RhB trains, is that 1st class tends to be much quieter, so you can virtually guarantee having window (seats) and you can also dart across the train from one side to the other to take in all the best views.

In winter many trains on the Chur to St Moritz route also convey observation cars in addition to the ordinary coaches.
Seats in these observation cars must be reserved prior to boarding the train and have a higher fare than standard tickets.

All rail pass users must pay a reservation fee/supplement to travel in these observation coaches.

The Bernina Express is the only train to operate direct in either direction between Chur and Tirano.
A supplementary fare is charged on the Bernina Express and the train(s) have especially large panoramic windows.

Rail pass users, including Swiss Travel Pass users need to pay a reservation fee/supplement to travel on The Bernina Express that can be booked here .

One train in each direction per day, branded ‘Engadin Star’, provides a direct service between Landquart and St Moritz via Klosters

Using rail passes on these trains:

Using Rail Passes on the Glacier and Bernina Express services between RhB Stations: If you have a Swiss Travel Pass or a Eurail/InterRail pass valid in Switzerland you can also now travel on the Glacier Express between Disentis/Muster and St Moritz* on payment of the reservation fee.
Though the fee is only particularly good value if you want to take the entire journey over the RhB section of its route between Disentis/Muster and St Moritz.
Use the booking pages on The Glacier Express website and select your rail pass on the 'reductions' list.
*The same rail pass reservation fee applies on any journey by Glacier Express including the entire journey between St Moritz and Zermatt

Also The Bernina Express rail pass reservation fee/supplement that can be booked here is cheaper and it also includes the complete RhB route from Chur to Tirano.. 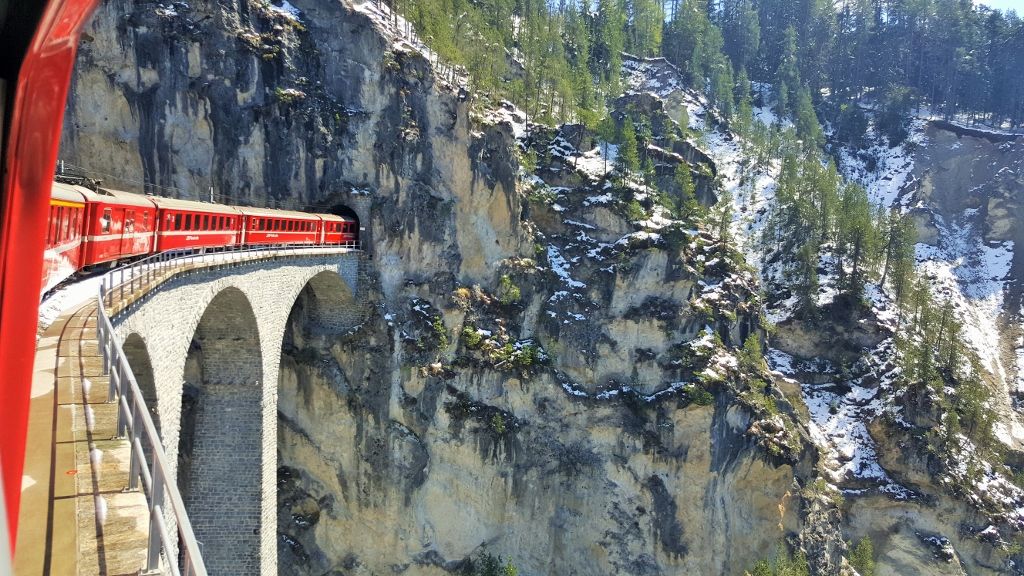 The most iconic structure on the RhB network is the Landwasser Viaduct.
It's located between Reichanau-Tamins and Filisur just to the north of Filisur station and is used by trains on the the Chur - Samedan - St Moritz route (trains between Filisur and Davos don’t cross the viaduct).
For the best views of the viaduct and tunnel - you need to be on the right of the train AND facing the direction of travel, when heading south from Chur (and on the left facing backwards when heading north from Samedan/St Moritz). 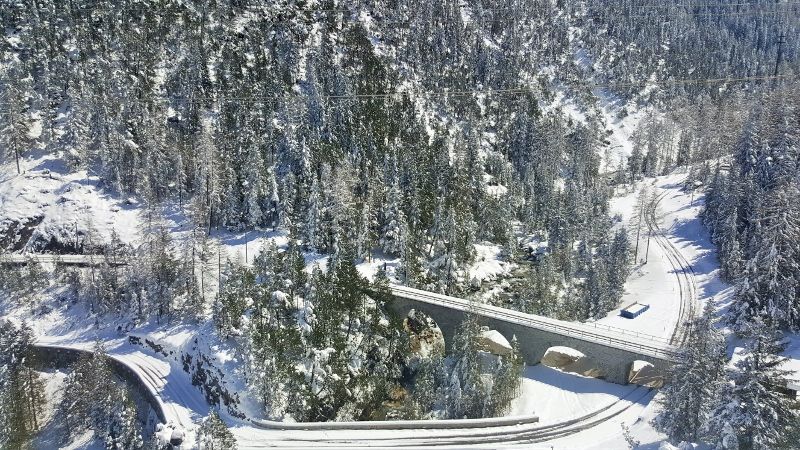 When heading south from Chur on the Albua route to St Moritz the best views of the spirals between Bergun and Preda, pictured above, that the line takes as it climbs up to the Albula Tunnel, are on the left (so are on the right when heading north).

However, arguably the most spectacular line on the RhB network is the Bernina Line between Pontresina and Tirano.

On this line, when heading north* from Tirano - the best views of the beautiful Lago di Poschiavo and the spectacular ascent up from Poschiavo, can be seen from the right of the train. 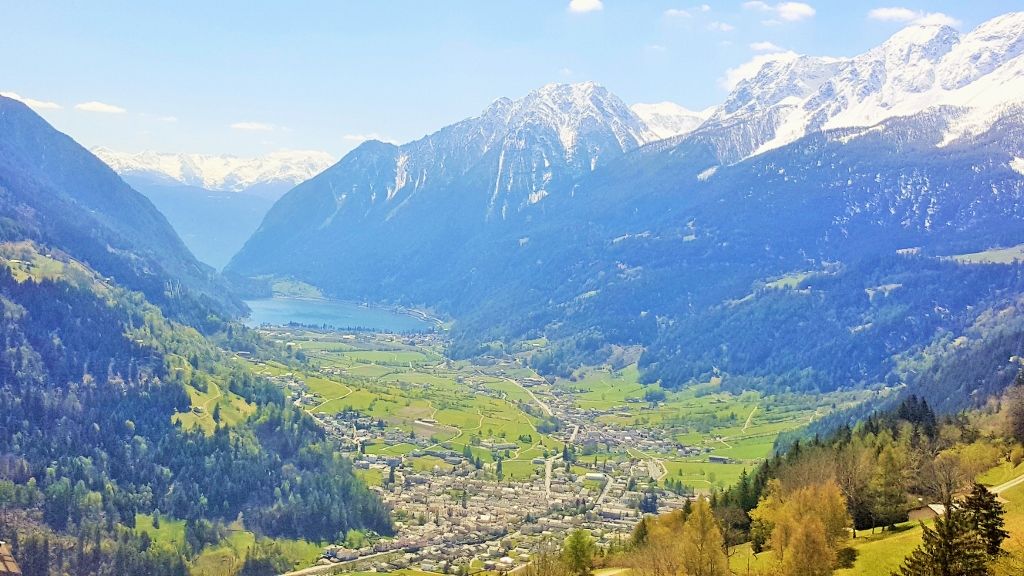 Though as the train enters and traverses the Bernina Pass, between before Alp Grum station and Morteratsch station, when heading north, the best of the views are on the left – and this includes Lago Bianco, frozen in winter and turquoise in summer. 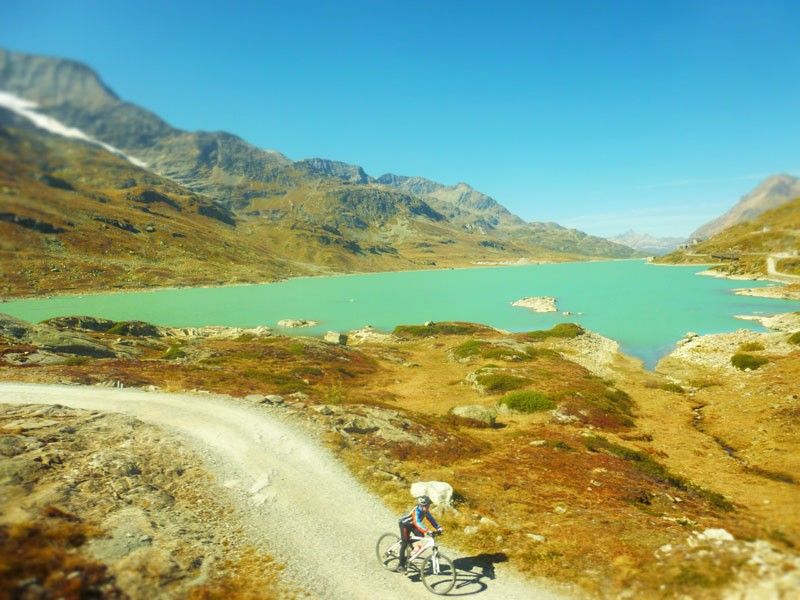 *flip the sides of the train advice when heading south.

Corviglia winter sports area is accessed by the St Moritz Corvilgia funicular and its base station is a 5 - 10 min walk from St Moritz RhB train station.

Parsenn winter sports area is accessed by the Parsenn Bahn funicular and it base station is a few minutes walk from Davos RhB station.

Scuol Motta Naluns - Scuol Tarasp station is a couple of minutes from the cable car station.

Connections with mainline trains are available at Landquart and Chur.
From both Chur and Landquart stations direct trains operate to/from Basel, Zurich and Buchs - at Buchs connect for Railjet trains to/from Austria.
There are also 2 x ICE trains per day that provide a direct service between Chur/Landquart and Hamburg, Hannover, Frankfurt (Main), Mannheim and Karlsruhe.

Buses operate between Scuol-Tarasp and Landeck station on the Austrian main line between Bregenz and Innsbruck (change of bus required).

Buses also link Tirano with the resort town of Lugano on Lake Como.

Connections with trains to/ from Milano are available at Tirano.

Tickets between SBB stations and RhB stations can be booked on the SBB booking service.

If you have a Eurail/InterRail pass, you won’t have to pay any additional charges for journeys in either direction between Milano and Zurich (and beyond).
There are easy connections available in Tirano, Pontresina, Samedan and Chur.
It’s possible to set off from Milano in the morning, travel up to Zurich via Tirano and Chur and arrive in Zurich in time to catch the final train of the day back to Milano (a risk that can be worth taking!)