Thanks to its location in the UK capital’s commercial heart, the City of London, Liverpool Street station is a particularly busy commuter hub, and with an average of more than 30 departures in every hour, it’s never quiet.

Looking towards platforms 1 to 4, the bus station is to the left
The part of Liverpool Street station used by the trains to Cambridge, Norwich and Stansted
The eastern side of the station looking towards the ticket office to the right of platform 10
The entrance to the station on Liverpool Street
The fantastically evocative architecture with platform 1 on the right
The roof over platforms 1 - 10 is a fabulous example of 19th century station architecture

Location Station Website Station Map/Diagram Live Departures Changes to Train Schedules Onward Journey Planner Underground Line Status Underground Map Buses from Liverpool Street Greater Anglia Trains Stansted Express
The western side of the concourse, the steps on the left are above the entrance to the Underground
The lift down from street level to the concourse is below the war memorial

Though it’s likely that even the regular commuters probably appreciate that the pioneering renovations carried out in 1991, proved to be a text book example of how to preserve the 19th century glory of a station, while creating a space that’s infinitely more user friendly than it had ever been previously.

The concourse spans the station and provides level access to all the platforms, which the mainline trains depart from.
Though what’s unusual about Liverpool Street is that this concourse is below street level, so it is accessed by escalators and stairs.

There is a street level walkway, which both surrounds and spans the concourse and by the rear of the station building, beneath the war memorial, is a lift (elevator) which connects the entrances/exits to the concourse.
So you shouldn’t have to use the stairs and escalators to access the trains when arriving at Liverpool Street on foot, or by bus and taxi.

The main departure board, note how it is split in to east and west sections

The train services tend to leave from specific sets of platforms (tracks) according to their destination – though note there can be some overlap;

Platforms 1 -5 are used by the local trains to destinations in north-east London including Hackney, Stoke Newington, Tottenham, Walthamstow and White Hart Lane

Platforms 11 – 18 is where the trains to destinations on the Essex coast including Clacton, Harwich and Southend-On-Sea depart from.

This separation of the train services according to destination is also reflected on the main departure board, which hangs down from the roof, so it in effect divides the concourse into two halves.

Though the 'Stansted Express' departures are listed in their own separate column on the far right.

The details of the trains are also listed in departure orders, so that the next train to leave is constantly moving to the left, so working out which platform your train will be leaving from can require some patience.
Though if you are confused the staff at the information desks on the concourse can come to the rescue; there is a dedicated desk for the Stansted Express.

You’ll have a less-stressful travel experience if you aim to at Liverpool Street, ready with ticket in hand, 10 – 15 minutes before your train will be departing.
Give yourself time to absorb the train departure information and as seat reservations aren’t available on any departure, except the trains heading to Norwich, being able to be among the first wave of travellers to board, is a big plus.

Descending into the Elizabeth Line at Liverpool Street

Farringdon
Taking the Elizabeth Line between Liverpool Street and Farringdon will be around 5mins quicker than taking the Underground with improved step-free access to and from the trains at both stations.
At Farringdon an easy interchange is available between the Elizabeth Line and the Thameslink trains which are direct to St Pancras for Eurostar and the stations at Luton and Gatwick Airports; and to the likes of Brighton, Cambridge and St. Albans.
At St Pancras the Thameslink station is a 2 min flat-walk from King's Cross station.

Tottenham Court Road
The Elizabeth Line trains will be around 5 mins quicker than taking the Central Line.

Bond Street; opens later in 2022:
The Elizabeth Line trains will be around 7 mins quicker than taking the Central Line.

Paddington:
Taking the Elizabeth Line to Paddington station is faster and easier than taking the Underground, the entire route is step-free thanks to the escalators and elevators at both stations.

Liverpool Street is served by the Central, Circle, Hammersmith & City and Metropolitan Lines and there is an obvious entrance to the Underground station shared by all the lines as well as the Elizabeth Line, on the mainline station concourse; its opposite platforms (tracks) 3 – 6.

The Central Line connects Liverpool Street with the heart of the city and the West End, so it’s always busy.
All eastbound trains call at:

The Central line uses a distinct part of the Underground station at Liverpool Street, its platforms are deep below ground, so they can be accessed by elevator and escalator.

These three lines all share a separate part of the Underground station, which is level with the main station concourse.

As a consequence of this the eastbound platform used by all three lines has step-free access to and from the mainline station; and the Underground trains from Paddington and Baker Street and Kings Cross, St Pancras and Farringdon all arrive here.

The Circle trains heading to:

Though the Circle Line trains only usually depart every 12 minutes and they can be a tad slow; they initially heading east before turning to the west.
Therefore if you don’t have heavy luggage it can be quicker to take the westbound Central Line and make connections.

The quickest route to Waterloo is to take the Central Line to Bank and connect there for the Waterloo and City line (except on Sundays).
For Victoria the best option is to make the connection into the southbound Victoria line at Oxford Circus, while the quickest route to South Kensington is usually to connect at Holborn into a westbound Piccadilly line train.

In contrast to the eastbound platform, the westbound platform used by the Circle, Hammersmith & City and Metropolitan Lines can only be accessed by stairs.
Any train from this platform will stop at Baker Street and Kings Cross, St Pancras though the easier step-free route from Liverpool Street is to take the Elizabeth Line to Farrindgon and connect there for a northbound Thameslink train.

Not only do the Circle, Hammersmith & City and Metropolitan Lines share platforms, the trains also look identical, so take care to check the names of the lines and the destinations, which will be on the side of the trains.

Liverpool Street has a bus station up at street level by platform 1, so if you take a bus to and from here, you won’t have to navigate the streetscape around the station. 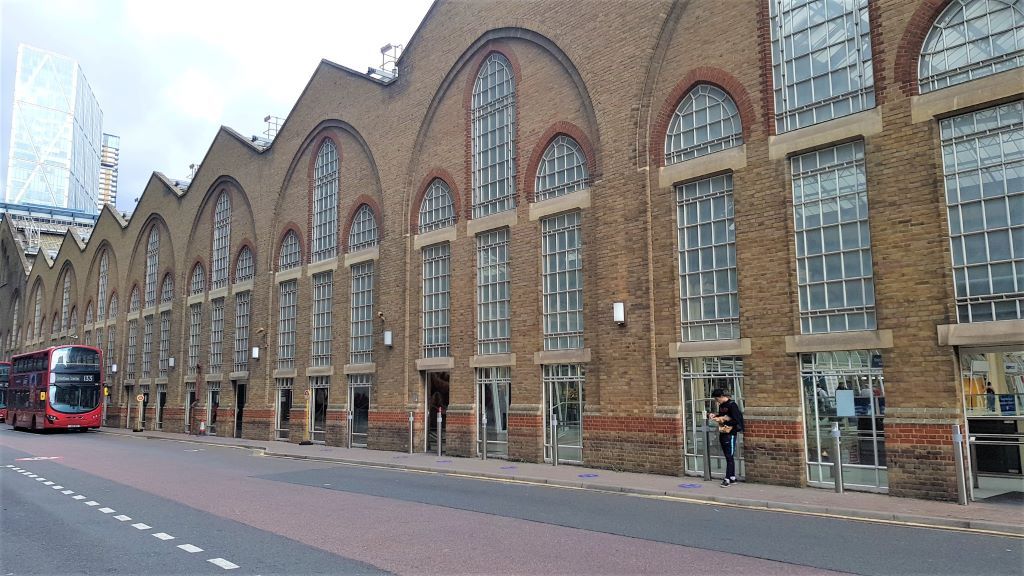 # Jump to a direction

London to Cambridge by train

How take a rail journey from London to Cambridge

There are three options available for taking the train from London to beautiful Cambridge:

London to Norwich by train

How to take the rail journey from London to Norwich

The £millions invested on this route have transformed this journey, with brand new trains providing the fastest ever service, with hundreds of additional seats available in every hour.

Manchester to Liverpool by train

How to take a rail journey from Manchester to Liverpool

Trains from Manchester take two different routes:
(1) The fastest are those operated by TP Express which depart from Victoria station
(2) Other trains depart from Piccadilly station

This is one of more than 300 station guides available on ShowMeTheJourney, which will make it easier to take the train journeys you want or need to make. As always, all images were captured on trips taken by ShowMeTheJourney.