From Paris Montparnasse station to the Gare Du Nord by Metro

By Simon Harper
| over 1 year ago
HelpEurostarStationsParis

Why take the Metro

A service of underground commuter trains, known as RER trains, can speed travellers from the Gare De Lyon to the Gare Du Nord in less than 10 minutes, but there is no such service between the Gare Montparnasse and the Gare Nu Nord on the other side of the city centre.

So if you don’t want to take a taxi, the taking the Metro between these two stations is the only viable option.
It looks straightforward, as Metro Line 4 provides a direct link between Montparnasse and Gare Du Nord (direction Porte de Clignancort), but it is not step free, so isn't suitable for those with restricted mobility, or if you want to avoid having to carry luggage.

Taking the Metro is also at least 5 x cheaper than taking a taxi and almost certainly faster too, despite it being a 14 stop journey; so you will be on the train for around 20 - 25 minutes.
Line 4 is also the 2nd busiest Metro line 4 in Paris; so try to time it so that you’ll be using outside of rush hours.
The typical total transfer time, from stepping off a TGV at Gare Montparnasse to being at the Gare Du Nord will around 35 - 40 minutes.

However, if you are connecting to the Eurostar and have Standard or Standard Premiere tickets, you will need to allow a minimum of another 30 mins to pass through check-in etc.
So when booking connections into Eurostar trains avoid any journey with less than 1hr 20 mins between the scheduled arrival at Montparnasse and the departure time from Gare Du Nord

Step One: Walk ahead to the front of the train and exit on to the main concourse (the only exit from the platform/voies).

Many TGV trains that arrive at Montparnasse can be 20 coaches long, so if your reserved seat is towards the rear of such a train, it will take more than 5 mins before you step on to the main concourse at the station.

Step Two: When you have reached the concourse (where the main departure board will be hanging from the roof), keep going ahead of you until you are in the Hall 1 area of the station.
You will see two banks of escalators and stairs, both of which connect this Hall 1 to the entrance to the Metro station, which is located two levels below. 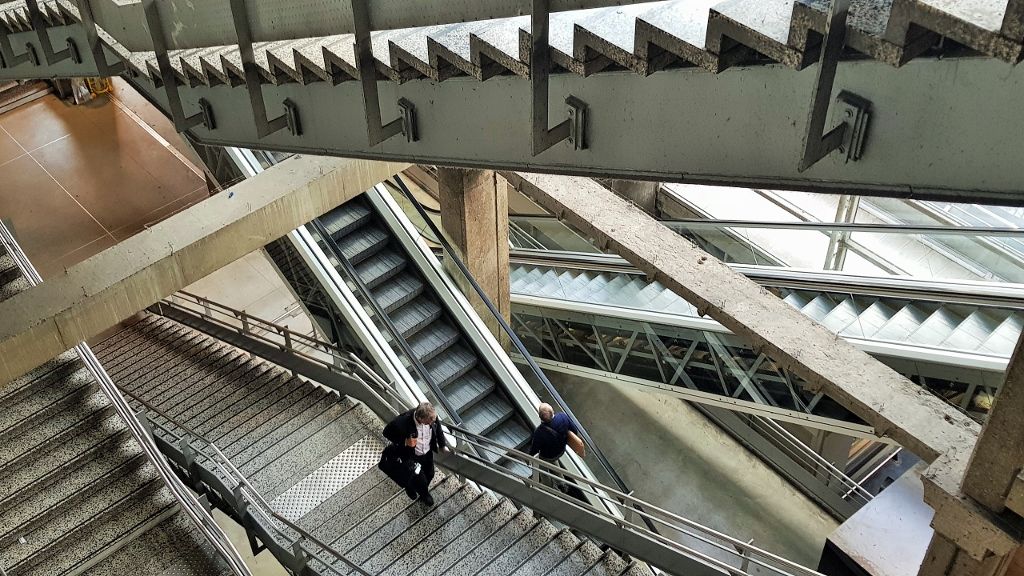 Though a tad annoyingly both escalators can be switched so that they don’t allow people to descend.
When that is the case and you have luggage it can be worth seeking out the somewhat hidden lifts/ascenseurs.

Step Three: The Metro station is located at the foot of the atrium which houses these stairs and escalators.
When you have reached the foot of this atrium, there are a few steps UP to the Metro entrance.

Step Four: Buy a ticket at the counter or machines - the machines have excellent English translation, but look out for the easy to miss 'confirm your purchase' button.
(Your end-2-end train journey ticket will not include the Metro).

Step Five: The Line 4 trains depart from the part of Montparnasse – Bienvenüe metro station that is located furthest away from the entrance to the Metro.
The longest passage way between the entrance and Line 4 houses a travellator. 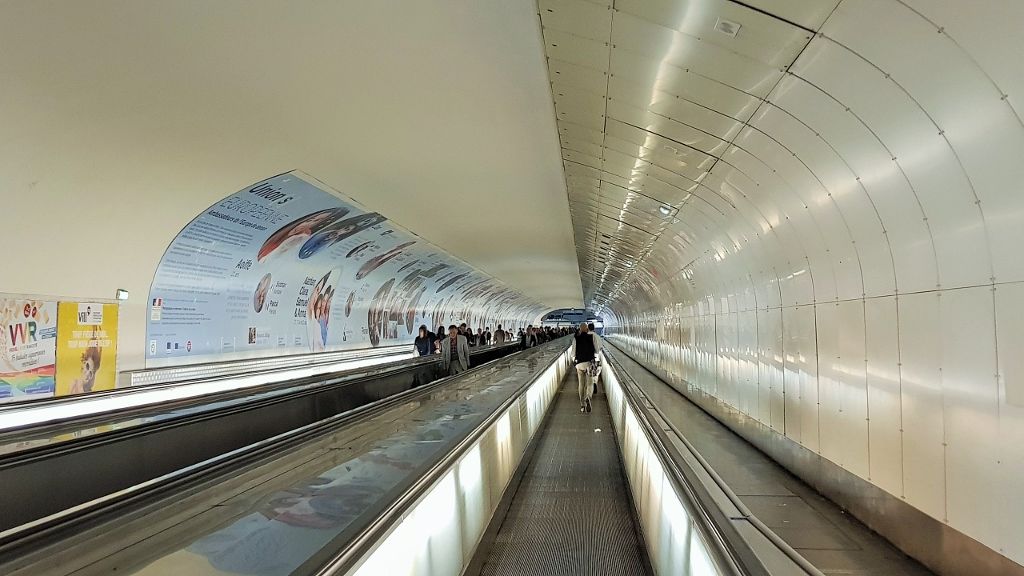 You will need to go down a set of stairs to access the platform/voie which the trains heading to Porte de Clignancort will depart from; there is no escalator or lift access. 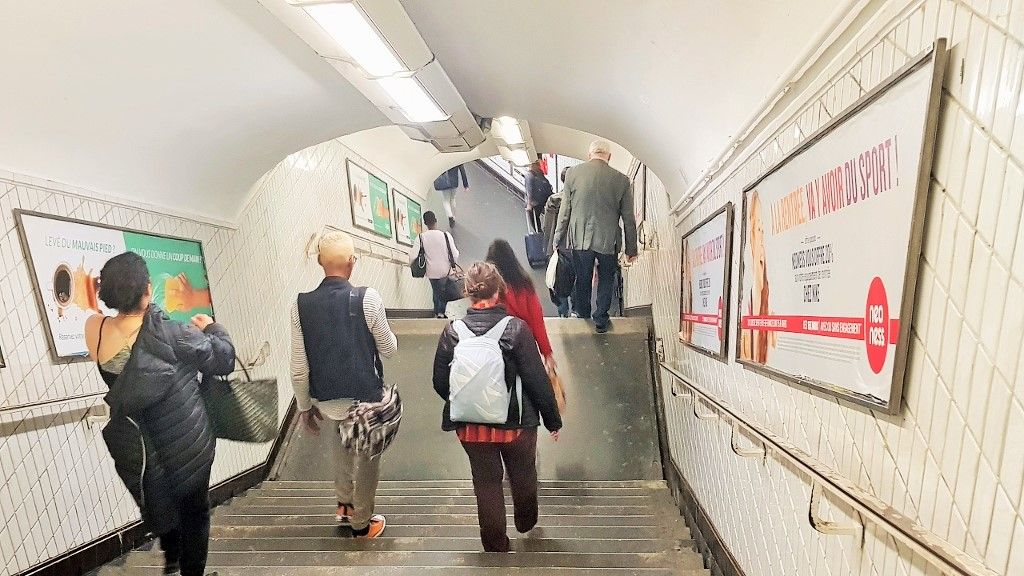 Step Six: On arrival at Gare DU Nord you will have to use a short flight of stairs, located towards the front of the train, to access the exit from the Metro.You will exit into an atrium, pictured below, from where you will see the main concourse at the Gare Du Nord above you. 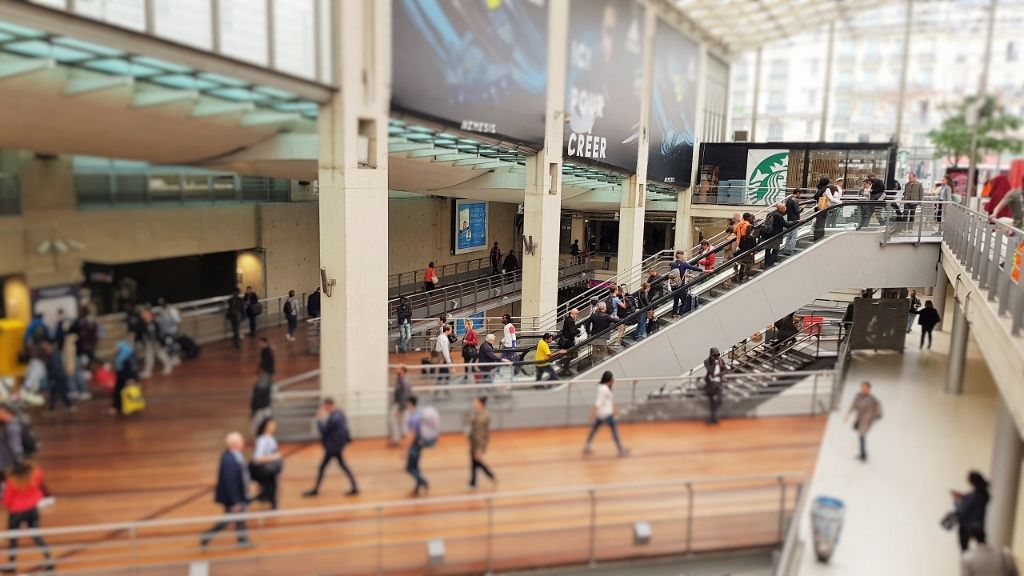 In this view taken from above, the exit from the Metro station is in the far left corner, to the right of the blue poster - the escalator in the middle of the picture is the main link up to the main departure concourse.

Take the escalators or lifts up to the main concourse, where the trains will be lined up at their respective voies/platforms over to the right.
Then walk ahead of you to access the part of the concourse adjacent to where the TGVs and Thalys trains depart from.

Connecting to the Eurostar

When you have ascended up to the main concourse, you will have to go up another level to access Eurostar departures – the ‘Hall du Londres’.
The signage isn’t the best, but the escalators and lifts (ascenseur) leading up to Eurostar departures are located on the opposite side of the concourse to voies/platforms/tracks 14 - 15.
Look out for the Union Jack on the rear wall of the station concourse. 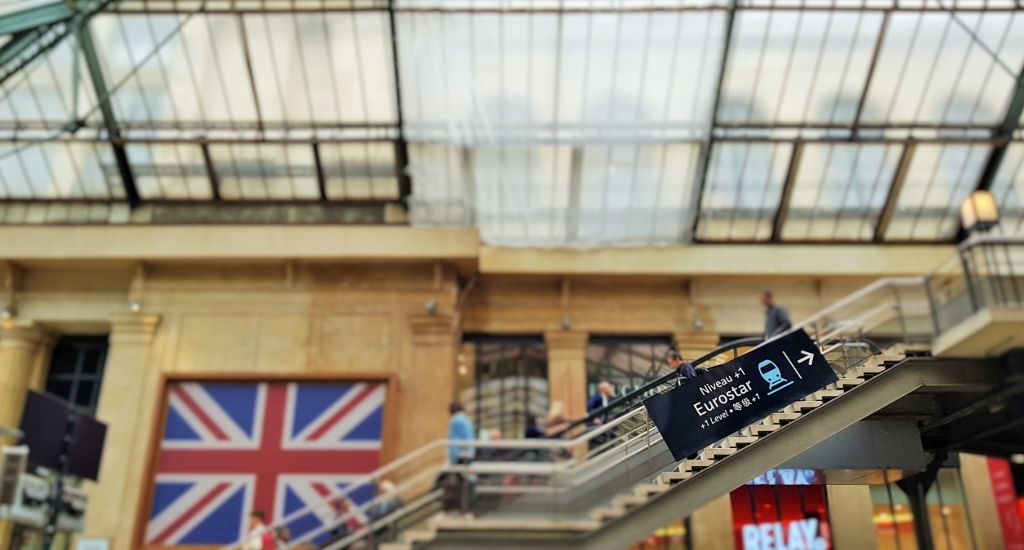 However, if you are connecting to the Eurostar and have Standard or Standard Premiere tickets, you will need to allow a minimum of another 30 mins to pass through check-in etc.
So when booking connections avoid any journey with less than 1hr 20 mins between the scheduled arrival at Gare De Lyon and the departure time from Gare Du Nord.

Other info to assist with French train travel

A general guide to arriving and departing from Paris by train

How to use the major stations in France

An introduction to French train travel