Great Britain is crossed by a swathe of spectacular railway routes, but you can't appreciate most of them from the comfort of an express train.
However, this journey between York and Aberdeen meets the criteria of Epic Express Train Journeys.

For most of the 5hr 10min journey between the two cities the views are spectacular, though the first 25 mins of this journey are exceptionally dull, as the train races across the flat countryside towards Darlington, but this is pretty much the only part of the journey which isn't delightful.

Around 15 mins after departing from Darlington comes the first highlight of the journey - the stunning views over the town of Durham.
Pictured below is the view of Durham's castle and cathedral which can be seen just before Durham station. 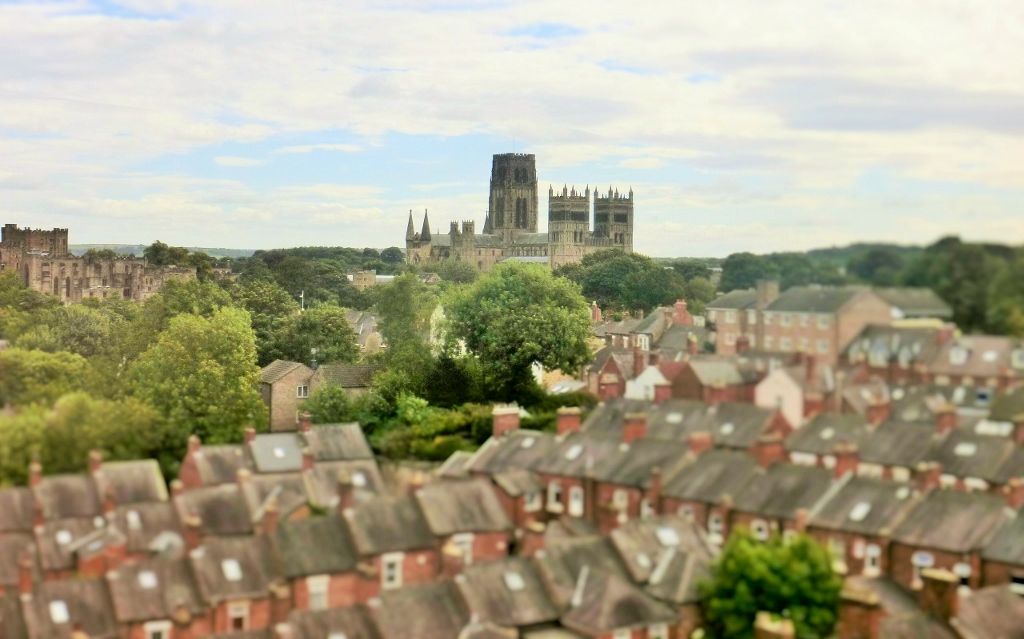 And below is the view over the town once the train has passed through Durham station. 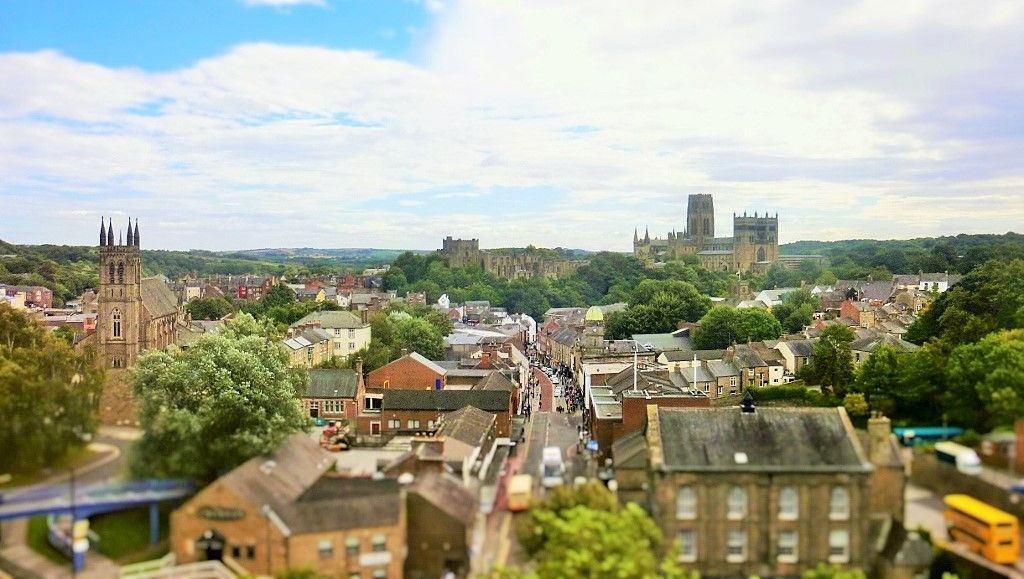 These views of Durham can be seen from the right of the train and on this journey all of the best of the views are on the right when heading north (so are on the left when heading south).
You don't have to reserve seats on these trains which typically depart York on Mondays to Saturdays at 07:37 and 11:54 and on Sundays at 11:52, but they're recommended.
So if your assigned seat is on the left, check to see if there any unreserved places on the right, you don't have to sit in the seat number on your reservation for your ticket to be valid.

After Durham the next highlight of the journey is the passage over the River Tyne, as the train approaches Newcastle Central station and heads over the King Edward VII Bridge. 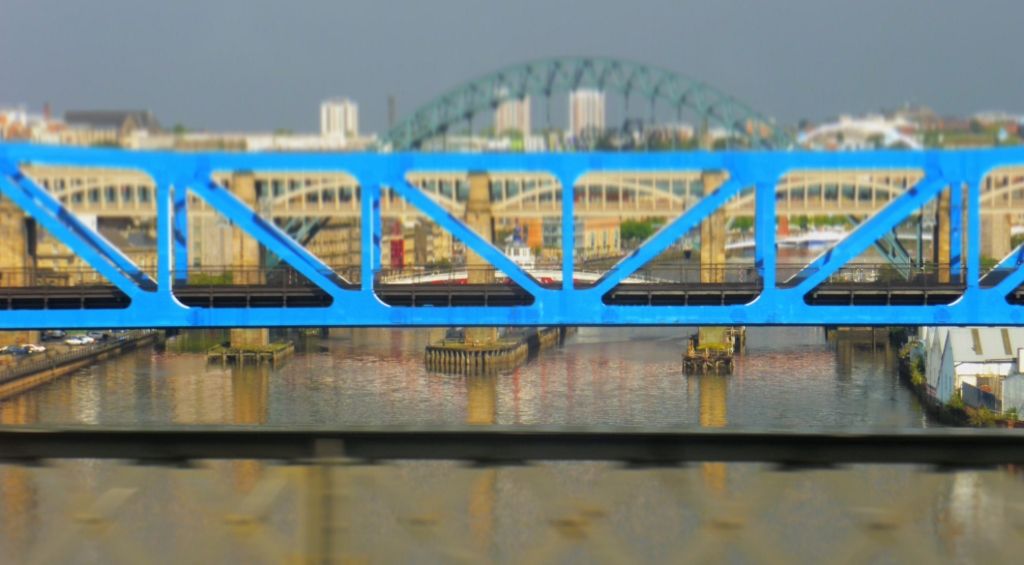 Looking to the right, five other bridges that span the river can be seen and from nearest to furthest they are - the Queen Elizabeth II Bridge, which conveys the Newcastle Metro over the river; the High Level Bridge; the Swing Bridge; the Tyne Bridge and the Gateshead Millennium Bridge.

The best views of the iconic Tyne Bridge can be seen just as the train departs from Newcastle and heads north; the building which resembles a plump caterpillar, is The Sage Gateshead auditorium

Around 30 mins after departing from Newcastle, the village of Alnmouth, pictured below, comes into view and beyond it lies the first glimpse of the North Sea, that can be seen on this journey.
From here northwards the route lives up to its name, 'The East Coast Mainline'. 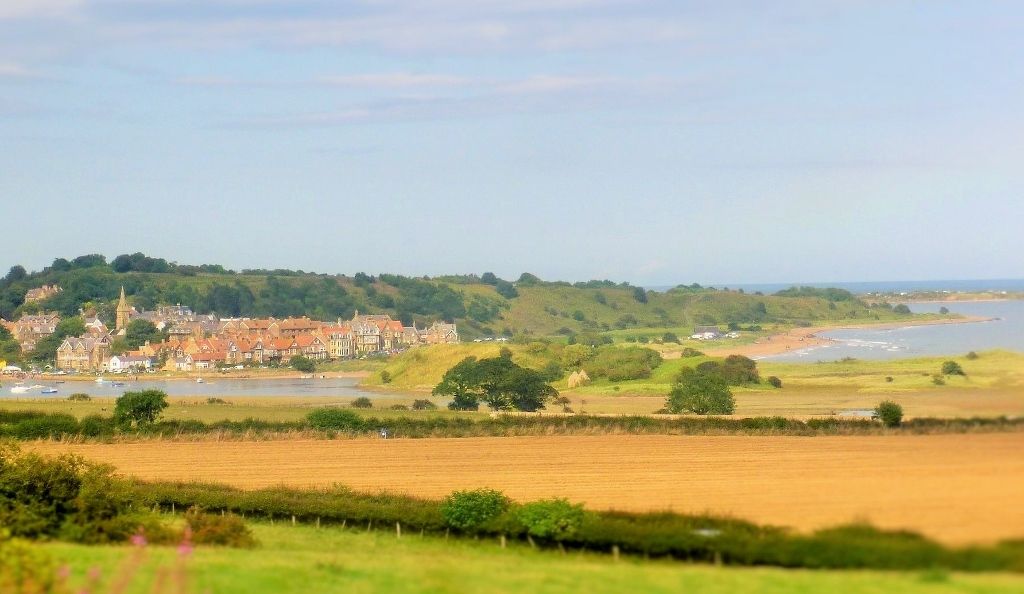 Shortly afterwards comes another dramatic distant seascape, and on a clear day the isle of Lindisfarne and its beautiful ancient monastery can be seen in the distance

; if your facing backwards you may also get a glimpse of Bamburgh Castle.

The train follows the coast until it reaches the outskirts of Berwick-Upon-Tweed, the most northerly town in England and then turns westward to briefly travel along the south bank of the Tweed estuary.

If you are in a seat facing forwards you'll be able to see the majestic Royal Border Bridge coming into view, but if you're in a backwards facing seat, the dramatic crossing of the River Tweed can take you by surprise.
Though despite the name of the bridge, the River Tweed isn't the border between England and Scotland, this is the view of the road bridges which also cross the river here, taken on a different day. 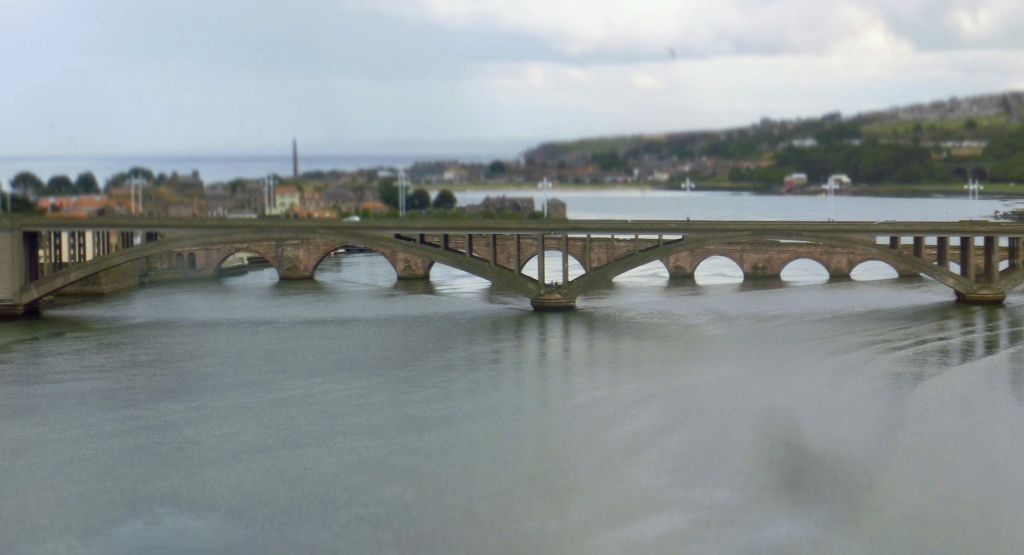 Around five minutes after the train has either passed through or departed from Berwick, it begins to travel across the cliff tops just after the train has crossed the border into Scotland.
Here you can enjoy some of the most dramatic coastal views on the journey, but to make the most of them, you need to be facing backwards or forwards, so that you can look down into the coves and bays, which makes taking pictures a tad tricky.

For around 15 minutes the railway line turns inland away from the coast to travel through the pretty valley carved by the Eye Water. 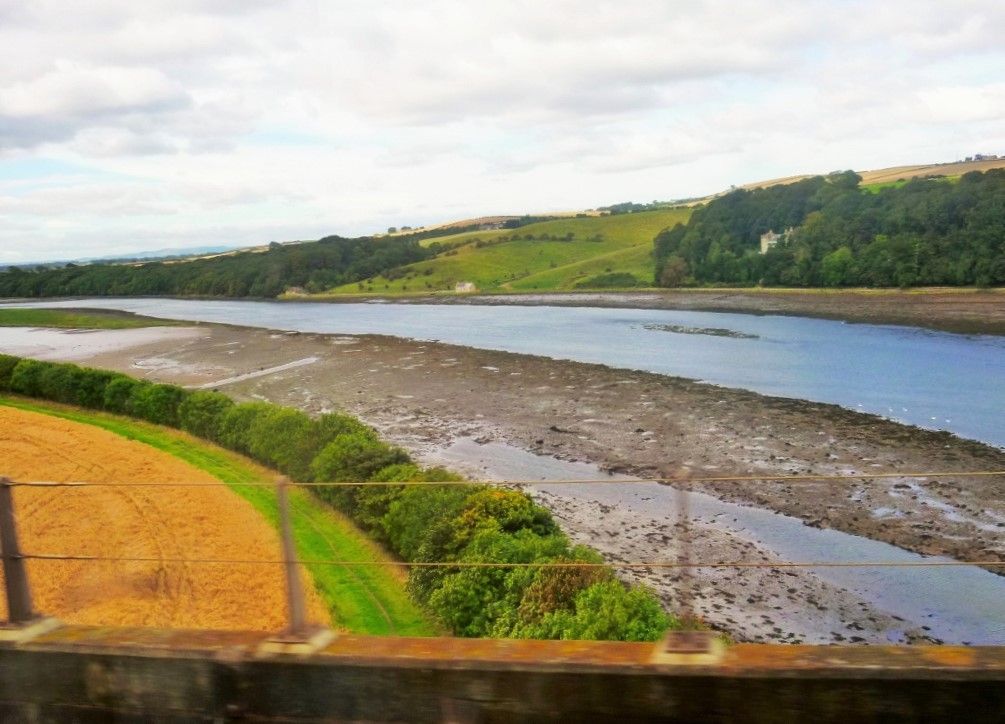 The coast then comes back into view south of Dunbar, this view below was taken just before the railway passes the Torness Nuclear Power Station.

Just as the train passes Dunbar, look out for the view of the island named Bass Rock and on the horizon beyond it is the north shore of the Firth of Forth, which the train will travel along an hour later into the journey. 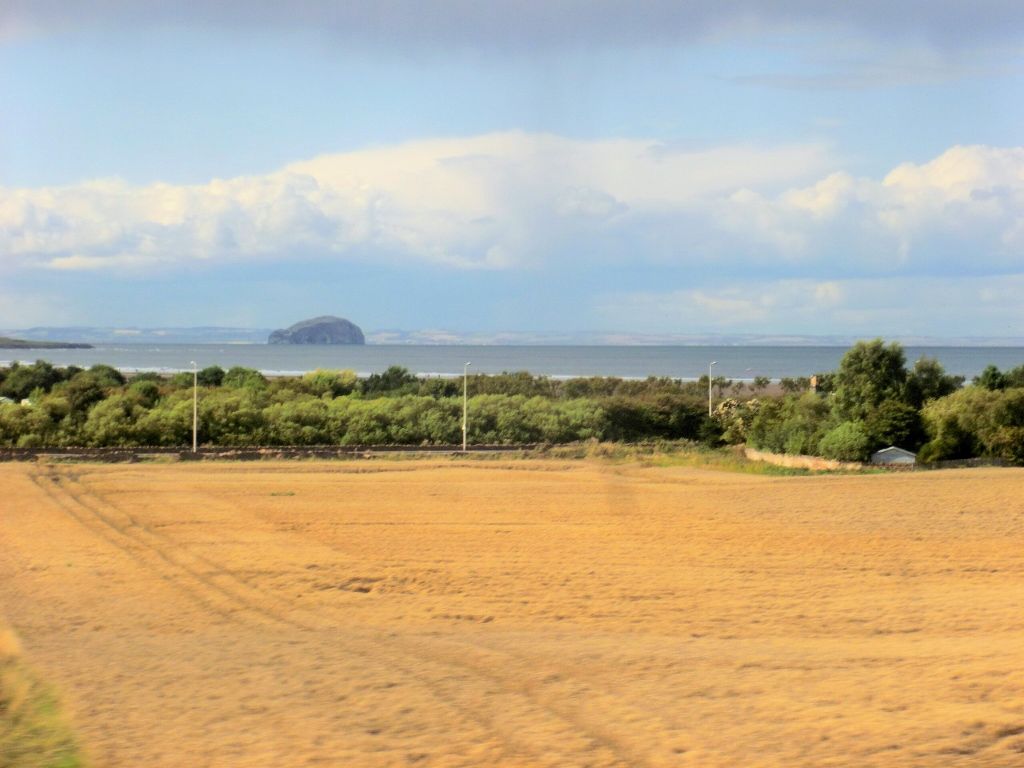 Around 15 mins after departing from Edinburgh Waverly station, the train will travel over the stupendous Forth Bridge as soon as it has travelled through Dalmeny station, four stations after the train has departed from Edinburgh.

The journey across the bridge will take nearly a minute and these views above and below were taken looking east towards the North Sea, but looking west the view is dominated by the Forth Road Bridge and the Queensferry Crossing.

Between Inverkeithing and Burntisland heading north there are distant views of the Forth Bridge, particularly from a backwards facing seat on a train heading north, though the reflections are inevitable when trying to take a picture of the view.

Between Burntisland and Kirkcaldy the railway line is right by the north shore of the Firth of Forth and on the horizon is the distant view of the south shore, which the train was travelling by an hour earlier.

Then the railway line passes through Kinghorn.

Shortly after departure from Leuchars station the train will cross the Tay Bridge (Britain's longest railway bridge) as it approaches Dundee.
As can be seen, on a clear day, the views from this bridge stretch for miles; this is the view of the south shore when looking east on the right hand side of the train. 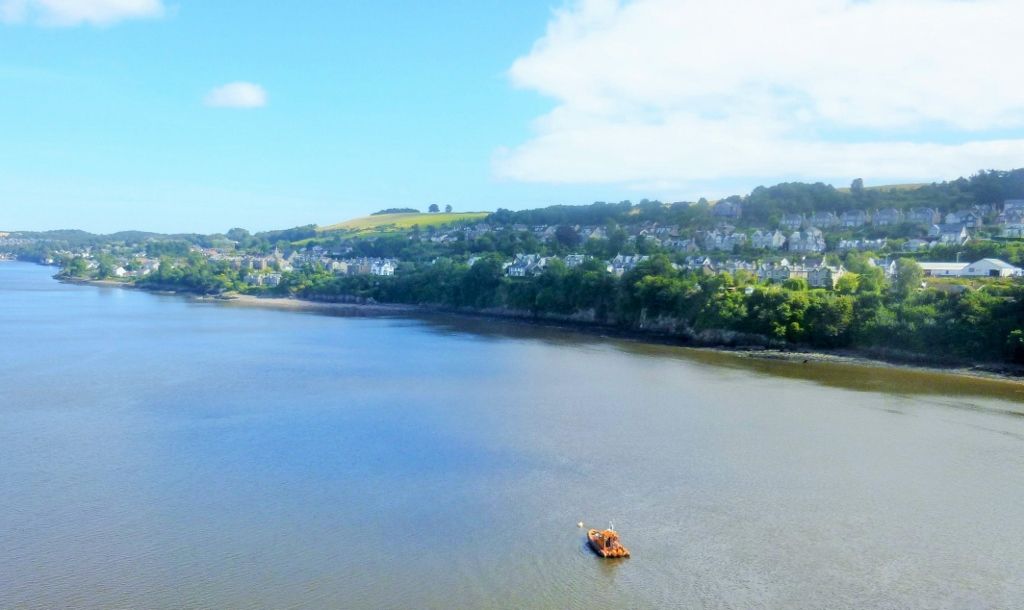 And this is the view looking west down river.

From a seat facing backwards on trains travelling north they are some wonderful views looking back towards the Tay Bridge.

The coastal views continue after Dundee, with the views either side of Montrose station being particularly delightful.