By Simon Harper
| over 1 year ago
HelpFranceEurostarStationsParis

If you want to opt to make the transfer between the Gare Du Nord and the Gare De Lyon by public transport, taking the RER train is the best option.

The four positives are:
(1) It’s comparatively fast - it’s a two station hop on Ligne D (Sud), so you SHOULD be the concourse at Gare De Lyon, within 25 mins of entering the RER statiion at the Gare Du Nord.
(2)The line D platforms at the Gare Du Nord and Gare De Lyon stations have both been brightened up; and numerous staff can usually be found on the platforms at Gare Du Nord, so the station has lost much of what had been a somewhat intimidating atmosphere.
(3) It's cheap, a single central zone metro ticket can also be used on the RER.
(4) It's generally reliable, you won’t have to wait more than 10 minutes for a train and delays are very rare.

From arriving by Eurostar at the Gare Du Nord to departing by TGV/Lyria train from the Gare De Lyon.

The access from the Eurostar arrivals to the main concourse at Gare Du Nord is all on one level; the exits from the voies (platforms/tracks) will be steps away from the front of the trains.
When you reach the concourse turn to the left.
Though what you won’t see anywhere at the Gare Du Nord are ‘this way to the Gare De Lyon’ signs.

The entrance to the RER station is towards the far left of the concourse (pictured below), follow the signs pointing the way to RER lines B and D. 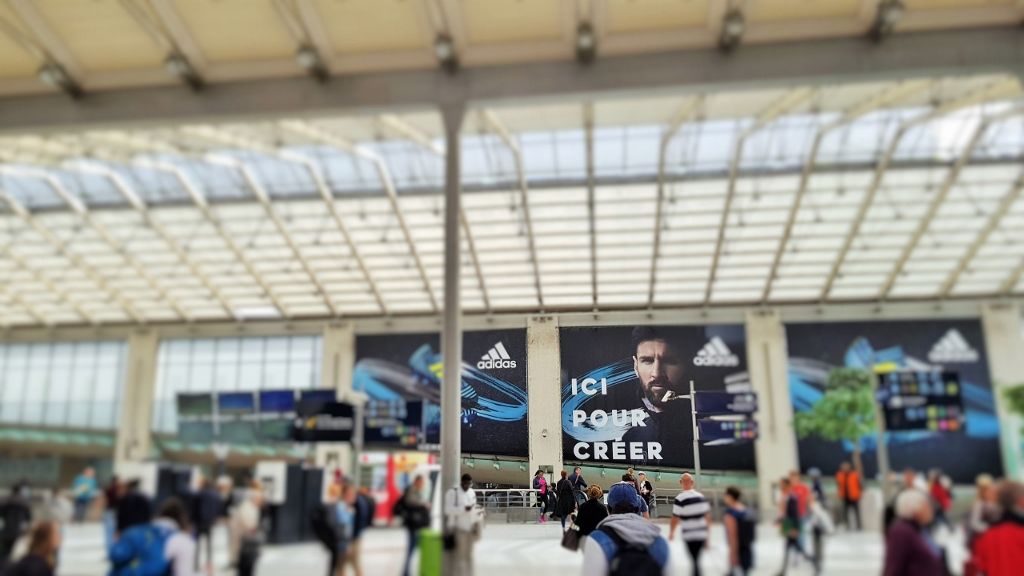 You will be looking for the escalators DOWN into the RER concourse
(There are also (less visible) lifts down to the RER ticket hall – which you’ll see below you.)
This image below has been taken from the top of this escalator. 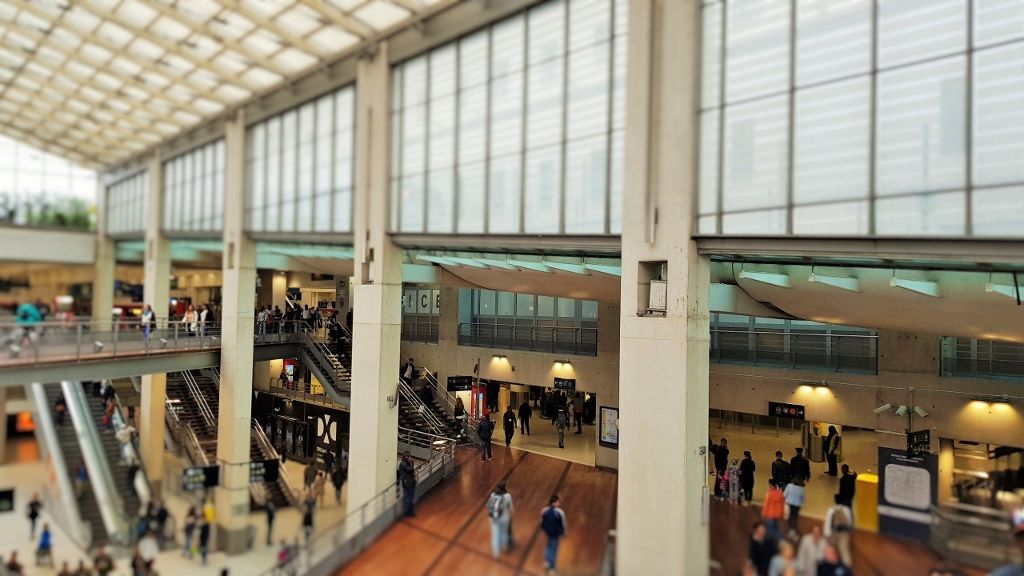 When you reach the foot of the escalator, walk ahead of you into the RER station, the ticket machines and counters for the line D (and B) trains will then be over to the left; the access down to the trains is on the other side of the ticket machines.

Buy a single journey central zone metro ticket; there aren’t any specific RER tickets for the central zone.
(Your end-to-end train journey tickets will NOT include the RER).

Either use the machines (there are large numbers of them and they have good English translation), or use the staffed ticket counter; though these can be closed in the afternoon/evenings.
Though there are so many ticket machines available that the queues for the ticket counters can be comparatively short.

From the RER concourse follow the signs for ‘Ligne D (Sud)’ (the green sign pictured below), ALL of the Line D trains heading in this direction will call at Gare De Lyon. 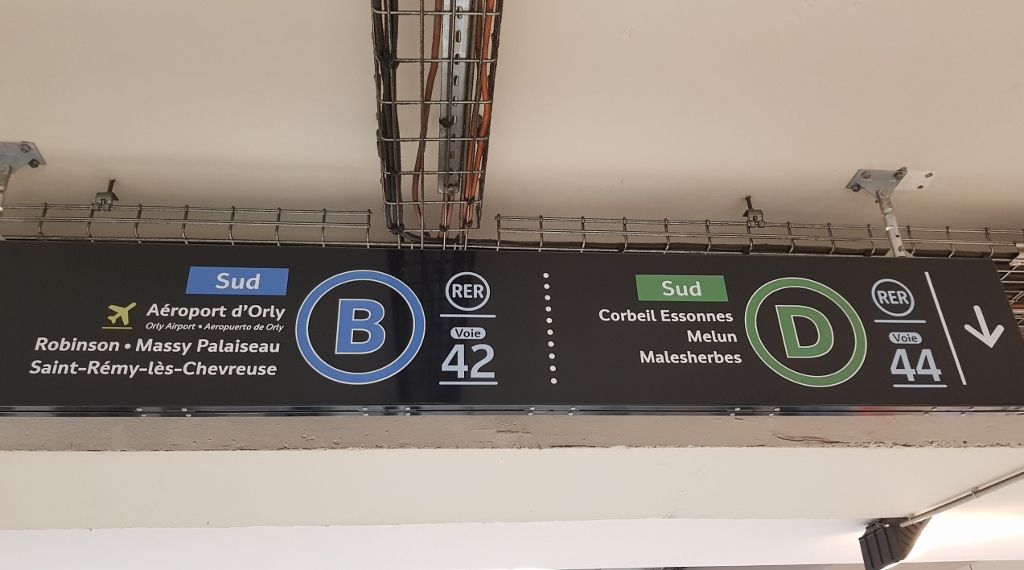 It’s important to use the ‘Ligne D (Sud)’ ticket gates as there are separate/different ticket barriers for trains heading in the opposite direction (Nord).
If you have luggage, use the lift/elevator on the other side of the ticket gates; there are stairs, but no escalators DOWN to the platform.

The platform is shared by Line B (Sud) and Line D (Sud) trains, the line B trains use the track towards the wall, while the line D trains use the track towards the middle, facing the northbound trains.
All Line D trains heading south from the Sud platform will call at the Gare De Lyon which is two station calls from Gare Du Nord, so don't worry about the final destination of the train.

Though check the electronic departure screens on the voie/platform to double check that you will be boarding a Line D train; or confirm it with the SNCF staff that are usually on the platform.

The train will be double deck, but don’t bother with finding a seat, as the travel time is only around 7–8 mins.
It’s easier to wait in the fairly large area just inside by the doors, though allow room for people to alight and board at the intermediate station, Châtelet–Les Halles.

At Gare De Lyon there are escalators (and somewhat hidden lifts/elevators) up to the level above (-2) which houses the exits from the RER.
You usually don’t need to use ticket barriers to exit the RER, so it may not be particularly obvious that you've exited the RER station.

This Level-2 also houses the entrances to the RER for travellers heading in the opposite direction, so take no notice of the fact that other people will be taking a different route.

7. Heading to your onward train:

When you have exited the RER station look for the ‘electronic departure indicators (TV screens) that are marked ‘Grande Lignes' – only these indicators list the long distance departures.
Follow the signs to the 'Grande Lignes' trains... 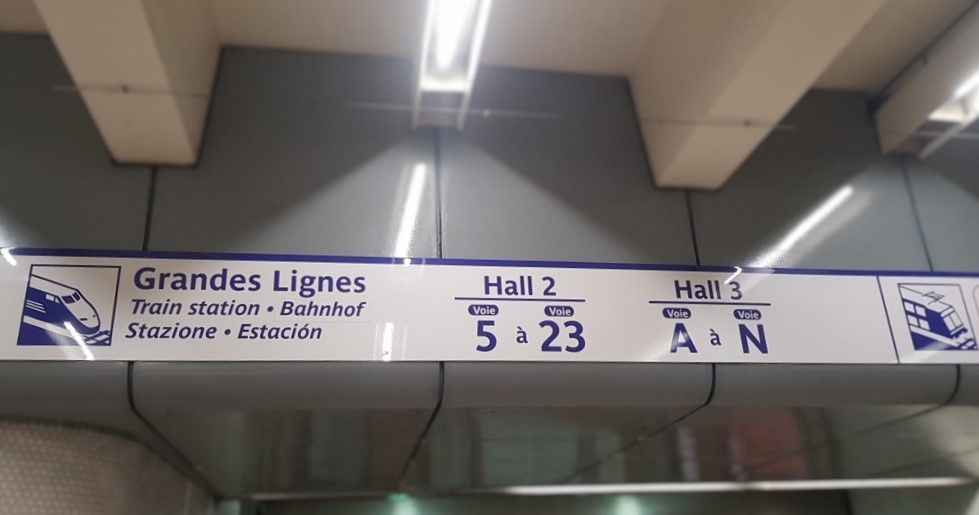 ...and you will be in Departure Hall 3; the sign above is somewhat confusing as you need to pass through Hall 3 in order to access Hall 2.

Hall 3 is pictured below. 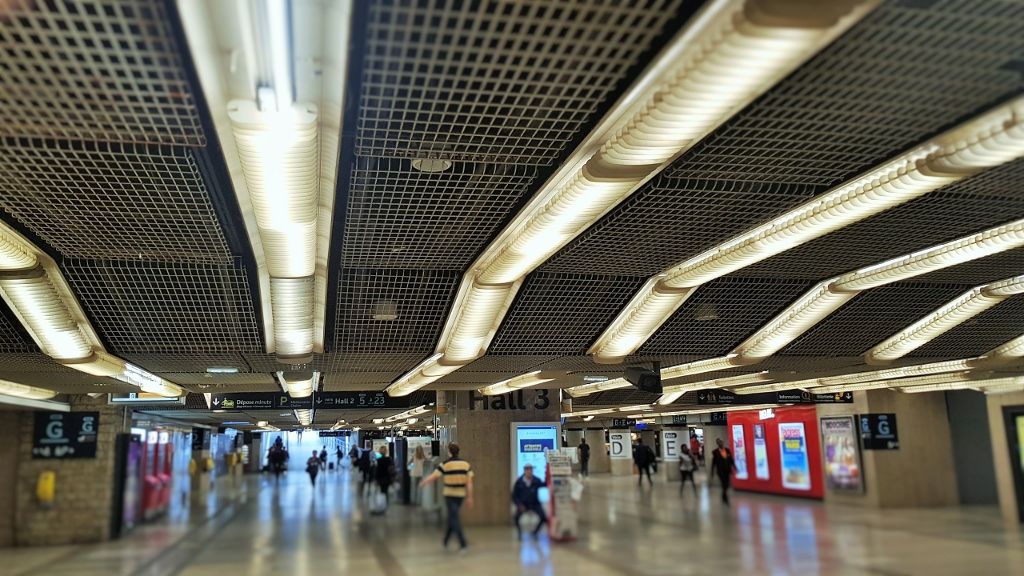 Look for the blue departure screens. 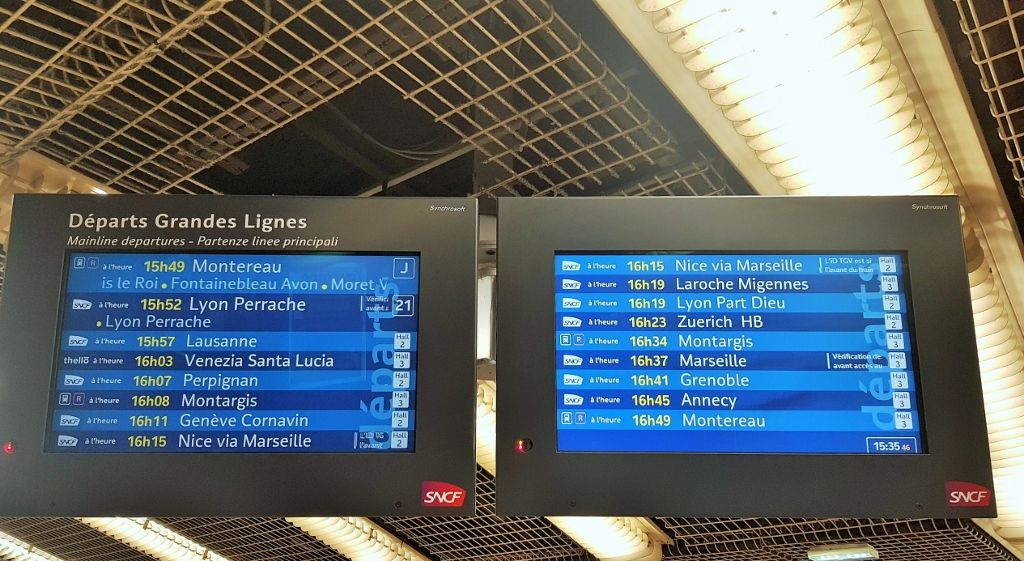 The specific platform/track/voie that a TGV or Lyria train will be departing from isn’t usually confirmed until around 10-20 mins prior to departure.

As will be seen above, prior to the specific platform (track/voie) being confirmed, you will be instructed to wait for your train in Hall 2 or Hall 3.
In Hall 3 there is a dedicated waiting area, find it at the far end, over to the right.

The 'reception' for Ouigo services is also in Hall 3.

If you won't be taking a Ouigo service, you don't have to wait in Hall 3, as it's a comparatively sparse location in which to wait for a train.
So if you have more than 45 mins to wait for a train, an option is to make your way to Departure Hall 1, which is the main concourse at the city end of the station, and wait for your train there.
You can then board the train from this Hall 1 concourse. 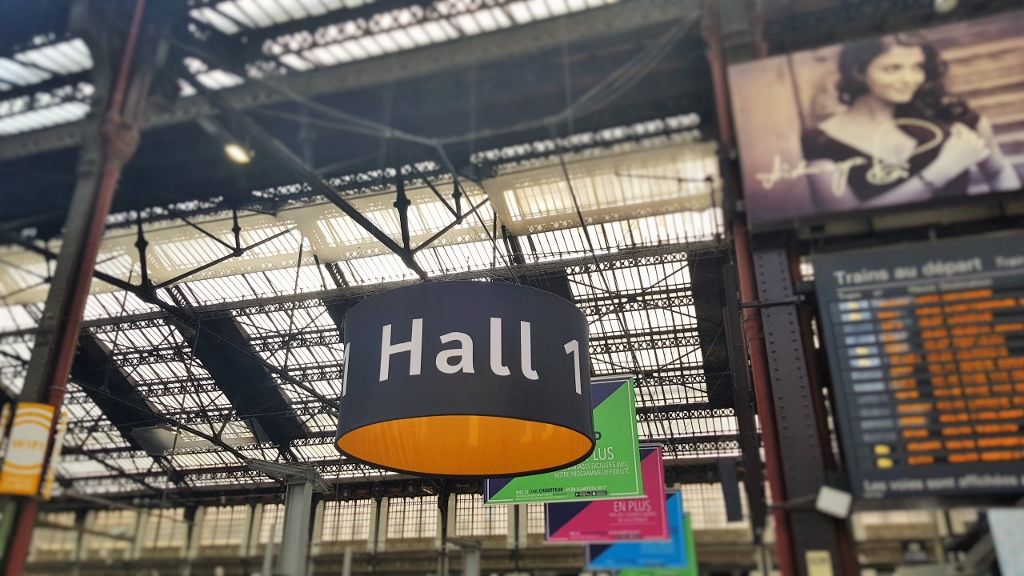 If your train is leaving from Hall 2, the easiest option is to be led by the info on the departure screens and wait there until the specific voie (platform/track) of your departure has been confirmed.
There's little point in heading over to Hall 1 as you will then have to head back to Hall 2 in order to board the train.
Hall 2 is pictured below. 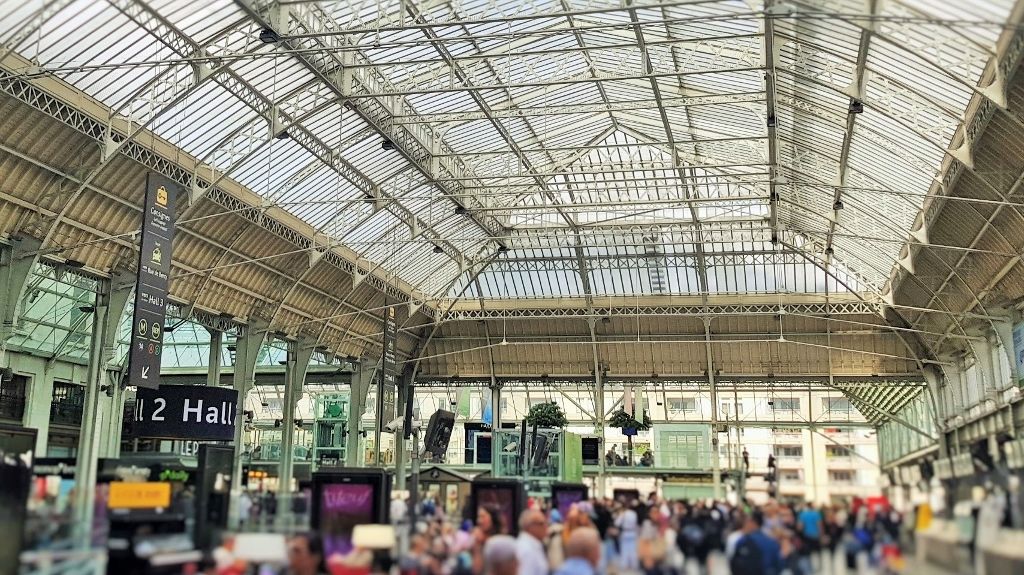 Hall 2 is usually very busy, it's not big enough to cope with the number of trains which use it.
So try to find a quiet spot from where you can keep an eye on the departure screens, because the voie (platform/track) that your train will be leaving from won't be announced.

If you don't have luggage, so won't need to make use of the limited luggage space on the TGV trains, hang back and avoid the inevitable stampede towards the train; your seat(s) will be reserved, so you don't have to rush to claim it.