If you will be taking an ICE, Thalys or Belgian train from Bruxelles-Midi station, this guide will help you find your way to your departure

By Simon Harper
| over 1 year ago
HelpBelgiumStations

Bruxelles-Midi/Brussel Zuid is a large sprawling complex of a a station, so finding your way to a departing train can be comparatively tricky, particularly as the access to the trains is from beneath the railway lines.
Meaning you can't see the trains, so have to rely on the signage within the station, which is why this guide to departing by train from Bruxelles-Midi/Brussel Zuid should be a big help.

What can also add to the confusion is that Bruexlles-Midi/Brussels South is in effect three stations in one:
(1) The platforms (tracks/voies) used by the regular trains, including those to and from other destinations in Belgium.
(2) The platforms (tracks/voies) used by the other international high speed trains.
(3)The Eurostar terminal.
As the Eurostar trains require check-in, they have a dedicated Channel Terminal within the station - hence this separate GUIDE to departing from Bruxelles-Midi by Eurostar.

The electronic train departure information switches between French and Dutch, so take your time if you're initially confused - the names of the destinations of the trains will change.

There are THREE ways in which to confirm when your train will be departing and from which platform (track/voie/spoor) it will be leaving from.

(1) Using the main departure board in the le 'Couloir Principal/ Hoofdgang' passage way: 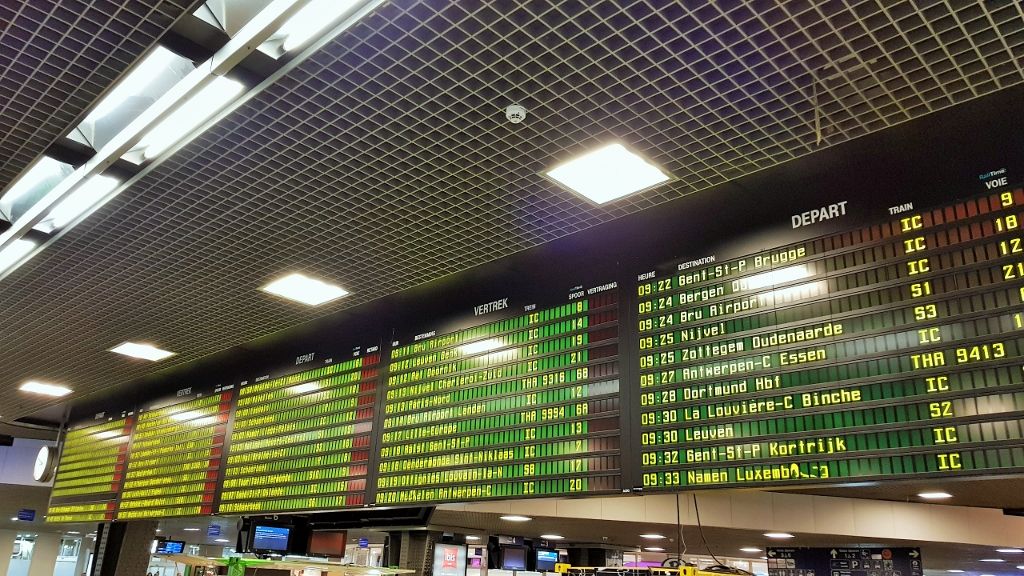 All departures are listed in sequential order from left to right.
The voie/spoor (platform/track) that your train will be leaving from is listed in the column with a header named 'spoor' OR 'voie.

Note that that only the key stations which each train is calling at are shown.
For example the 09:28 departure to Dortmund will actually also be calling at Aachen, Koln/Cologne and Dusseldorf. 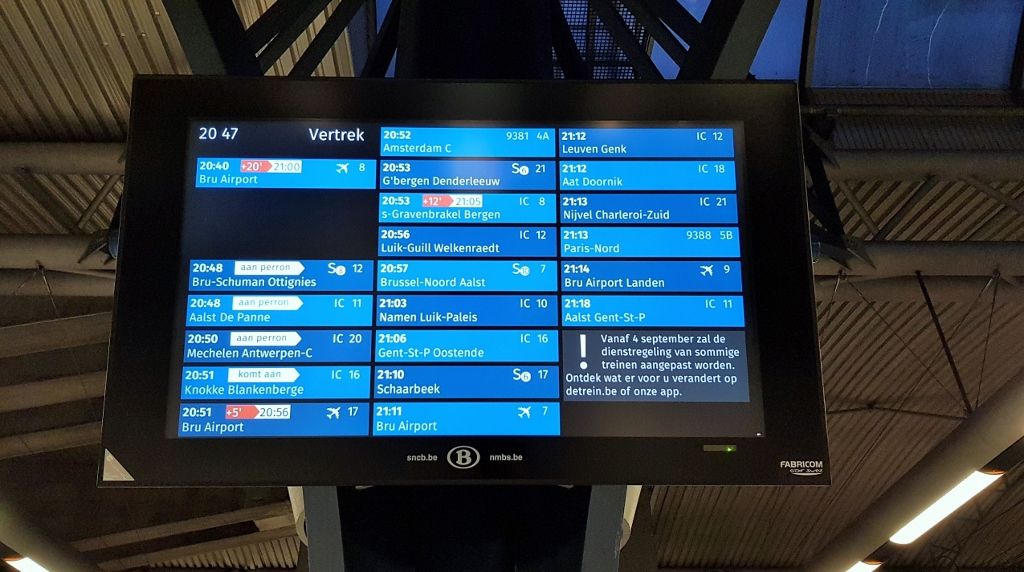 You will see these screens around the station including on the Voies/sporen/platforms/tracks that the high speed trains arrive at.
The number of the voie/spoor (platform/track) that each train will be leaving from is the number on the far right of each column ('aan perron' on the white arrow, means that the train has already arrived in the station)
You can see above that the departures at 20:52 heading to Amsterdam and at 21:13 heading to Paris have specific train number, to the left of the voie/spoor (platform/track) , because they are Thalys services. 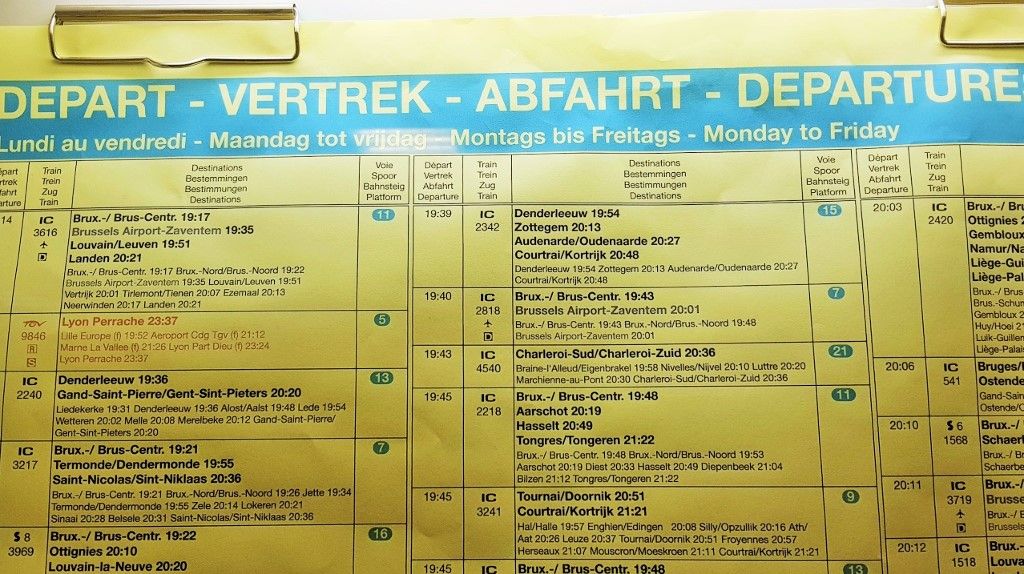 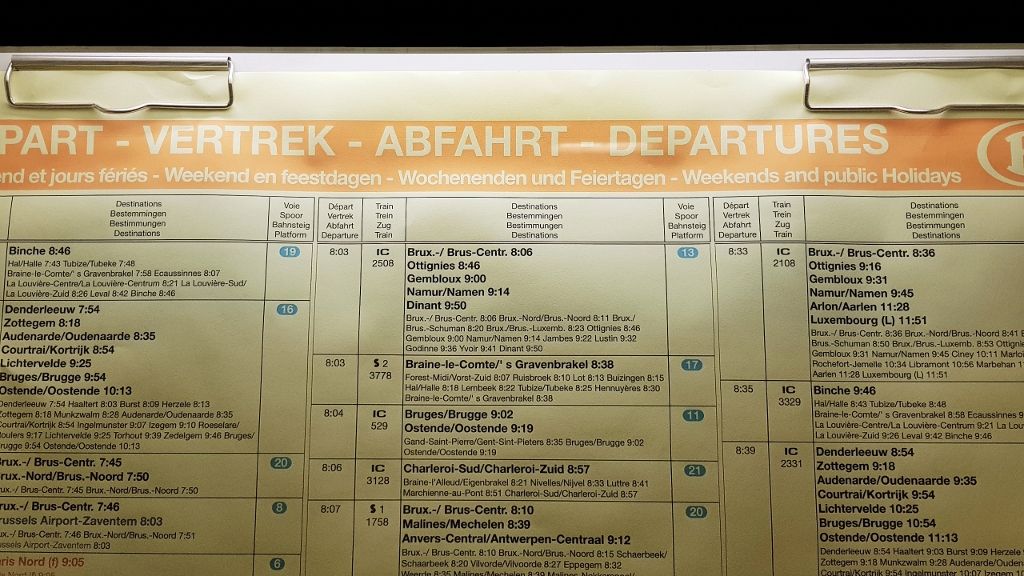 So take care not to confuse the two.

They can be particularly useful for working out all the stations that each IC train departure is calling at.
For example you could be heading to Gent at 08:04 on a weekend.
The electronic departure displays at the station will show that this train is heading to Ostende/Oostende and will call at Bruges/Brugge.
But the paper departure sheets show that this train is ALSO calling at Gand-Saint-Pierre/Gent-Sint-Pieters station and SHOULD* be departing from voie/spoor/platform/track 11.

If you will departing from Bruxelles-Midi station on any high speed train other than the Eurostar, it's a good idea to keep these three things in mind:

(1) Security checks have been introduced when accessing the voies/sporen (platforms/tracks) 3-6 that the Thalys, TGV and ICE trains usually depart from.
So aim to be at Bruxelles Midi/Brussel Zuid a minimum of 15 mins prior to departure if you will be taking one of these trains.
It is your responsibility to allow sufficient time to have passed through these checks, trains will depart on time regardless of whether all passengers have passed through the checks.

If you arrive by Metro, then when you have ascended and entered into the station, this international departure area is ahead and slightly over to the right.
Look out for the purple windows of the SNCB International Ticket office.

(3) Voies/sporen (platforms/tracks 3-6) are divided into A and B sections. The trains will therefore leave from a specific section 3A, 4B etc.
The 'A' sections are to the north, towards the city centre.
The ICE trains almost always use the 'A' sections and the TGVs normally use the B zones.
However, some Thalys trains join or separate at Bruxelles-Midi, so Thalys heading to Paris can occupy both zones; and the part of the train, in which your seat is located, may be the second part of the train to arrive.

Taking the other regular trains:

Trains to destinations in Belgium and the InterCity trains to Luxembourg and The Netherlands depart from voies/sporen (platforms/tracks) 7 – 22.

You don't have to use the stairs/escalators to access voies/sporen/platforms/tracks 7 - 22, but the lifts are somewhat hidden out of sight on the far left* of the main passage way (on the other side of a retail arcade).
*When facing away from the main station entrance on Place Victor Horta (so over to the right if you have used the Avenue Fosny entrance). 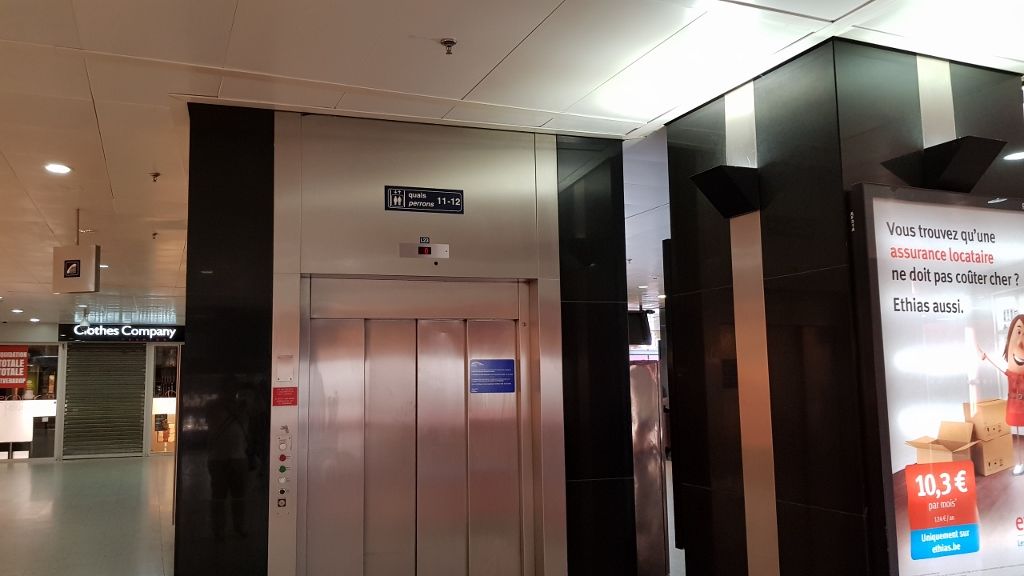 Note that the numbers of the specific platforms/tracks that each lift will give access to are shown above the doors.

Using the departure info that you will find on the voies (platforms/tracks) at Bruxelles-Midi / Brussel Zuid:

When looking at the electronic train departure information on the voie/spoor (platform/track), be aware that the train destination information will be multi-lingual.
The train shown below is heading to Liege via Namur, but 'Luik' is the Dutch name for Liege 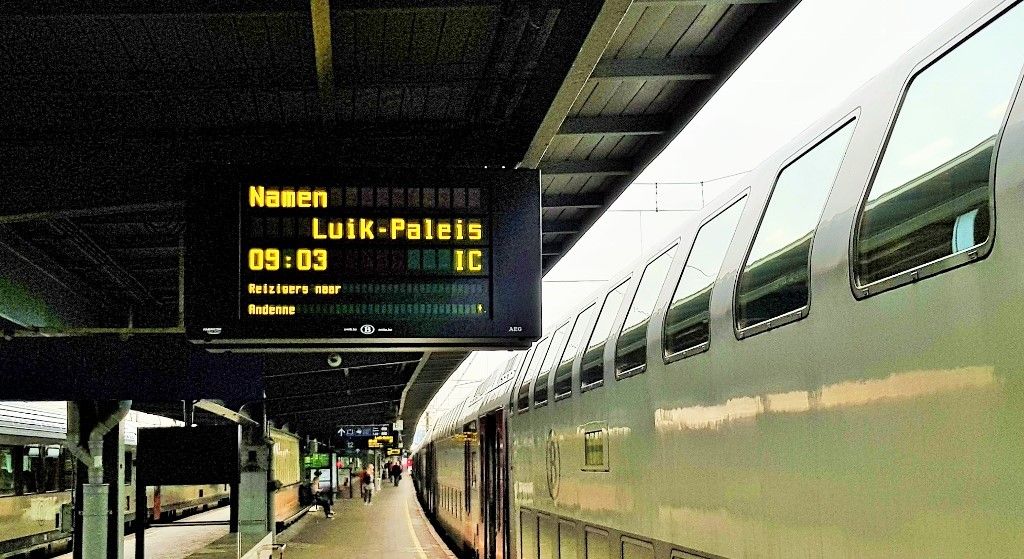 The information on the indicator will refresh and switch between languages, so be patient and don't assume that the train isn't heading to your destination because you can't see on the indicator when you first look at it

These voies/sporen (platforms/tracks) 7 - 22 are not zoned, so in practice people tend to gather in the middle of the platform by the departure screens.
It's a good idea to initially do this, so that you can keep an eye on the electronic indicator as only the details of the next train to depart will be shown.