Taking day trips from a beautiful location can simplify seeing the best of Wales by train - hence these ideas for making multiple stunning journeys from Bangor, Llandudno and Machynlleth.

Taking time out to relax on the charming Welsh coast will be time well spent, but what makes these suggested locations in Wales extra special is the opportunities they offer to do something other than spending the time on the beach.
Because what sets Wales apart is its history, stunning landscapes and the plethora of steam railways, and what’s been singled out on this guide is how each of them can be accessed by public transport – you don’t need a car to see the best of Wales. 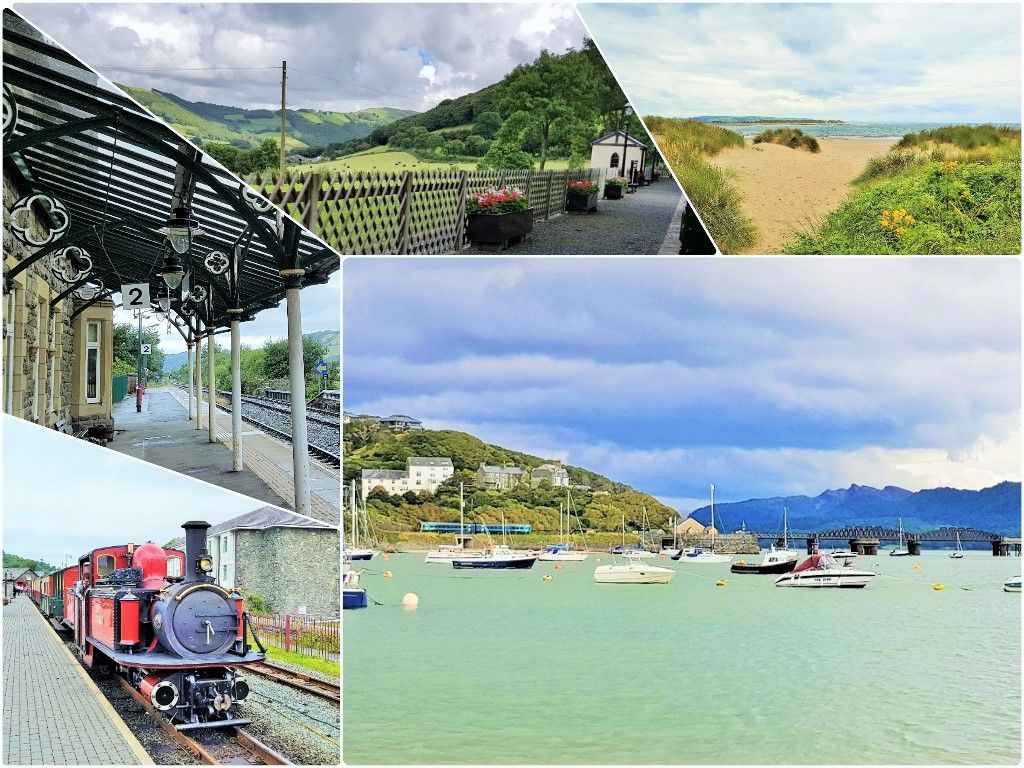 If you base your Welsh holiday in one location you can avoid making multiple transfers to the overnight accommodation required when touring around Wales by train.

You also won't have to have your luggage with you on the train journeys meaning that you can travel light, plus you can also react to the weather.
You can also be spontaneous and book last minute tickets at the station, because using an Explore Wales pass won't save you money.

If you want to explore both north and mid Wales basing yourself in the charming city of Bangor is a good choice.
It is served by direct trains from Birmingham, Cardiff and London and has easy connections from Liverpool and Manchester.

Bangor is a particularly good option if you want to include seeing the most spectacular parts of Snowdonia by public transport as part of your holiday experience.

A great base for riding the Great Little Trains of Wales

If you want to take rides on the Ffestiniog, Snowdon AND Welsh Highland Railways on one holiday and want to access them all by public transport, then Bangor is particularly convenient.
That’s because it has direct bus routes to the starting points of all three railways in Caernarfon, Llanberis and Porthmadog.
(In contrast there are no direct bus services between Porthmadog and Llanberis, which tips the balance in favour of Bangor).

Four ideas for accessing the steam railways from Bangor

1 - The village of Llanberis is the starting point of two of the ‘Great Little Trains Of Wales’ which are located in the Snowdonia National Park and they can be accessed by direct buses from Bangor.
Route/line S1 can take you from Bangor to both the Snowdon Mountain Railway and the Llanberis Lake Railway - so they can be easily combined on one day trip.

2 - Take the train from Bangor to Llandudno Junction, changing trains there for a journey on the beautiful Conwy Valley Railway to Blaenau Ffestiniog and then connecting there for a trip on the Ffestiniog Railway. 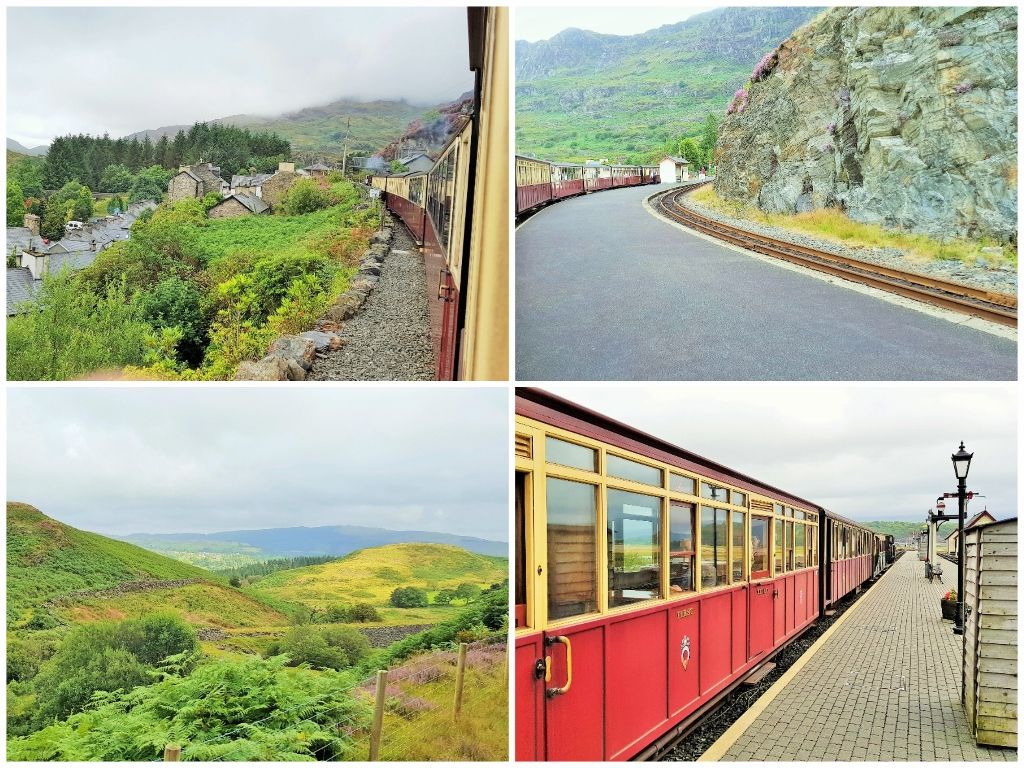 3 - Or another means of accessing the Ffestiniog Railway from Bangor is to take bus route/line T2 to Porthmadog, which is at the other end of the line.

4 - Take the frequent 5C bus route/line from Bangor to Caernarfon in order to connect for a journey on the West Highland Railway.

Though it isn’t possible to take make a return journey in a day from Caernarfon to Blaenau Ffestiniog on a combination of the Welsh Highland and Ffestiniog Railways, so if you want to travel the length of both of these beautiful railways, you will have to visit them separately.

Bangor is also a great base location for seeing the Castles and Town Walls of Gwynned which are so spectacular that they are a UNESCO World Heritage Site.

1 - Caernarfon Castle is in the town centre, so it can be easily accessed when taking the frequent bus route/line 5C from Bangor - and it is only a five minute walk from the station that the Welsh Highland Trains depart from.

2 - Beaumaris Castle is an easy journey from Bangor on bus line/route 58.

3 - You can travel on to the delightful seaside resort town of Barmouth by taking a combination of the T2 bus to Porthmadog and then by train from there on the delightful, Cambrian Coast Line – the sea views will be on the right. 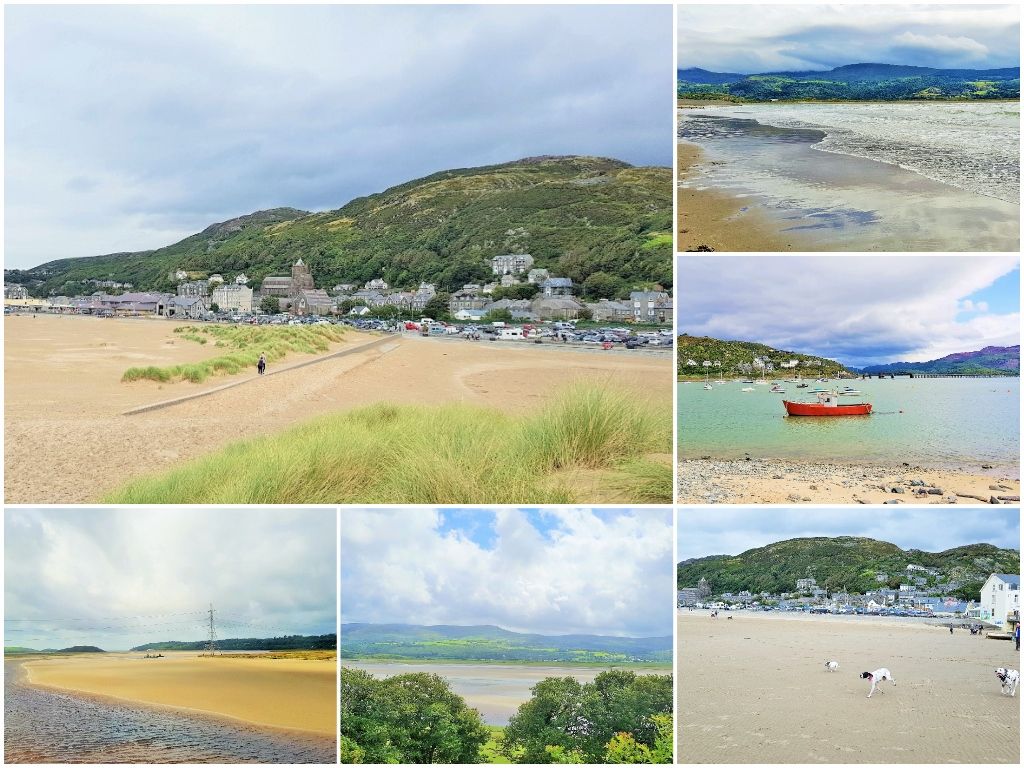 The trains heading to Barmouth also call at Harlech station, which has easy access to Harlech Castle, though the walking route between them is very steep.

4 - Take a train from Bangor direct to Conwy in order to explore the fortified town and its castle and you will be travelling along the North Wales Coast Line, sit on the left when heading east for the wonderful sea views

Llandudno and Conwy can be easily be combined on the one day travel day, as there are direct trains between them.
Then when you’re in charming Llandudno you can take a ride on the Great Orme Tramway.

Lovely Llandudno is the premier resort town on the North Wales Coast, so it offers a wide choice of accommodation and it is also a good base for exploring the best of North Wales by train.

Llandudno also has direct trains from Birmingham and Manchester and easy connections via Llandudno Junction station with trains from Cardiff and London.

From Llandudno you can take these three wonderful day trips:

1 - A trip to Porthmadog, using a combination of the beautiful Conwy Valley Railway and the enchanting Ffestiniog Railway - making a simple as can be connection at Blaenau Ffestiniog station.

Heading to Mount Snowdon from Llandudno

2 - It’s possible to access the Snowdon Mountain Railway and/or the Llanberis Lake Railway by public transport on a day trip from Llandudno.

The most scenic option in the summer, available April to October is to take the Conwy Valley Railway to lovely Betws-Y-Coed (which is also the location of the charming Conwy Railway Museum) then from there you can take the Snowdon Sherpa bus route S2 on to Llanberis.
Or year round you can take a train to Bangor and then connect there into bus route/line S1 to Llanberis.

A journey on the Welsh Highland Railway

3 - The trip to lovely Caernarfon and its fabulous castle involves a combination of a train ride to Bangor (with an easy connection at Llandudno Junction) and a journey by bus.

In Bangor the bus station is a two minute walk from the railway station, so a relatively straightforward connection will be available into the frequent 5C bus route/line which will take you on to Caernarfon

Though if you’ll you want to take a journey on the the West Highland Railway on from Caernarfon, you’ll need to target Mondays to Thursdays when its Gelert Explorer service is operating, as it departs at 11:30
You will need to take the train from Llandudno which departs at 08:46 and then connect in Llandudno Junction for Bangor; from there the bus line 5C should enable you to arrive in Caernarfon at 10:24

If you want to explore the many attractions dotted along the Cambrian Line then Machynlleth makes for a great base for taking day trips by train – it’s also a charming town as ShowMeTheJourney discovered when I holidayed there with head teacher Paul and Pear the school dog. 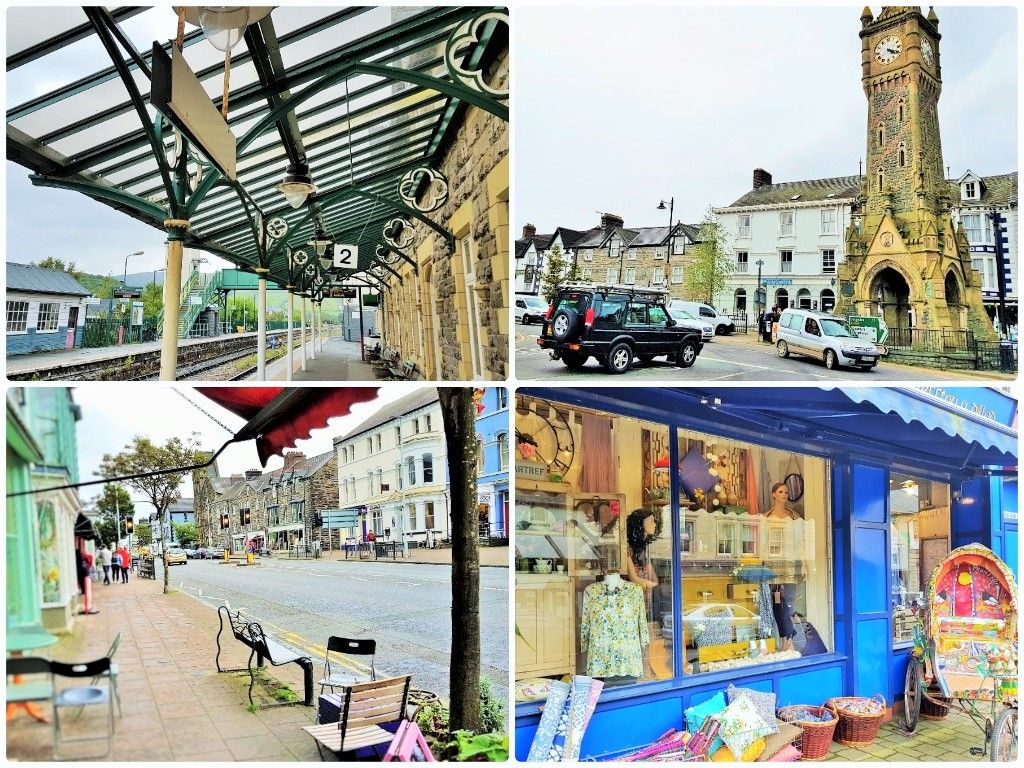 Machynlleth was chosen as a location because the Cambrian Line splits at its station, the trains head north to Phwelli via Barmouth and Porthmadog, or south to Aberystwyth.

However, there aren’t any direct trains between Aberystwyth and destinations to the north - to Barmouth and beyond.
Despite that, the necessary connections in Machynlleth or at Dovey Junction for this north <> south journey aren’t particularly convenient.

So because we wanted to head both north and south along the beautiful Cambrian Coast by train, being based in Machynlleth was a good bet.
The town also has direct trains from Birmingham and particularly straightforward connections from Cardiff, London and Manchester.

Note that due to maintenance works the railway between Machynlleth and Porthmadog via Aberdovey, Towyn, Barmouth and Minffordd is temporarily closed from September 11th until at least December 10th.

The fabulous locations which can be accessed by direct trains from Machynlleth include:

Aberystwyth and the lovely Vale of Rheidol

Lovely Aberystwyth, which is both a charming seaside resort and the home of the beautiful Vale of Rheidol Railway.
When boarding its trains in Aberystwyth, take a seat on the left-hand side for the best of the views, over the wonderful valley, from which the line takes its name. 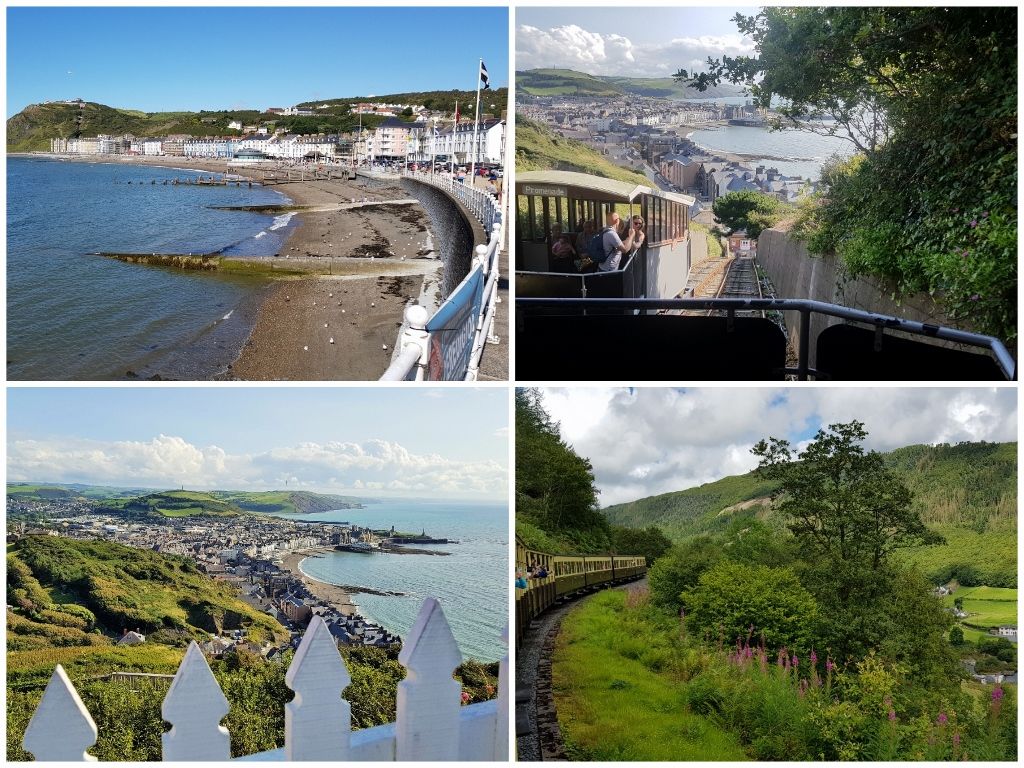 Porthmadog for the Ffestiniog and Welsh Highland Railways

Take a train to Minffordd or Porthmadog to take a journey on the Ffestiniog Railway.

At Minffordd there is a very easy connection available between the mainline trains and the Ffestiniog Railway, but in Porthmadog, the two stations are at the opposite ends of the town centre.

So it can be worth checking whether the connections in Minffordd will be convenient; though some of the most wonderful views on the Ffestiniog Railway are those which can be seen between Porthmadog and Minffordd.

And/or take the train to Porthmadog in order to connect with the West Highland Railway.
Though it isn't currently possible to set off from Machynlleth in time to make a return journey to Caernarfon, due to the reduced timetable in place for 2022.
Though on Mondays to Thursdays it's possible to set off from Machynlleth to make a return trip to Beddgelert, on the Glaslyn Venturer service.

It isn’t possible to travel the lengths of both the Ffestiniog AND Welsh Highland Railways on a single day trip from Machynlleth, so separate trips to Porthmadog will be required – which is no hardship as the train journey to Porthmadog is so fabulous.

The trains heading to Porthmadog also call at Harlech station, which has easy access to Harlech Castle, though the walking route between them is very steep.

To the Talyllyn Railway

Take the train to Towyn for a very easy connection to the Talyllyn Railway.
(I know a journey by train on this line is utterly charming because it’s frequently seen in TV programmes, but the plan to take a ride on it for ourselves was thwarted by the weather).

Days on the beach

Take a trip to lovely Barmouth – the stunning sea views will be on the left (you can also enjoy these views when heading to Porthmadog).

If the weather is fine, an idea is to leave the train at Morfa Mawddach, the station before Barmouth, so that you can use the footpath, beside the railway over the stunning Barmouth Bridge.
The most charming parts of the town are located between the bridge and the train station.

Another lovely seaside town with a great beach, that’s closer to Machynlleth is Aberdovey/Aberdyfi. 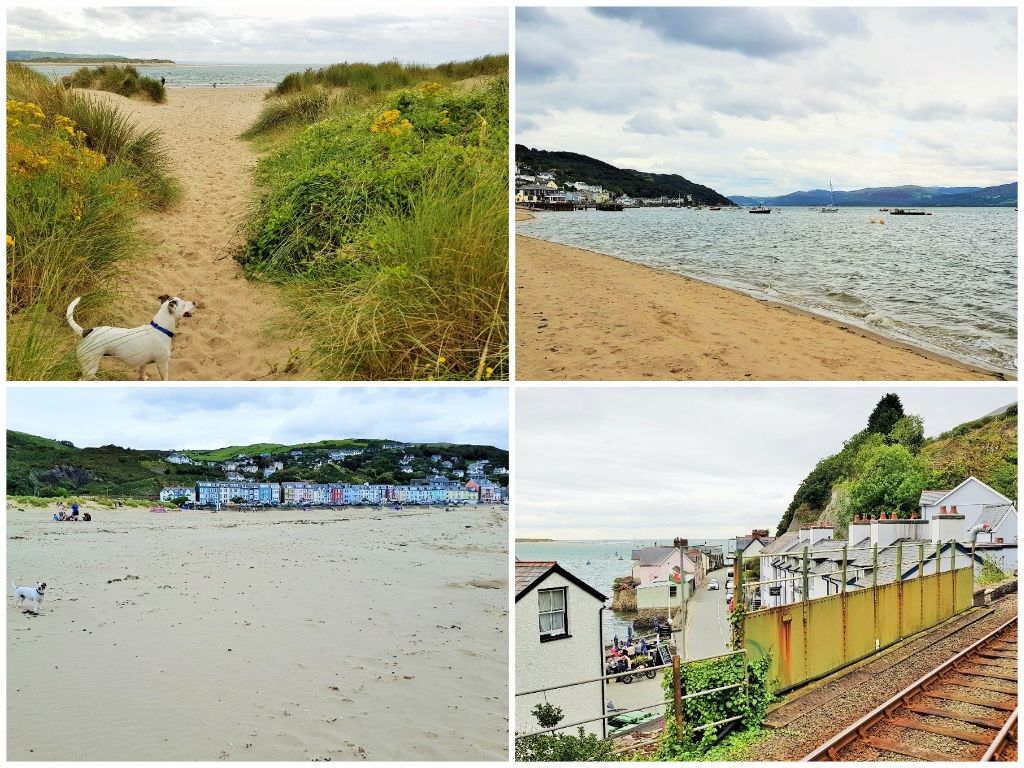 A wonderful and easy walk is to head for Penhelig station (pictured above), the next station down the line, though if you do take the train back to Machynlleth from there, you’ll need to flag it down, as it is a request stop.

Mount Snowdon can be a step too far

As can be gleaned, another plus of staying in Machynlleth is that all of these lovely locations listed above can be accessed by train and not by bus!

The easiest option involves taking bus route/line T2 on a comparatively long journey to Caernarfon in order to connect into the bus route/line 88 to Llanberis - but definitely check both the bus time and train timetables before you head off, it may not be possible to make the return trip and ride the trains in a single day.

Other easy holiday ideas by train