Seat reservations are mandatory on this train, so will automatically included when booking tickets, but rail pass users must reserve prior to boarding.

This train is solely used on daytime departures.

This train conveys a restaurant car at which both 1st and 2nd class travellers can take a seat at a table and order from a menu including hot meal options.

The train has a bar car with a counter at which hot and cold drinks, snacks, salads, sandwiches and confectionary etc can be ordered. These items can then be consumed in the bar car or taken back to your seat.

Dedicated spaces for wheelchairs are available on this train.

Attributes of the train

A conductor will be present on board the train, their role includes making announcements and responding to passenger queries.

Which country these trains operate in.

This train operates on routes within Germany

This train operates on routes within Poland

A complimentary WiFi portal is available throughout this train.

Complimentary drinks and snacks will be served, choices will include coffee, orange juice and prosecco.

A complimentary WiFi portal is available throughout this train.

Polish national rail operator PKP has plans to use its very smart ‘Pendolino’ trains, which it uses for its prestigious EIP services, on this route.

However, for the time being these Berlin-Warszawa Express trains have something of a split personality - and that’s because a mix of coaches are used for these trains.

Some are similar to those used on German IC trains , while others are older Polish IC coaches (as seen below) – that are being phased out on other Polish routes. 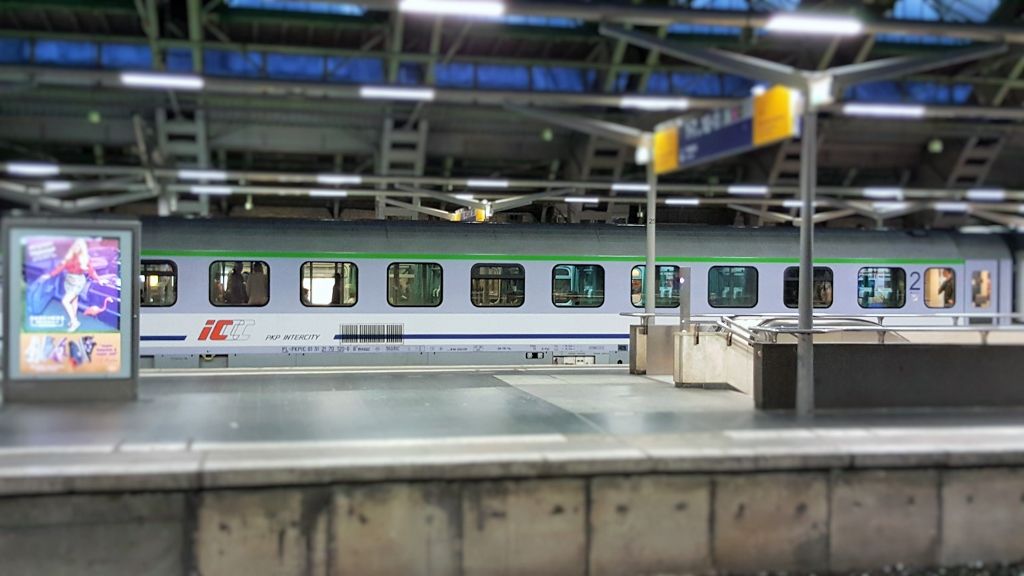 Seats will automatically be assigned when booking tickets for journeys by these trains.

Rail pass users will need to have made reservations prior to boarding, but avoid booking reservations last minute at the station, particularly if you will be travelling on a Friday or Sunday - seats can sell out in advance.

Some coaches have open plan saloon seats and others have compartments. 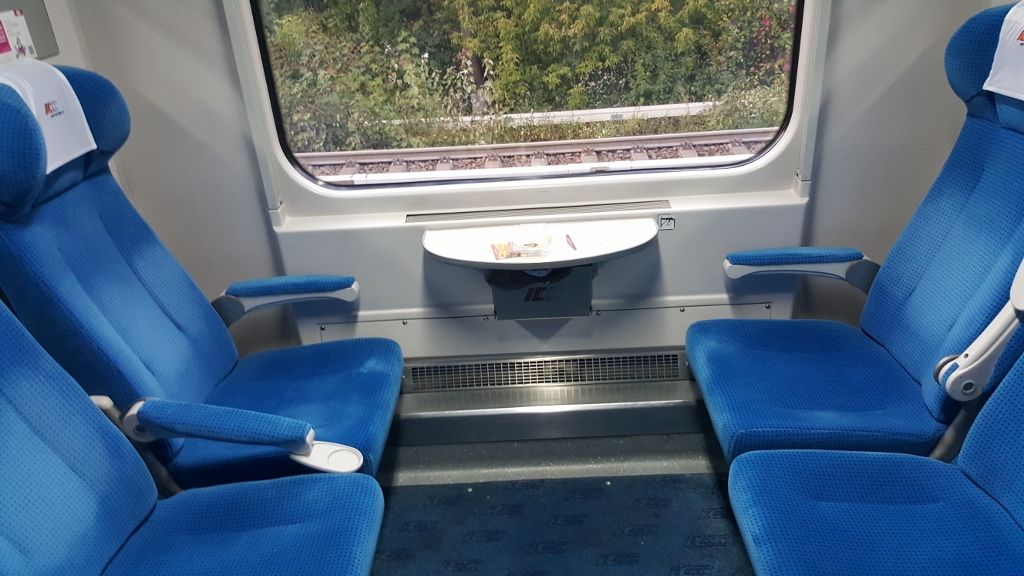 The older coaches are looking tired and as a result toilets, light switches, power-sockets and Wi-Fi can be out-of-order.
If your 1st class seat is in one of these older coaches, you’ll wonder why you are paying a premium, compared to those travelling 2nd class in one of the more modern coaches.

Though a minor benefit of being 1st class is the complimentary drink and snacks for the Polish part of the journey.
(Though they pale in comparison to the complimentary light meals served on the top tier Polish EIP trains).

Also the free Wi-Fi is seemingly a lot more reliable in Germany.

So not the smartest of European train services, and they can also be very crowded - particularly in both directions between Warszawa and Poznan.

Something else to be aware of is that the coach, in which the restaurant car is located is divided, a third of the space is used for seats at which meals aren’t served.
If possible avoid these seats if you want a quiet trip, you won’t be particularly shielded from the chatter in the restaurant seats.

Also the patrons of the restaurant car will be walking passed these seats to access the toilet - and those that haven’t lucked out on finding a seat in the restaurant car, also tend to sit on the floor or stand in this part of the coach.

These trains convey a restaurant car, which also doubles up as bar/bistro car.

Whether you will be travelling First or Second Class you can go to this car and purchase hot/drinks, snacks and sandwiches etc and then either stand at the bar to consume them or take the items back to your seat.

Because the reservable seats can sell out in advance on these trains, many travellers head to the restaurant car as soon as they board.
A lively atmosphere results from the need to constantly order drinks and snacks, in order to retain a seat at the tables.

If you can speak Polish and enjoy a card game then your journey will fly by, but otherwise don’t rely on having a meal during your trip on the busier departures, because table seats may not be available - though the meals in the restaurant car are reasonably priced.
If you do want to have a meal head to the restaurant as soon as you have claimed your seat(s).

This is one of more than 150 train guides available on ShowMeTheJourney, which will make it easier to take the train journeys you want or need to make. As always, all images were captured on trips taken by ShowMeTheJourney.