Once you're used to using Trenitalia.com, booking tickets becomes a blissfully simple 4 step process.
However, to keep those booking steps to a minimum Trenitalia packs a lot of features and information on to each stage of making a booking.
And if you're not used to booking tickets on Trenitalia's website, these additional features can be easy to miss. 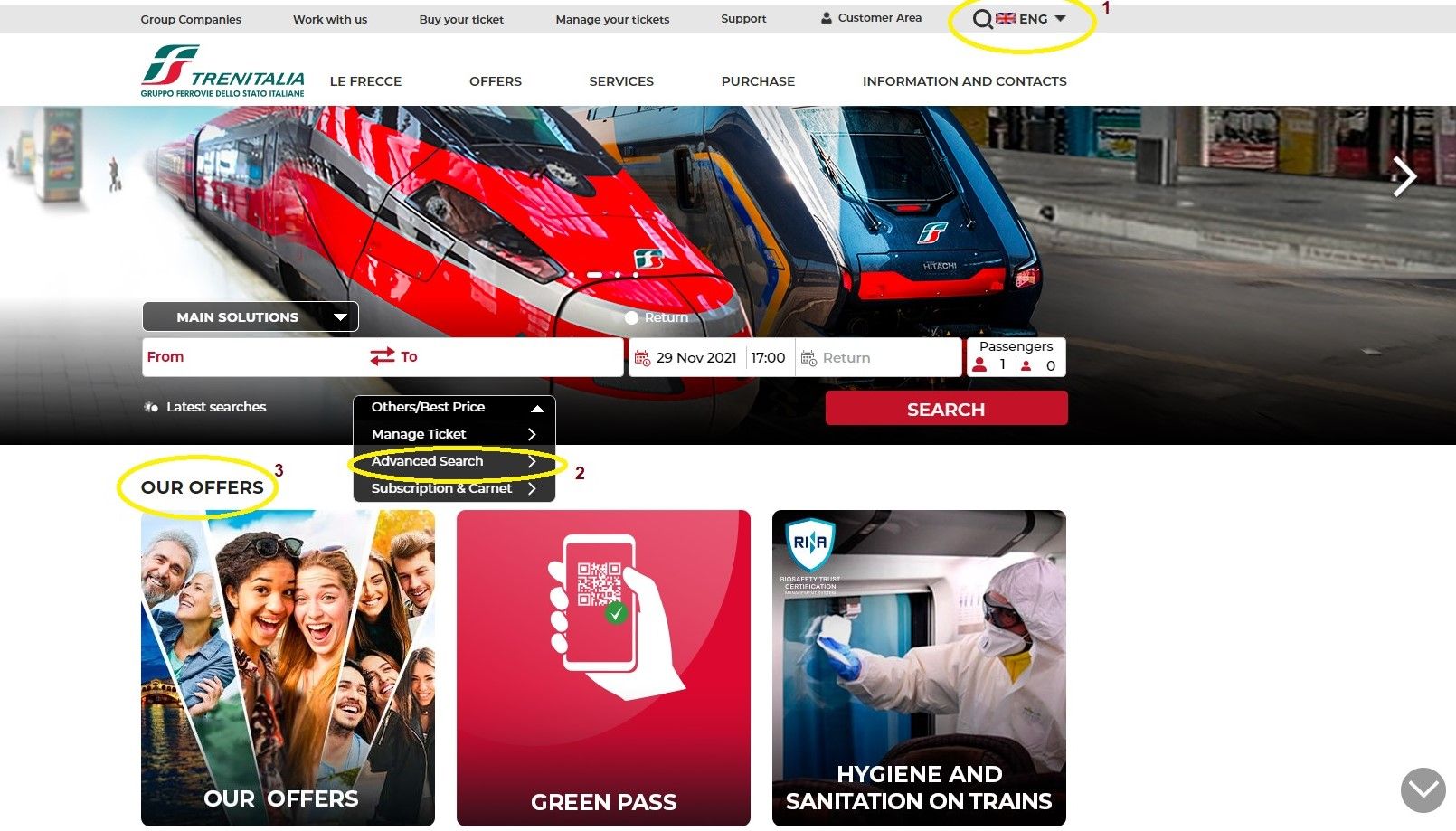 Also worth paying attention to on the home page
2. Trenitalia offers an Advance Search option (click on the 'Others/Best Price' arrow which you'll see under the 'To' station box) , which doesn't add much complexity to the booking process, but does it make it easier to find the optimum ticket (see below).
3. Before proceeding with a ticket booking it can be a good idea to check out the offers, which are a permanent feature of the Trenitalia home screen, particularly if:

Though the terms for using child tickets broadly are as follows:

The adult ticket price applies to children aged 12 and older.

The key feature you can access by selecting the Advanced Search is the ability to apply a filter, so that the journey search results you will see will only then feature direct journeys.
Though to access the other key Advanced Search features you need to click on the 'Other Search Options'; do so and you will then see... 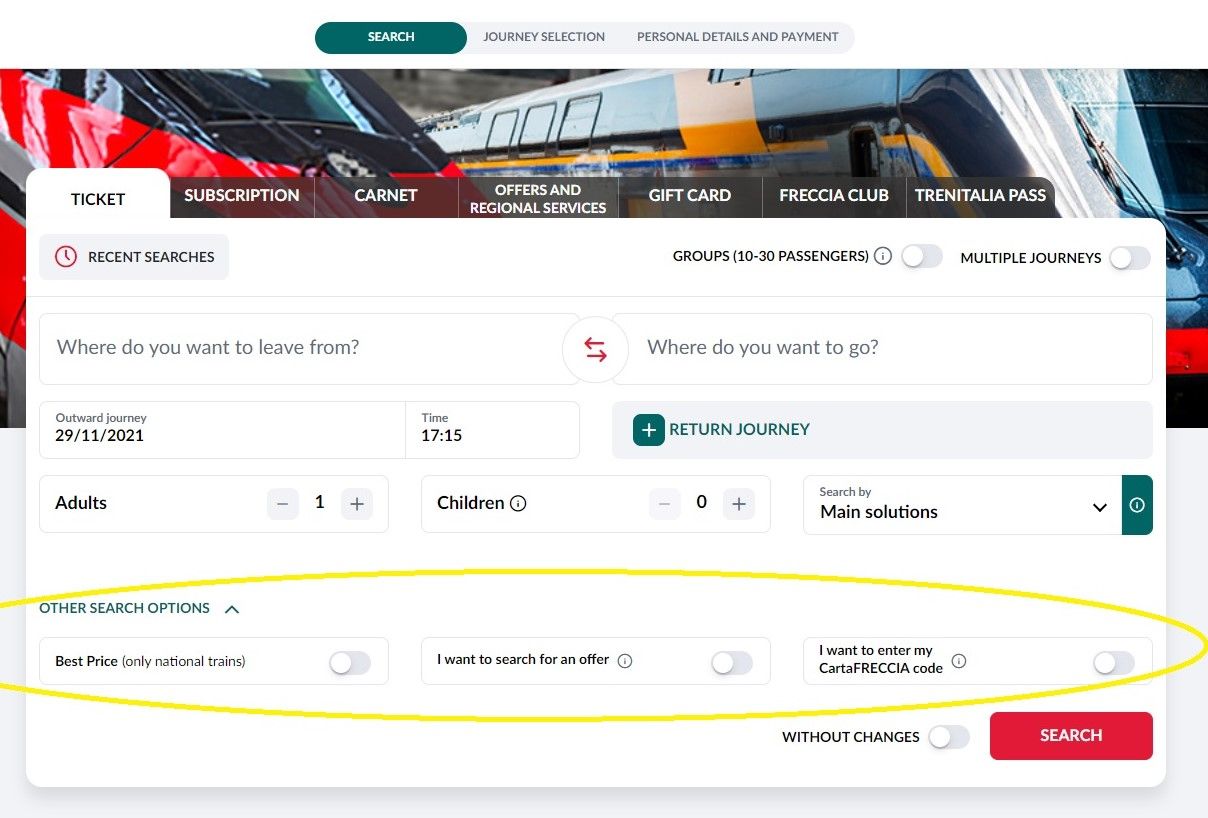 Something else worth being aware of is the slightly clumsy translation of 'Main Solutions', which in effect meansn all the types of train available on the route will be included together in the search results. 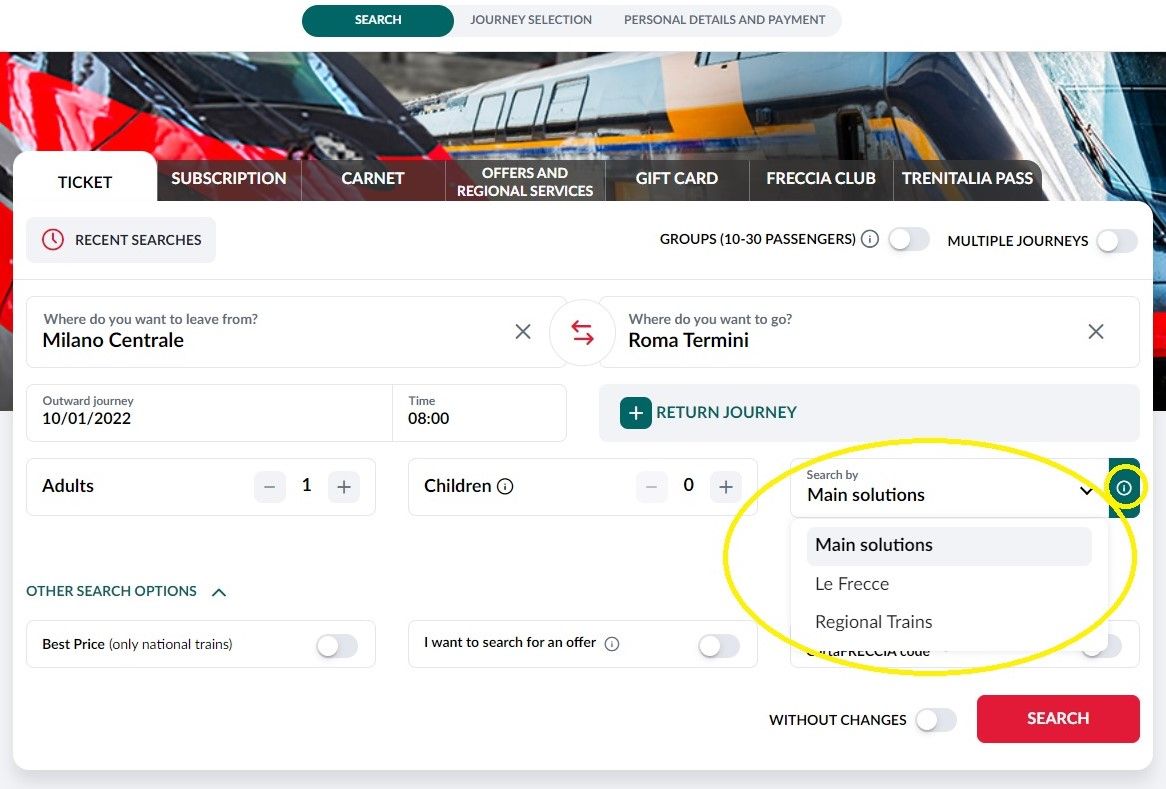 Though as can be seen, if you know that you'll want to travel on a Frecce train, regardless of price, you can be proactive and ensure that the search results will then only feature search options by this type of train.

Selecting the From & To Stations:

When using Trenitalia.com the names of the MAIN stations are:

Usually the trick is not to rush to type in the English name... 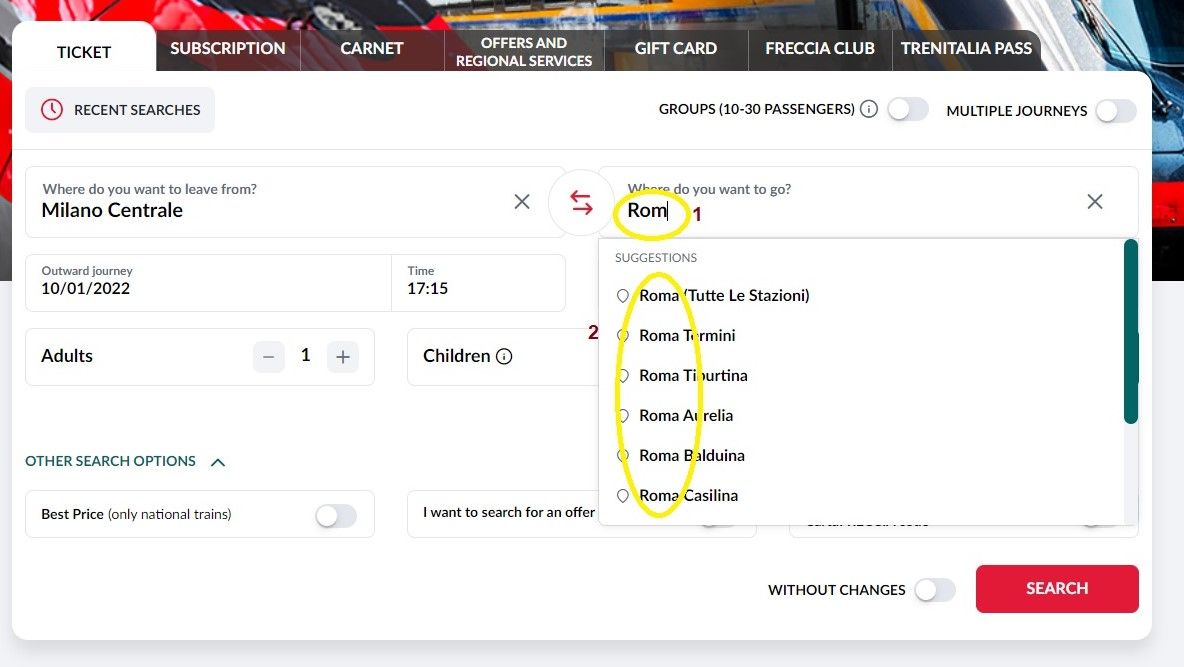 ...in this example, once 'Rom' has been entered, the stations in Roma/Rome will automatically become available to select.
However, if you were to rush at it and type 'Rome'... 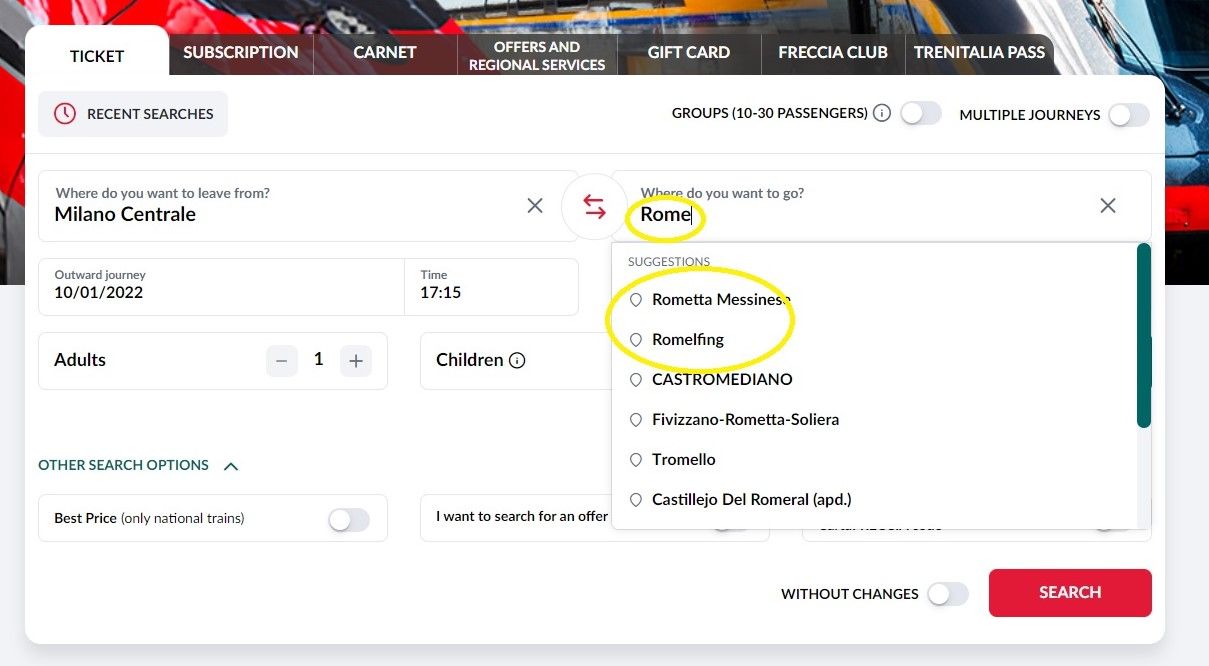 ...you wouldn't then see the main stations in the Italian capital.
Though for some locations you need to take special care to type in the Italian name; Firenze for Florence and Torino for Turin being popular examples.

The stations tend to be listed in alphabetical order in the drop down menu; so when cities have more than one station, the first station listed may not be main station.
'Centrale' is a reliable indicator that a station is the main station in the city m though as can be seen above, this is not universal.

Cities with more than one station

Genova, Firenze, Milano, Roma, Torino and Venezia are cities with more than one station used by long distance trains.
So it can be a good idea to use Google Maps to work out which stations in these cities are most convenient for your start/end location(s) - and then search for these stations on Trenitalia.

You need to book tickets between the specific stations for your ticket(s) to be valid; if you book from Venezia Mestre, your ticket won't be valid from Venezia S. Lucia etc.
Though as can be seen below, in these locations, it's possible to select the equivalent of an all the stations option, but proceed with care; in SMTJ's experience, this option typically defaults to the main station. 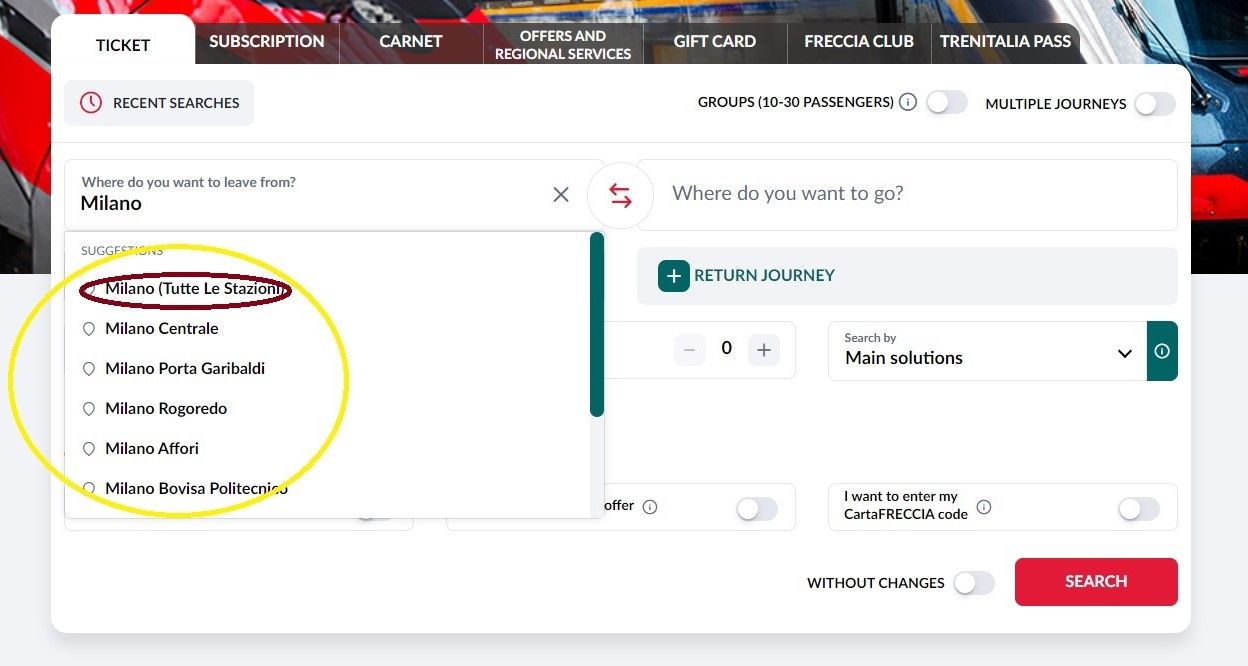 Having clicked the red 'Search' button, you will then see the options for taking your chosen journey, but this is a screen on which it will pay off to take the time to make use of the info you are being provided with.
The first two things worth paying attention to have been highlighted above; and they are...

The other key features of the Trenitalia search results page have been highlighted below... 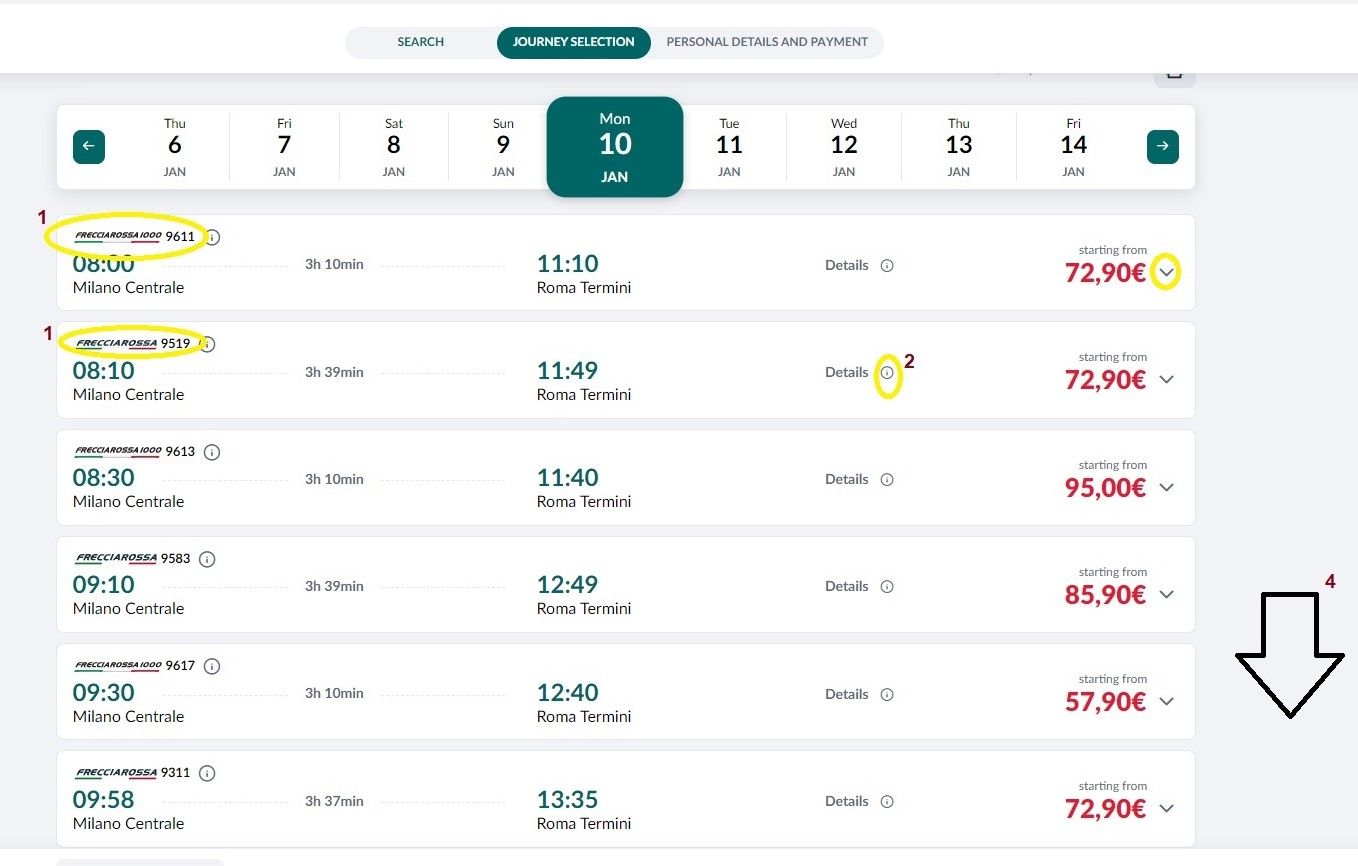 Having clicked on a price on the journey search results, in order to book tickets for your chosen departure,you will be at this key step of the booking process, with options to:

What has been highlighted above is:

An option to upgrade a ticket

Something to look out for is that Trenitalia may alert you to the price difference of upgrading your ticket to a superior travel class.
Though if you do see this screen, look out for the fact that a tad cheekily, Trenitalia assumes that you will want to proceed with the upgrade, so that can be the default red button.
So if you want to stick with the travel class you initially selected, you need to be proactive and switch the options. 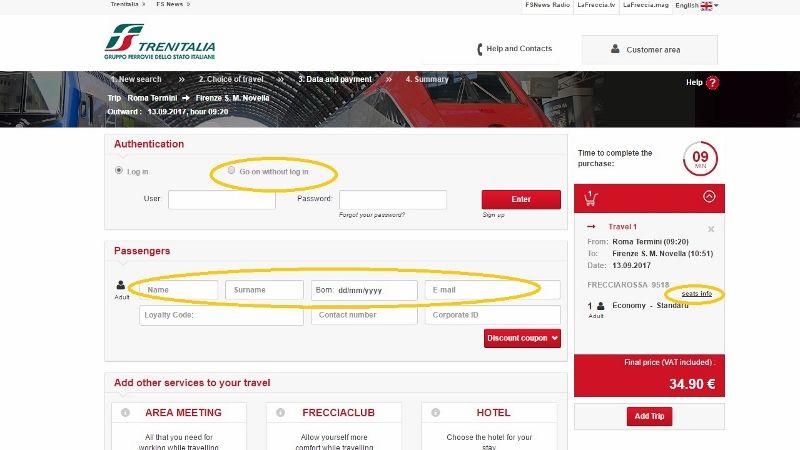 This is the final page you will see before proceeding to the checkout, by clicking the 'Add Trip' box below the price on the right hand column.

The TWO key features to note on this page are

(1) you don't have to register with Trenitalia to make a booking - you can select 'go on without log in'.
Though if you select this, you will still have to enter the circled passenger information.

(You will be given the opportunity to register on the booking page; and doing so can speed up the process when making future bookings).

(2) If you didn't choose seats on the preceding page, you can check the seats you have been automatically assigned, by clicking 'seat info' over to the right.
However, note that terms of the ticket you have selected, are not visible on this page; which emphasises the importance of checking the terms of your ticket on the preceding page!